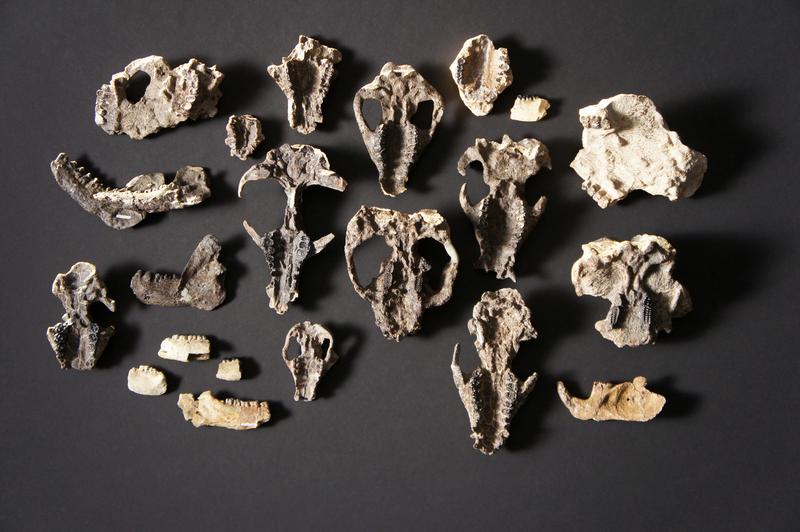 WASHINGTON (Reuters) – A revelatory cache of fossils dug up in central Colorado details as never before the rise of mammals from the post-apocalyptic landscape after an asteroid smacked Earth 66 million years ago and annihilated three-quarters of all species including the dinosaurs.

Fossilized mammal skull fossils and lower jaw retrieved from the Corral Bluffs site in Colorado dating from the aftermath of the mass extinction of species 66 million years ago is seen in a picture released October 24, 2019. HHMI Tangled Bank Studios/Handout via REUTERS.

The fossils, described by scientists on Thursday, date from the first million years after the calamity and show that the surviving terrestrial mammalian and plant lineages rebounded with aplomb. Mammals, after 150 million years of subservience, attained dominance. Plant life diversified impressively.

With dinosaurs no longer eating them, mammals made quick evolutionary strides, assuming new forms and lifestyles and taking over ecological niches vacated by extinct competitors. Within 700,000 years of the mass extinction, their body mass had become 100 times bigger than the mammals living immediately after the mass extinction.

“Were it not for the asteroid, humans would never have evolved,” said Ian Miller, curator of paleobotany and director of earth and space sciences at the Denver Museum of Nature & Science. “One message I would like people to take from this is that their earliest ancestors – and by ancestors we’re talking fuzzy little squirrel-like critters – had their origins in the wake of the extinction of the dinosaurs.”

The thousands of well-preserved animal and plant fossils, unearthed just east of Colorado Springs, illuminate a time interval that had been shrouded in mystery.

“Essentially, we were able to tease out details of the emergence of the modern world – the age of mammals – from the ashes of the age of the dinosaurs,” Miller said.

Sixteen mammal species were discovered, with skulls and other bones fossilized after being buried in rivers and floodplains. Until now, only tiny mammal fossil fragments from that time had been discovered.

“For the first time, we were able link together time, fossil plants, fossil animals and temperature in one of the most critical intervals of Earth’s history,” said Tyler Lyson, the museum’s curator of vertebrate paleontology and lead author of the research published in the journal Science.

The asteroid strike, which ended the Cretaceous Period and opened the Paleogene Period, laid waste to the world, eradicating the dinosaurs except their bird descendants, seagoing reptiles that dominated the oceans, and important marine invertebrates and numerous plant species.

Plant life also was hit hard by the global environmental catastrophe that followed the crash of the six-mile-wide (10-km) asteroid off Mexico’s coast, with new forms evolving in the aftermath. The earliest-known legumes – bean pods – were among the Colorado fossils.

Evolutionary events set in motion by the mass extinction led much later to the appearance of the primate lineage that includes monkeys, apes and eventually, roughly 300,000 years ago, the appearance of our species Homo sapiens.

SHADOW OF THE DINOSAURS

Mammals had lived in the large shadow of the dinosaurs, never getting bigger than a small dog until the mass extinction. The mammals that survived the asteroid were mainly small omnivores – the largest being the size of a rat and weighing about a pound (0.5 kg).

“When the dinosaurs go extinct, mammals proliferate, and fast,” Miller said, for the first time becoming the top predators and herbivores on the landscape.

The largest mammal among the Colorado fossils was wolf-sized Eoconodon, followed by Taeniolabis, the size of a capybara. The largest predators were 5-foot-long (1.5 meters) crocodilians, with blunt teeth useful for cracking turtle shells rather than gobbling mammals.

Egg-shaped rocks called concretions that over time formed concentrically around some kind of nucleus – in this case mammal skulls – provided a bonanza. Most of the 16 mammal species belonged to a diverse group called “archaic ungulates” related to modern-day hoofed mammals like deer, cows and pigs. The plant fossils included pollen, leaf impressions and petrified wood.

The mass extinction was the second worst on record – exceeded by one 252 million years ago thought to have been caused by extreme volcanism – that helped pave the way for the first dinosaurs.