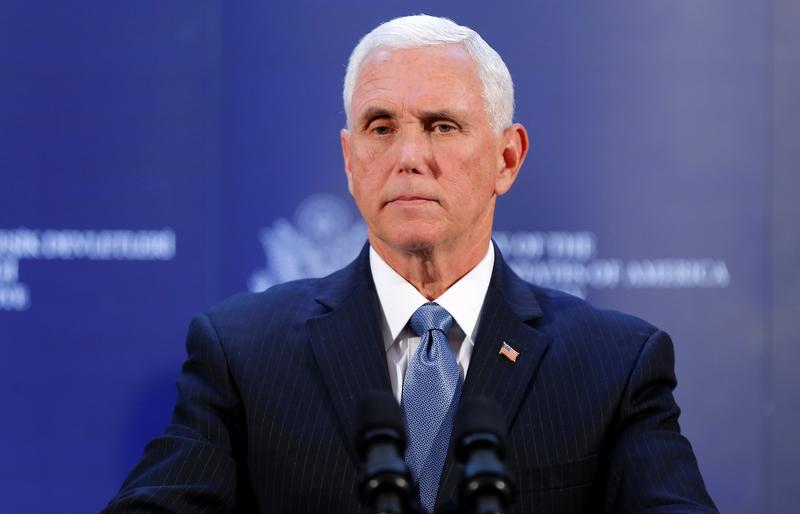 WASHINGTON (Reuters) – U.S. Vice President Mike Pence on Thursday accused China of curtailing “rights and liberties” in Hong Kong and blasted U.S. company Nike and the National Basketball Association for falling in line with Beijing in a disagreement over free speech.

In a major policy speech on China that touched on an array of disputes ahead of talks with Beijing to ease a trade war, Pence said the United States does not seek confrontation or to “de-couple” from its main economic rival.

But he pulled no punches when addressing some of the political rifts between the two countries.

Criticizing China’s construction of a “surveillance state,” and “increasingly provocative” military action, Pence held up Taiwan’s Democracy as a better path for the Chinese and took Beijing to task for its handling of pro-democracy protests that have rocked Hong Kong for more than four months.

“Hong Kong is a living example of what can happen when China embraces liberty,” he said. “And yet, for the last few years, Beijing has increased its interventions in Hong Kong and engaged in actions that curtail the rights and liberties that Hong Kong’s people were guaranteed through a binding international agreement.”

He said the United States stands with the protesters in Hong Kong, millions of whom have taken to the streets in sometimes violent clashes over what they see as China’s tightening grip.

“We stand with you, we are inspired by you. We urge you to stay on the path of non-violent protest,” Pence said in his address at a Washington think tank.

He also slammed China for its treatment of Muslim Uighurs in the Xinjiang region.

Pence directed some of his harshest words at sports apparel giant Nike (NKE.N) and the NBA, which he accused of siding with China’s Communist Party over freedom of speech in Hong Kong.

Pence, who is often the face of the Trump’s administration’s tougher policies on China, said the NBA and Nike had failed to defend basketball team Houston Rockets General Manager Daryl Morey, after he tweeted support of Hong Kong protesters earlier this month.

“Some of the NBA’s biggest players and owners, who routinely exercise their freedom to criticize this country, lose their voices when it comes to the freedom and rights of other peoples,” he said.

By “siding with the Chinese Communist Party and silencing free speech, the NBA is acting like a wholly owned subsidiary of the authoritarian regime,” Pence said.

Nike stores in China removed Rockets merchandise after Beijing criticized Morey, Pence noted. “Nike promotes itself as a so-called social-justice champion, but when it comes to Hong Kong, it prefers checking its social conscience at the door,” he said.

Pence said “far too many American multinational corporations have kowtowed to the lure of China’s money and markets by muzzling not only criticism of the Chinese Communist Party, but even affirmative expressions of American values.”

Nike, the NBA and the Chinese Embassy in Washington did not immediately respond to requests for comment about the remarks.

A new round of talks between Treasury Secretary Steven Mnuchin and Chinese officials to try to end the bruising trade dispute is set for Friday.

The United States launched a trade war with China 15 months ago, alleging unfair trading practices such as theft of U.S. intellectual property and generous industrial subsidies at the expense of foreign competitors.

Fears of antagonizing Beijing prompted the White House in June to postpone a major speech by Pence on China ahead of a meeting between the leaders aimed at getting trade talks back on track.

Many China watchers had expected Pence to tread lightly on sensitive topics at his Wilson Center speech Thursday, in sharp contrast to his bombastic tone in his first major China policy address a year ago at the Hudson Institute. But some saw signs of a rapprochement as well.

“In contrast to the Hudson Institute speech of October 2018, the Vice President’s equally hard-hitting Wilson speech offered the beginnings of a positive vision for U.S.-China relations,” said Robert Daly of the Kissinger Institute on China.

Pence said the United States is “not seeking to contain China’s development.” “We want a constructive relationship with China’s leaders,” he said, calling on Beijing to “seize this unique moment in history to start anew by ending the trade practices that have taken advantage of the American people for far too long.”