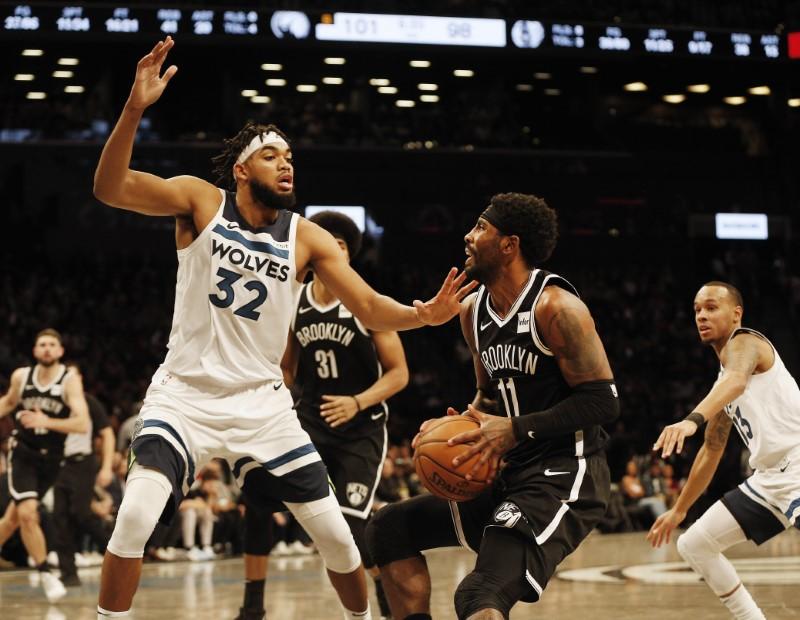 Karl-Anthony Towns collected 36 points and 14 rebounds as the visiting Minnesota Timberwolves overcame a 50-point performance from Kyrie Irving in a 127-126 overtime victory over the Brooklyn Nets on Wednesday in the season opener for both teams.

Irving had the ball in his hands on the final possession, but the six-time All-Star lost his footing off the dribble and forced a shot that caromed off the rim as time expired.

Irving shot 17 of 33 from the field in his first game since he and the injured Kevin Durant elected to sign with Brooklyn in the summer. The point total was the seventh best in franchise history and the most by a Nets player making his debut, eclipsing the 30 posted by Hall of Famer Nate “Tiny” Archibald with then-New Jersey in 1976 as well as D’Angelo Russell in 2017.

Will Barton totaled 19 points for the Nuggets, six in the closing quarter. Jamal Murray scored seven of his 14 points in the final quarter.

Trail Blazers star Damian Lillard led all scorers with 32 points, 13 in the fourth. Hassan Whiteside had 16 points and a game-best 19 rebounds. Rodney Hood scored 13 points, and CJ McCollum had 12.

Dwayne Bacon drained several late-game shots as part of Charlotte’s record-setting performance, and P.J. Washington scored 27 in his NBA debut as the Hornets slipped past visiting Chicago in the season opener for both teams.

Charlotte set an NBA record by making 23 baskets from 3-point range in a season-opening game. The previous mark was 19. Washington made seven 3-pointers, an NBA record for a player in his debut.

Overall, the Hornets were 23-for-44 from long distance, with the 23 treys also representing a franchise record. Washington’s point total was the most by a Hornets rookie in an NBA debut. Lauri Markkanen led Chicago with 35 points and 17 rebounds.

Josh Richardson scored 17 points while Joel Embiid added 15 points, 13 rebounds and three blocked shots despite playing in foul trouble for much of the second half. Tobias Harris also recorded a double-double with 15 points and 15 rebounds, and former Celtic Al Horford had 16 points.

Gordon Hayward paced the Celtics with 25 points while Jayson Tatum added 21 points and 10 rebounds. Enes Kanter and Kemba Walker each contributed 12. Walker, who made his debut with the Celtics after eight seasons with the Charlotte Hornets, shot just 4 of 18.

Drummond delivered in all phases. He shot 12-for-18 from the floor, 8-for-10 from the free-throw line, blocked four shots and added three steals. He produced the NBA’s first 30-point, 20-rebound performance in a season opener since Charles Barkley in 1992.

Luke Kennard knocked down six 3-pointers and finished with 30 points for the Pistons. The frontcourt duo of Domantas Sabonis and Myles Turner led Indiana with 27 and 25 points, respectively.

Markelle Fultz totaled 12 points to go with a game-high six assists off the bench. Terrence Ross had 10 points as the Magic, a playoff team last season, used a 36-21 advantage in points from reserves to pull away from the Cavaliers.

Doncic, the reigning NBA Rookie of the Year, made 12 of 19 field-goal attempts, including 4 of 9 from 3-point range. Dallas reserves Dorian Finney-Smith and Justin Jackson added 10 points each.

Bradley Beal scored 19 points on 7-of-25 shooting for Washington, which has lost on nine of its past 10 visits to Dallas.

LaMarcus Aldridge poured in 22 points, and Bryn Forbes added 20 to lead San Antonio to a come-from-behind win over visiting New York in the season-opening game for both teams.

The Spurs used a 17-0 run over a 4 1/2-minute span of the fourth quarter to turn a five-point deficit into a 109-97 lead, with five different players scoring points in the decisive surge.

Dejounte Murray had 18 points and eight rebounds for San Antonio, and DeMar DeRozan and Rudy Gay hit for 13 points each. Marcus Morris scored 26 points while Julius Randle added 25 points and 11 rebounds for the Knicks. New York rookie RJ Barrett had 21 points in his first regular-season game.

Donovan Mitchell opened his third NBA season with a bang, scoring six of his game-high 32 points in the final minute as Utah held off Oklahoma City in Salt Lake City.

Mitchell also grabbed 12 rebounds for Utah, which got 16 points from Bojan Bogdanovic. Royce O’Neale hit all six of his field-goal tries and scored 14, and Emmanuel Mudiay came off the bench to chip in 12 points.