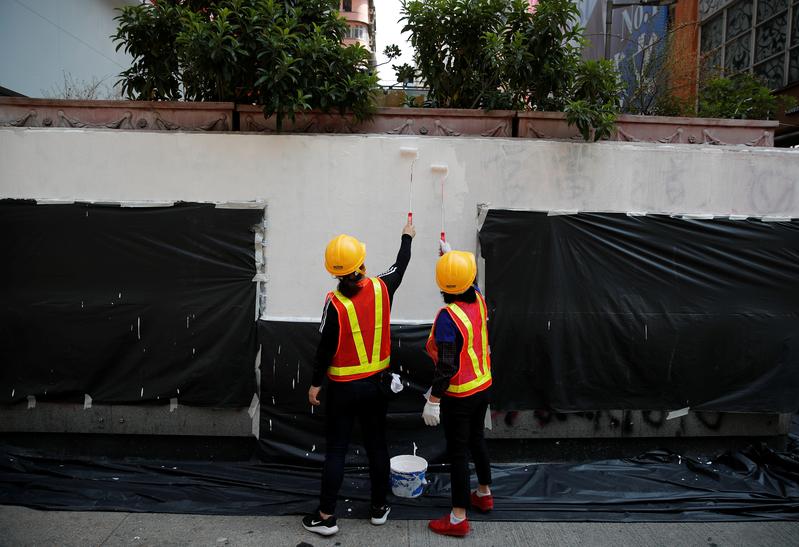 HONG KONG (Reuters) – Hong Kong protesters plan to rally on Thursday in support of demonstrators pushing for a separate Catalonia in northeastern Spain as a Chinese official denounced months of “mad violence” in Hong Kong and forces pushing for independence.

Workers paint to cover words which were written during Sunday’s anti-government protest on the walls of a bank branch in Hong Kong, China, October 23, 2019. REUTERS/Umit Bektas

The protests in Spain’s wealthiest region of Catalonia bear some resemblances to the demonstrations in Chinese-ruled Hong Kong, where millions have taken to the streets for five months to vent their anger over what they see as Beijing’s tightening grip on the city.

Most protesters in Hong Kong want greater democracy, among other demands, although a small minority is calling for independence, a red line for Communist Party leaders in Beijing.

“It has become more and more clear that it is not a peaceful demonstration in Hong Kong at all, but a violent crime that is mad,” Xie Feng, the Commissioner for the Chinese Foreign Ministry in Hong Kong, said in a speech on Thursday.

“…The real purpose of the Hong Kong opposition and the foreign forces behind it is to disrupt Hong Kong, overthrow the legitimate government, and seize the power of governance. It is to turn Hong Kong into an independent or semi-independent political entity and subvert ‘one country, two systems’. This is a delusion. Hong Kong is China’s Hong Kong.”

Under the terms of the 1997 handover from Britain, Hong Kong was allowed to retain extensive freedoms not enjoyed in mainland China under the “one country, two systems” formula, including an independent judiciary and right to protest.

But many Hong Kong residents are angry at what they see as a relentless march towards mainland control.

A poster advertising Thursday’s demonstration of solidarity with protesters in Catalonia featured the slogan; “United We Stand Against Tyranny”.

Organizers have called on people to rally from 11:00 GMT at Chater Garden in the heart of the financial center. Their rally is one of the few to have obtained a permit from authorities in recent weeks.

Independence is a highly divisive issue in Catalonia, which, like Hong Kong, has more than 7 million inhabitants, its own language, parliament and flag.

Some demonstrators waved the Catalan flag at a protest in Hong Kong on Sunday. Students in Catalonia have boycotted classes and protesters have focused on strategic targets to cause maximum disruption, including the airport serving Barcelona – similar to strategies used by Hong Kong activists.

Demonstrators in Catalonia, who protested for nine consecutive nights from Oct. 14, are angry over the conviction of their leaders for sedition and at what they see as attempts to thwart their ambition for greater autonomy from the rest of Spain.

Some Hong Kong protesters went online to urge people not to attend Thursday’s show of support for the Catalan movement, saying it was too provocative and risked denting international support for their own cause.

Hong Kong authorities formally banned a group promoting independence from China in September last year, the first time a political organization has been outlawed since the 1997 handover.

Hong Kong’s legislature on Wednesday formally withdrew planned legislation that would have allowed extraditions to mainland China, a bill that triggered the unrest, but the move was unlikely to end the protests because it met just one of the pro-democracy demonstrators’ five demands, which include universal suffrage.