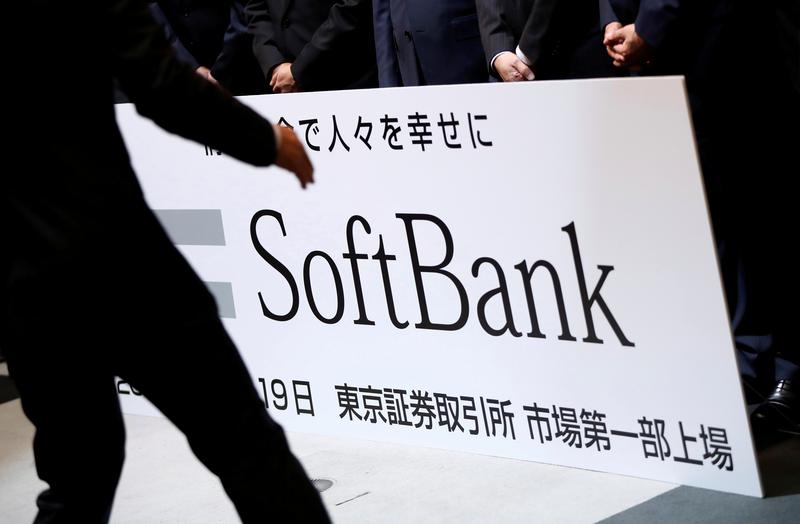 TOKYO (Reuters) – Shares of SoftBank Group Corp fell 3% in morning trade on Wednesday as the tech conglomerate agreed to spend more than $10 billion to take over beleaguered office-space sharing startup WeWork, adding to its financial pressures.

FILE PHOTO: SoftBank Corp placard is prepared during a ceremony to mark the company’s debut on the Tokyo Stock Exchange in Tokyo, Japan December 19, 2018. REUTERS/Issei Kato

The deal, structured to give SoftBank an 80% stake in – but not control of – WeWork, takes its total investment to more than $13 billion, with the money-losing startup now valued at just $8 billion.

SoftBank’s shares have fallen 30% from their July peak as investor scepticism grows over the path to profitability for its cash-burning marquee investments like WeWork and publicly listed Uber Technologies Inc.

(For a graphic on ‘SoftBank Group stock price’ click tmsnrt.rs/35XXuS3)

The deal adds to the financial strains at the highly leveraged group, which is structured to avoid having to consolidate WeWork on its books or take responsibility for WeWork’s onerous lease obligations.

Although SoftBank has an army of retail investors in yield-strapped Japan willing to buy its junk bonds, it already holds about 5 trillion yen ($46 billion) of net debt on its balance sheet – more than half its 9 trillion yen market capitalization.

The cost of default protection on SoftBank Group has risen, with the 5-year credit default swap jumping 17.7 points in a week to the highest level since January.

The disarray at WeWork, which is scrambling for cash following a flopped IPO attempt, comes as SoftBank founder and CEO Masayoshi Son struggles to raise money for a successor to his $100 billion Vision Fund, sources told Reuters this month.

Son has often spoken of his strategy of betting on ambitious founders, who will use SoftBank’s generous cash injections to push for rapid growth – an approach that come under scrutiny from skeptical investors.

At WeWork, SoftBank has acted to remove co-founder and face of the company Adam Neumann, first as chief executive and now from the board of WeWork’s parent, following the botched IPO and concerns over corporate governance.

SoftBank’s chief operating officer, Marcelo Claure, will become WeWork’s executive chairman, adding to his hodgepodge of roles including heading a $5 billion Latin America-focused fund and getting the tie-up between Sprint Corp and T-Mobile US Inc through regulators.

WeWork is “a searing indictment of SoftBank’s valuation and screening methodology, which needs to shift towards being based on fundamentals,” independent analyst Richard Windsor wrote in a blog post.

SoftBank, which argues its valuation methods are based on standard industry practice, faces chunky writedowns on many of its tech bets when it reports second-quarter earnings next month.