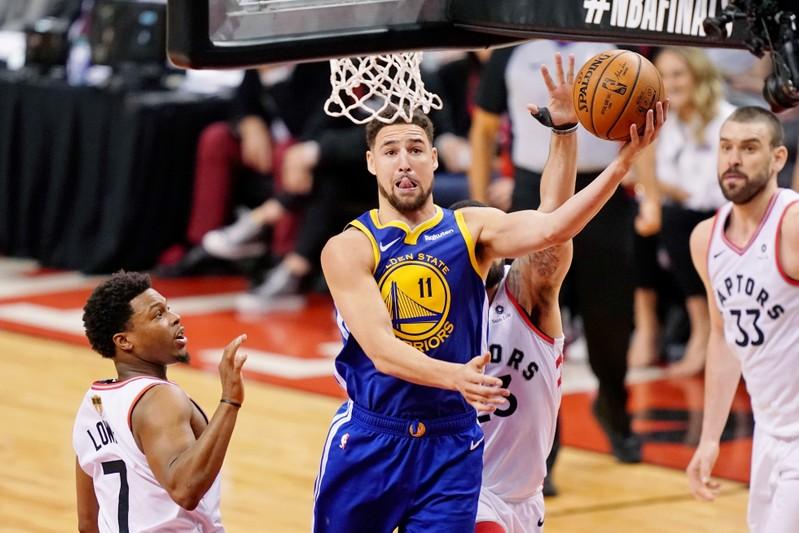 Thompson will be nine months removed from a torn left anterior cruciate ligament in April, at which point the Warriors aren’t comfortable risking re-injury by playing the All-Star guard before he’s 100 percent healthy. “It’s unlikely that he’s going to play this year,” Kerr said. “So we have to understand that.”

Thompson had surgery July 2 and said he is targeting a return after the NBA All-Star break in February. Kerr knows where Thompson stands having suffered the same injury while in college.

“You have to look at it realistically,” Kerr told NBC. “I had an ACL (tear) in college, and I missed a whole season. Generally, an ACL for a basketball player is a full-year recovery, and if it’s a full year for Klay, that puts them out for the season.”

—Detroit Pistons forward Blake Griffin will miss the start of the season because of hamstring and knee soreness that will be re-evaluated in the first week of November, the team announced.

Griffin earned his sixth All-Star nod last season, when he averaged a career-high 24.5 points, 7.5 rebounds and 5.4 assists in 75 games, his most in a season since making 80 appearances for the Los Angeles Clippers in the 2013-14 season.

Griffin, 30, is entering his second full season with the Pistons after being traded from the Clippers in late January 2018. The oft-injured big man has career averages of 21.9 points, 9.0 rebounds and 4.5 assists in 604 games.

Williamson will be sidelined up to eight weeks with a torn meniscus in his knee. The 6-foot-7, 280-pounder could return as soon as six weeks, the team said Monday.

“The notion that this happened because Zion is in poor condition is asinine,” Griffin said before the Pelicans opened the season at Toronto. “He wasn’t in poor condition when he went 12 of 13 last week. That’s not what it is. He’s just a very unique body type and certainly from a physics perspective.”

—Michael Jordan isn’t ready to put Steph Curry in the Hall of Fame, though the two-time NBA Most Valuable Player and three-time NBA champion has averaged 23.5 points, 6.6 assists and 4.5 rebounds per game with the Golden State Warriors.

Jordan, a five-time MVP who won six titles with the Chicago Bulls, appeared on “Today” and refused to walk back comments in 2013 that he would be unbeatable in a pickup game and offered a list of players he felt would help him be impossible to beat. He said Hakeem Olajuwon, Magic Johnson, Scottie Pippen and James Worthy were the only names on that list.

“So, Steph Curry shouldn’t be offended when he watches this,” Jordan said. “I hope not. He’s still a great player. Not a Hall of Famer yet though. He’s not.”

—Kyle Kuzma could return to the Los Angeles Lakers soon despite missing Tuesday night’s season opener against the Clippers with a stress reaction in his left foot.

Kuzma was cleared for noncontact practice last week and is officially day-to-day, Lakers coach Frank Vogel said in ruling Kuzma out for the first game of the regular season.

“Right now, we’re just talking about ramping up his activity, and we’re not going to look past two days from now,” Vogel said. “We’re going to try to increase his workload and activities this week, and we’ll see where we’re at.”