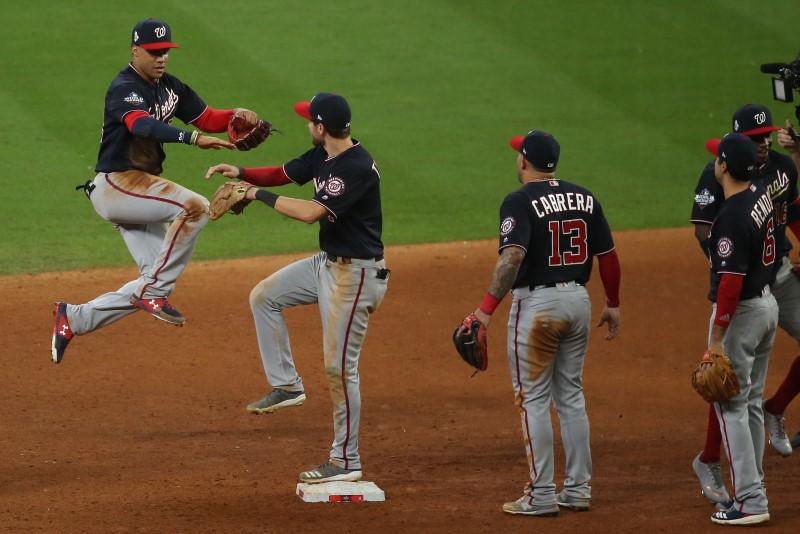 But the 20-year-old left fielder regrouped in a big way, smashing a monster, 417-foot solo home run his second time around to tie the game 2-2 and give his underdog Nationals new life.

His third time up the left-hitting Soto fired a double off the left field wall to hand the Nationals a 5-2 lead they would not relinquish en route to a thrilling 5-4 win at Minute Maid Park and an early 1-0 lead in the best-of-seven series.

“After the first at-bat I said hey, it’s just another baseball game, just go and enjoy,” Soto, who finished with three hits, three RBIs and a stolen base, said in an on-field interview with Fox after the game.

“In the first at-bat, I’m not going to lie, I felt a little bit shaky in my legs.

“But I just had to control my emotions and try to be focused on the game and try to drive the ball.”

Soto said the key was forgetting about the bright lights and the big stage and focusing on his opponent.

“It’s just the pitcher and me. He’s trying to get me out,” he told a press conference after the game.

“No one else is around.”

The Dominican Republic native, who will turn 21 on Friday, became the second-youngest player to hit a home run in his first World Series game. The Atlanta Braves’ Andruw Jones was just 19 when he went deep in Game One of the 1996 World Series.

Despite Soto’s youth, the Nationals roster was the oldest in baseball this year with an average player age of 30.1 years.

The Nationals, who completed a four-game sweep of the St. Louis Cardinals in the championship series and haven’t played since Oct. 14, benefited from the long break, Soto said.

“You can tell the rest helped a little bit for the guys because we have a lot of veteran players,” he said.

“They just get rest the best they can and just come play.”

Game Two is Wednesday in Houston.