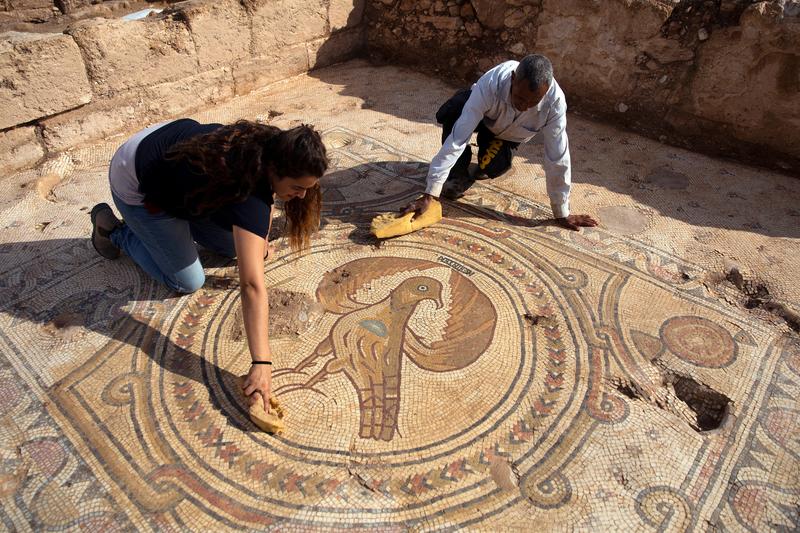 Two Israel Antiquities Authority workers clean a mosaic floor in the remains of a 1500-year-old church which archeologists say was built in honour of a ‘glorious martyr’, whose identity is unknown, in Ramat Beit Shemesh, Israel October 23, 2019. REUTERS/Ronen Zvulun

JERUSALEM (Reuters) – A Byzantine-era church built in honor of an unnamed martyr has been unearthed near Jerusalem after a three-year excavation, Israeli researchers said on Wednesday.

The dig uncovered floors decorated with vast mosaics depicting birds, fruit and plants, colorful frescoes, and a curious Greek inscription that has baffled the researchers.

“We found one inscription in the courtyard of the church which dedicates the site in the memory of a ‘glorious martyr,’” said Benyamin Storchan, who directed the excavation. “The martyr is unnamed and it’s still a mystery.”

The Israel Antiquities Authority (IAA) dates the shrine, located about 10 miles west of Jerusalem, to the 6th century.

An underground crypt found below the main part of the church is believed to have housed the martyr’s remains. “This is the holiest place in the church,” said Storchan, adding that pilgrims likely frequented the site.

Though the martyr in question is unknown, Storchan said the lavishness of the complex may indicate this person was an important figure. Another inscription showed Byzantine emperor Tiberius II Constantinus had helped fund the church’s later expansion.

“We know of a few hundred churches in the Holy Land but this church by far surpasses most of them by its state of preservation and the imperial involvement which funded it,” said Storchan.