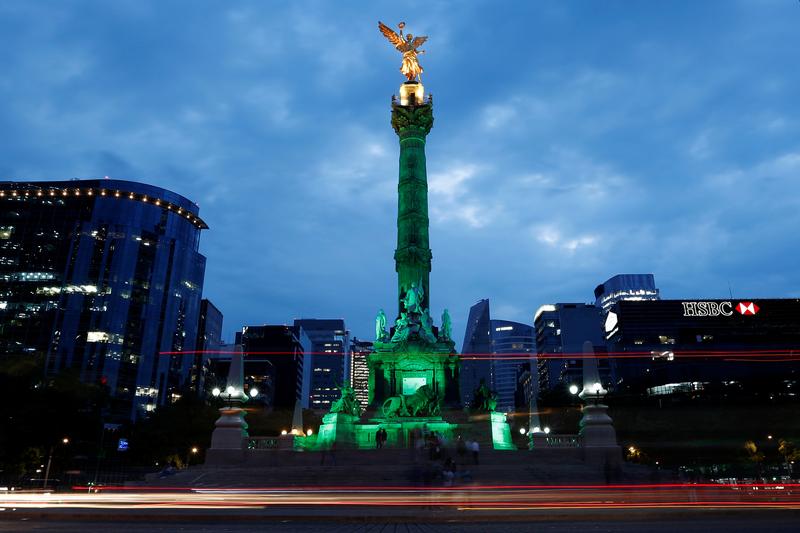 Green lights are projected at the Angel of Independence monument in support in the Paris Climate Agreement, after U.S. President Donald Trump announced his decision that the United States will withdraw from the Paris Agreement in Mexico City, Mexico June 1, 2017. REUTERS/Carlos Jasso

Some of these terms are used interchangeably. The outline below detangles the definitions.

WHAT DOES THE PARIS AGREEMENT SAY?

The 2015 Paris Agreement, a global climate pact, has a legally binding aim of keeping global warming “well below” 2 degrees Celsius over pre-industrial times and to “pursue efforts” to limit the temperature increase further to 1.5 C.

It also sets out the aim of reaching a peak in greenhouse emissions “as soon as possible” and achieving a balance between output of manmade greenhouse gases and absorption – by forests or the oceans – by the second half of this century.

Decarbonisation targets refer to lowering the amount of CO2, or all greenhouse gas (GHG) emissions, produced by a given sector or company.

A country-based CO2 or GHG intensity target seeks to reduce the amount of carbon emitted by a country per unit of gross domestic product.

A company intensity target seeks to reduce the amount of carbon emitted during the making of certain products.

This summer, Britain became the first major economy to legislate a target for achieving net-zero greenhouse gas emissions by 2050. Meeting the target will require huge changes to the way Britons eat, travel and use energy.

“Net zero” means any shortfall in the resulting emissions reduction will be balanced by schemes to offset an equivalent amount of GHGs from the atmosphere. Examples include planting trees or using technology such as carbon capture and storage.

Some companies have a “net zero” carbon emissions target, which refers only to CO2 and not other greenhouse gases.

E-commerce firm Amazon has pledged to make itself carbon-neutral by 2040 using renewable electricity and electric vehicles for its deliveries. For emission reductions it cannot make itself, the company said it would invest $100 million to restore forests and wetlands.

Carbon footprint refers to the amount of CO2 produced, usually during the manufacture of a product. A target to reduce a company’s carbon footprint can mean different things depending on the scope of what’s included.

Scope 1 includes direct emissions under a company’s or organisation’s control such as fleet vehicles or gas boilers on site.

Scope 2 includes indirect emissions such as those created from electricity purchased.

Scope 3 includes all other indirect emissions from sources the company does not control or own, such as the emissions generated by staff flying for work or emissions created by consumers using the petrol or gas a company has sold.

Companies striving to be carbon positive aim to go beyond achieving net-zero emissions. They can do this by reducing their own emissions as much as possible and then buying offsets or supporting projects that cut emissions by more than the company needs to reach net zero.

This refers to reaching maximum emissions by a certain date and then seeing that amount fall.

China targets peak emissions by around 2030 although experts say it is likely to achieve that sooner.