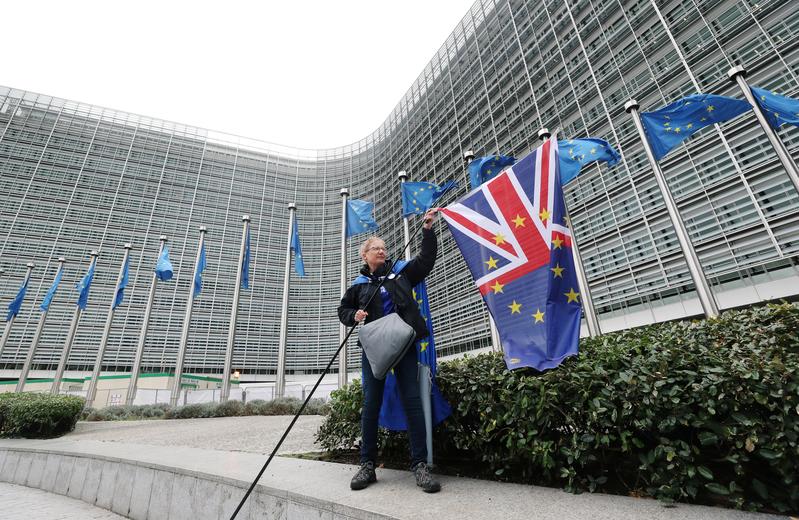 BRUSSELS (Reuters) – Will the other members of the European Union grant Britain an extension to leave the bloc beyond its Oct. 31 deadline and if they do, what will the delay look like?

FILE PHOTO: A woman holds a flag during a protest against Brexit outside the EU Commission headquarters in Brussels, Belgium October 9, 2019. REUTERS/Yves Herman

European Council President Donald Tusk said on Tuesday he would recommend granting the delay requested by British Prime Minister Boris Johnson following a defeat in parliament that made ratification of his exit deal by Oct. 31 almost impossible.

British lawmakers on Tuesday voted narrowly in favour of legislation for a Brexit deal that Johnson clinched with the EU last week, but minutes later voted against his tight timetable for parliamentary approval.

That puts the ball back in the EU’s court, days after Johnson was forced by opponents into asking the bloc for a delay until Jan. 31. Johnson had hoped to make his request redundant by passing the Brexit law fast enough to leave on time.

Here are questions and answers on what the other 27 member states will do following the latest twist in the Brexit drama.

Even if Johnson gets his deal through the House of Commons in coming days, it would still have to be approved by the European Parliament, which is sitting this week but not next.

An extraordinary session of the EU assembly could be called, but an EU official said on Tuesday that EU lawmakers will want time to scrutinise what is a very complex agreement and some will “smell an opportunity” to slam the brakes on Brexit.

WILL THE EU 27 GRANT THE DELAY?

The EU 27 have already agreed twice to postpone Brexit from the original deadline of March 29 this year.

Frustration has mounted over the distraction of a process that has dragged on for 3-1/2 years since Britons voted in a referendum to leave the EU, and the bloc said its second extension would be its last. French President Emmanuel Macron has been the most impatient among the 27 on the issue.

However, they are unlikely to reject Johnson’s request for a delay.

That’s because while they are heartily sick of Brexit, they are also keen to avoid a disorderly no-deal departure on Oct. 31 that would buffet their economies as well as Britain’s. They are also determined not to take the blame for a damaging ‘hard Brexit’.

It is still not clear if the EU 27’s leaders would need an emergency summit before Oct. 31 to decide on an extension, or whether they would – as indicated by Tusk on Tuesday – agree on the matter by what is known as “written procedure”.

WOULD THERE BE CONDITIONS TO AN EXTENSION?

France and other members of the 27 have made it clear in recent weeks that there needs to be a shift in Britain’s political landscape for an extension to be granted. This could come from a general election or a new referendum.

“We’re being asked for an extension: for what purpose? What is the justification?,” French minister for European affairs Amelie de Montchalin told the French Senate on Tuesday, according to a transcript provided by her spokesman.

“We know that time alone won’t provide the solution, but a political decision. We can’t extend this situation indefinitely,” she said.

It is unclear how far the rest of the group would require a shift in Britain’s political deadlock over Brexit to approve a delay, but it’s important to remember that an extension must be approved by all 27 members of the remaining member states.

The EU 27 might grant a shorter period than what has been requested – as little as a month or even less to keep pressure on Britain to approve Johnson’s deal.

Anand Menon, director of UK in a Changing Europe and a Brexit expert, told Reuters that the EU could grant an extension until Jan. 31 and tell London it could leave earlier if it was ready – a solution some refer to as a “flextension”.

WHAT ABOUT A LONGER EXTENSION?

The bloc could go for the three months requested by Johnson, but it may kick the can much further down the road: six months or even a year could be on the cards if the EU decides it wants to move on with its own affairs and give Britain space to sort itself out.

A longer postponement might be possible if it was clear that either a general election or a new referendum was at hand.

However, a deadline for the EU is shaping around its next long-term budget from 2021, which will hang on whether Britain is staying or leaving. Some EU diplomats and officials say this means Britain must be in or out by the middle of next year.