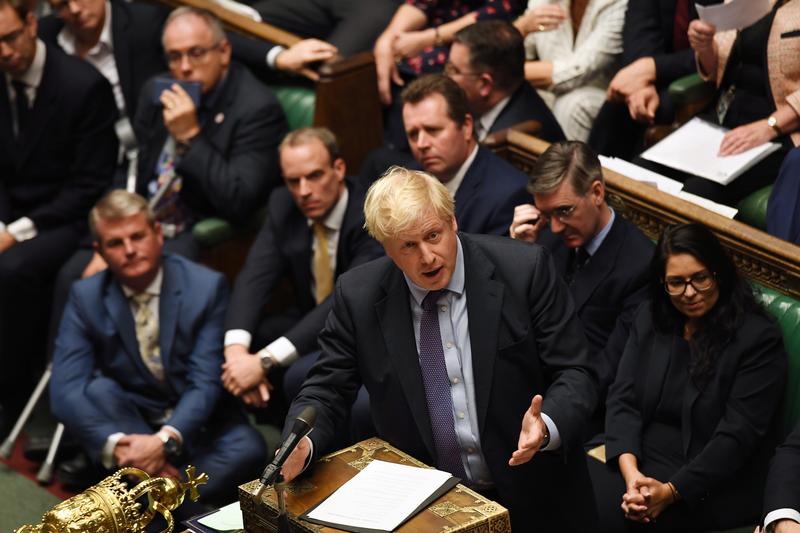 BRUSSELS (Reuters) – EU member states on Wednesday delayed a decision on whether to grant Britain a three-month Brexit extension, while Prime Minister Boris Johnson said if the deadline is deferred to the end of January he would call an election by Christmas.

Britain appears closer than ever to resolving its 3-1/2-year Brexit conundrum, after Johnson clinched a deal with the European Union on the terms of its exit last week and secured an early signal of support for it from parliament.

But there are still hurdles to clear, and Johnson’s ability to deliver on a “do-or-die” pledge to get Britain out of the EU by Oct. 31 is in doubt, after parliament rejected a three-day timetable to enact his agreement on Tuesday.

European Council President Donald Tusk said on Twitter he was recommending that the leaders of the EU’s 27 other member states back a delay, which Johnson says he does not want but was forced by parliament to request.

Senior EU diplomats said the most likely scenario was that the bloc would grant a three-month delay, with Britain permitted to leave sooner if it could enact legislation faster. There was also a chance that some EU countries, notably France, could demand a shorter extension, possibly of just days or weeks.

Johnson’s spokesman said if the EU offers a delay until the end of January there would need to be an election in Britain, and this could be held before Christmas.

Johnson paused the bill that would implement the agreement he reached with the other EU members, after votes on Tuesday in which parliament accepted the deal in principle but rejected the three-day timetable to enact it.

The government argued a tight schedule was necessary to meet next week’s deadline but lawmakers said they needed more time.

EU ENVOYS TO MEET ON FRIDAY

Ambassadors of the 27 made no decision on an extension at a meeting in Brussels on Wednesday, senior diplomats said. The envoys will meet again on Friday and hope to decide then, and avoiding an emergency summit of leaders on the issue.

The one big uncertainty is whether France will agree. A source at President Emmanuel Macron’s office said on Tuesday Paris was ready to grant an additional few days to facilitate the British parliament’s vote but opposed any extension beyond that. On Wednesday, French officials stuck to that view, despite Tusk’s recommendation for a longer delay.

“The additional delay will be a few days, a few weeks maybe, but not up to January as some people are saying, that’s just not possible,” Pieyre-Alexandre Anglade, a member of the French parliament who handles European affairs for Macron’s party, said.

An EU official said Paris needed more time to decide its position because Macron is visiting the French island of La Reunion in the Indian Ocean.

Any extension must be agreed unanimously among the EU 27. They have agreed twice to postpone Brexit from the original deadline of March 29 this year. Both times, the French complained but eventually relented.

A “GET BREXIT DONE” ELECTION

Johnson confounded some of his critics by emerging last week with a deal with the EU, which differs from an agreement reached by his predecessor Theresa May, mainly over how it handles the land border of British-ruled Northern Ireland.

That has cost him the support of a Northern Irish party that had propped up his minority government, but could unlock the support of parliament that eluded May.

In the latest day of Brexit drama in Britain on Tuesday, lawmakers handed Johnson the first major parliamentary victory of his premiership by signalling their support for his deal in an early legislative hurdle.

But that was overshadowed minutes later when lawmakers defeated him on his timetable. Johnson had hoped to make the delay request unnecessary by passing the Brexit law within days.

Johnson has suggested he would push for a new election, campaigning on a platform to “get Brexit done” if the EU agrees the full three-month delay that lawmakers forced him to request.

He cannot however call an election without the support of the opposition Labour Party, which has suggested it will support one only if the Brexit deadline is extended beyond election day.

Brexit and fractured political allegiances are causing a headache for pollsters. Opinion polls put Johnson’s Conservative Party either ahead of or level with Labour.