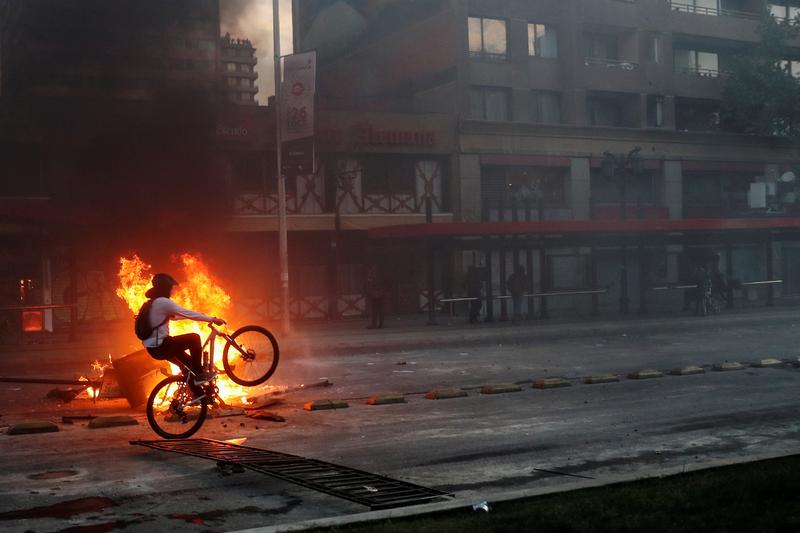 (Reuters) – Another day, another protest.

A demonstrator rides a bicycle past an improvised bonfire during a protest against the increase in subway ticket prices in Santiago, October 19. REUTERS/Ivan Alvarado

On Monday it was Bolivia – angry people clashed with police after the political opposition said it had been cheated in an election won by incumbent President Evo Morales.

Last week, the streets of the Chilean capital Santiago descended into chaos, as demonstrators enraged by a hike in public transport fares looted stores, set a bus alight and prompted the president to declare a state of emergency.

Earlier this month, Ecuador’s leader did the same after violent unrest triggered by the decision to end fuel subsidies that had been in place for decades.

And that was just South America.

Hong Kong has been in turmoil for months, Lebanon’s capital Beirut was at a standstill, parts of Barcelona resembled a battlefield last week and tens of thousands of Britons marched through London at the weekend over Brexit.

Protests have flared around the world in the last few months. Each has had its own trigger, but many of the tactics and underlying frustrations are similar. Governments, economists and ordinary people are taking notice.

In at least four countries hit by recent violent protests, the main reason for the uprising is economic.

Governments in Chile and Ecuador have incurred their people’s wrath after trying to raise fares and end fuel subsidies.

As clashes engulfed Quito, Ecuadorean President Lenin Moreno reached out to indigenous leaders who had mobilized people to take to the streets.

“We’re defending the people,” Vargas said in a live Facebook video from the march in Quito.

His response, visible to millions of people, underlines an added challenge authorities have when trying to quell dissent: social media has made communication between protesters easier than ever.

Tens of thousands of people have flooded Beirut in the biggest show of dissent against the establishment there in decades. People of all ages and religions joined to protest about worsening economic conditions and the perception that those in power were corrupt.

Similar factors were behind deadly civil unrest in Iraq in early October.

More than 100 people died in violent protests across a country where many Iraqis, especially young people, felt they had seen few economic benefits since Islamic State militants were defeated in 2017.

Security forces cracked down, with snipers opening fire from rooftops and the internet being shut to stem the flow of information among protesters.

“The bullets do not scare us. They do not scare Iraqis. This will all come down over their heads,” said one protester in Baghdad.

GIVE US OUR AUTONOMY

Hong Kong has been battered by five months of huge and often violent protests over fears Beijing is tightening its grip on the territory, the worst political crisis since colonial ruler Britain handed it back to China in 1997.

There have been few major rallies in recent weeks, but violence has escalated at those held, with militant activists setting metro stations ablaze and smashing up shops, often targeting Chinese banks and stores with mainland links.

Police have fired thousands of rounds of tear gas, hundreds of rubber bullets and three live rounds at brick- and petrol bomb-throwing activists.

Events in Hong Kong have drawn comparisons to demonstrations in Catalonia in recent days. There, too, people are angry at what they see as attempts to thwart their desire for greater autonomy from the rest of Spain, if not outright independence.

Protesters set cars on fire and threw petrol bombs at police in Barcelona, unrest sparked by the sentencing of Catalan separatist leaders who sought to declare an independent state.

Demonstrators also focused on strategic targets to cause maximum disruption, including the international airport, grounding more than 100 flights.

That came several days after similar action in Hong Kong, suggesting that protests movements are following and even copying each other on social media and the news.

“In Hong Kong they have done it well, but they are crazier,” said Giuseppe Vayreda, a 22-year-old art student at a recent Catalan separatist protest.

On Thursday, Hong Kong protesters plan a rally to show solidarity with those demonstrating in Spain.

LEADER OR NO LEADER

In some cases, individuals rise to the forefront of protest movements, using social media to get their message across.

In Egypt, where demonstrations last month were relatively small yet significant in their rarity, the catalyst of dissent against President Abdel Fattah al-Sisi was an Egyptian posting videos from Spain.

Greta Thunberg, a Swedish teenager, inspired millions of people to march through cities around the world in September to demand that political leaders act to stop climate change.

Tens of thousands gathered in a New York park to listen to her speech.

“If you belong to that small group of people who feel threatened by us, then we have some very bad news for you,” she said. “Because this is only the beginning. Change is coming whether they like it or not.”