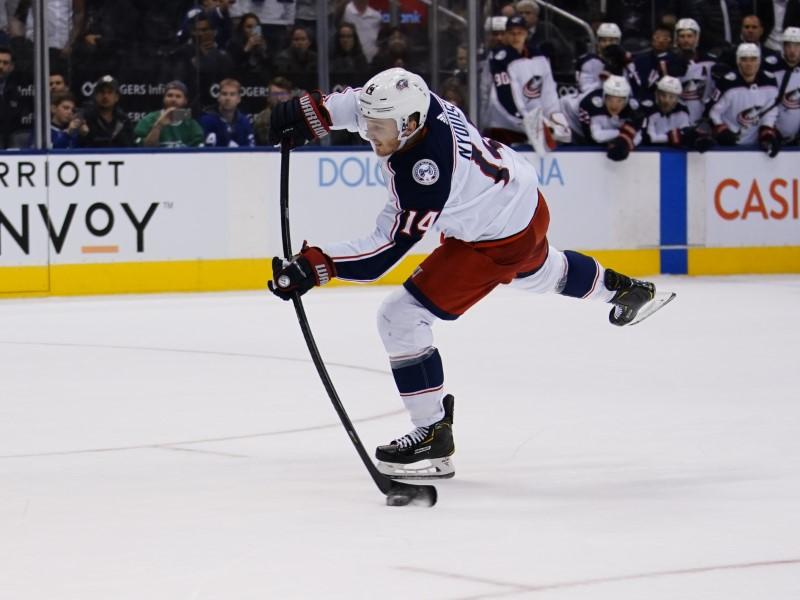 Gustav Nyquist scored on a penalty shot at 1:57 of overtime, and the visiting Columbus Blue Jackets defeated the Toronto Maple Leafs on Monday.

The penalty shot was awarded after Toronto’s Mitch Marner hooked Nyquist on a breakaway. Nyquist responded by scoring his second goal of the season.

Riley Nash, Pierre-Luc Dubois and Alexander Wennberg also scored for Columbus. Nick Foligno had two assists. It was the seventh straight game decided by one goal for the Blue Jackets, who improved to 2-2 in overtime this season. They lost in overtime Friday and Saturday.

Auston Matthews had a goal and an assist for the Maple Leafs while Kasperi Kapanen and William Nylander added a goal each. Jake Muzzin and Andreas Johnsson had two assists apiece.

Oskar Lindblom and Travis Konecny each scored one goal and added one assist, and Kevin Hayes and Matt Niskanen added a goal apiece for the Flyers, who scored the game’s first five goals.

Vladimir Tarasenko scored a goal and set up two others as host St. Louis handed Colorado its first regulation loss of the season.

The defeat could prove costly for the Avalanche. Top-line winger Mikko Rantanen exited the game with a left leg injury in the second period, and he needed help getting back to the Colorado dressing room.

Radek Faksa also scored for the Stars, who outshot Ottawa 43-20 to improve to 3-7-1 and win back-to-back games for the first time this season. They were 0-2-1 at home before finally breaking though one night after several players, including stars Tyler Seguin and Ben Bishop, sustained damage to their homes from a tornado that swept through the north Dallas area.

With Bishop not in the lineup, Khudobin, who had yielded 10 goals while losing his first three starts of 2019-20, needed to make only 19 saves. He improved to 8-0-1 in his career against Ottawa.