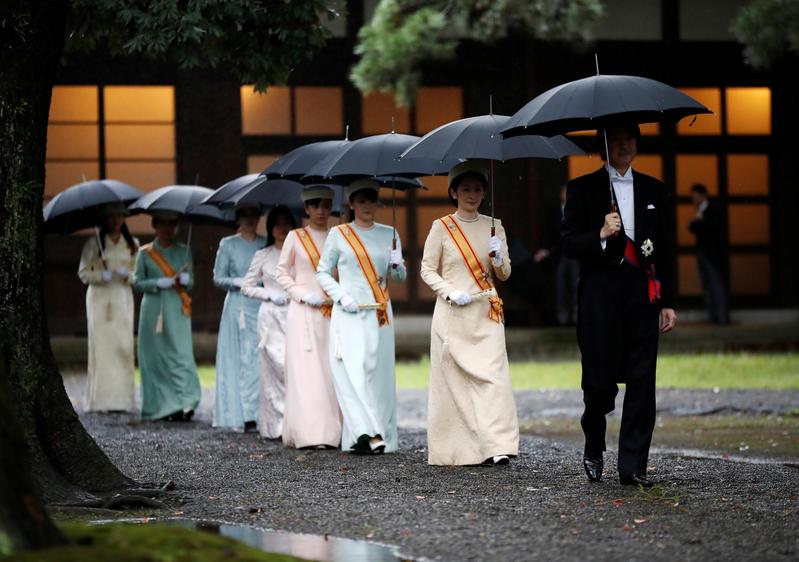 TOKYO (Reuters) – Japanese Emperor Naruhito began ceremonies to formally proclaim his enthronement on Tuesday in a centuries-old ritual attended by dignitaries from more than 180 countries.

Japan’s Prince Akishino and Princess Kiko arrive at the ceremony site where Emperor Naruhito will report the conduct of the enthronement ceremony at the Imperial Sanctuary inside the Imperial Palace in Tokyo, Japan October 22, 2019. REUTERS/Kim Hong-ji

Naruhito, 59, and his Harvard-educated wife Empress Masako, 55, took over in May in a brief, tradition-filled ceremony but Tuesday’s “Sokui no Rei” is a more elaborate ritual in which he officially announces his change in status to the world.

The celebratory mood for what has been proclaimed a national holiday has been tempered by Typhoon Hagibis, which tore through Japan 10 days ago. The typhoon killed at least 80 people and prompted the postponement of a planned celebratory parade.

Congratulatory banners were flying at some subway stations and street corners, but the public response was a far cry from the celebrations in May when Naruhito’s accession coincided with an unusual ten-day holiday period.

Small groups of people waited at the Imperial Palace gate on Tuesday in pouring rain, waving Japanese flags and cheering a smiling Naruhito as he entered by car.

The first Japanese emperor born after World War Two, Naruhito acceded to the throne when his father, Akihito, became the first Japanese monarch to abdicate in two centuries after worrying that advancing age might make it hard to perform official duties.

“As he is young and energetic with outstanding leadership, I hope he’ll support the people of Japan, which has faced continuous disasters and typhoons,” said Tomoko Shirakawa, 51, who was waiting in front of the palace.

Naruhito began the day’s ceremonies by reporting his enthronement to his imperial ancestors at one of three shrines on the palace grounds, dressed in a black headdress and pure white robes with a long train borne by an attendant.

He was followed later by Empress Masako, dressed in 12-layered white robes and attended by two women in violet robes to arrange her train.

For the main ceremony, Naruhito will wear a traditional burnt-orange robe and headdress, as his father did nearly three decades ago. It will start at 1:00 p.m. (0400 GMT) at the Imperial Palace’s Matsu no ma, or Hall of Pine, the most prestigious space in the palace.

He will declare his enthronement from the “Takamikura” – a 6.5 meter (21 feet) high pavilion that weighs about 8 tonnes – with an ancient sword and a jewel, two of the so-called Three Sacred Treasures, placed beside him.

Together with a mirror called Yata-no-Kagami, which is kept at the Ise Grand Shrine, the holiest site in Japan’s Shinto religion, the three treasures comprise the regalia that symbolizes the legitimacy of the emperor.

Masako will also take part in the ceremony, gaining her own throne while wearing 12-layered robes and an elaborate hairstyle.

Akihito pledged during his own ceremony in 1990 to observe Japan’s pacifist constitution and fulfill his duty as a symbol of the state and for the unity of the people. Naruhito promised to follow his father’s path and observers have noted he has so far made only small changes.

“It’ll be nice if the new emperor will be as kind hearted as the former emperor and stay close to the people,” said Ryoya Suzuki, 25, in front of the palace.

A court banquet will be held on Tuesday night, before Naruhito and Masako host a tea party for foreign royalty on Wednesday afternoon.

A celebratory parade has been postponed until Nov. 10 while the government devotes its attention to coping with the aftermath of the typhoon. Still, NHK national broadcaster said there were 26,000 police providing security on Tuesday.