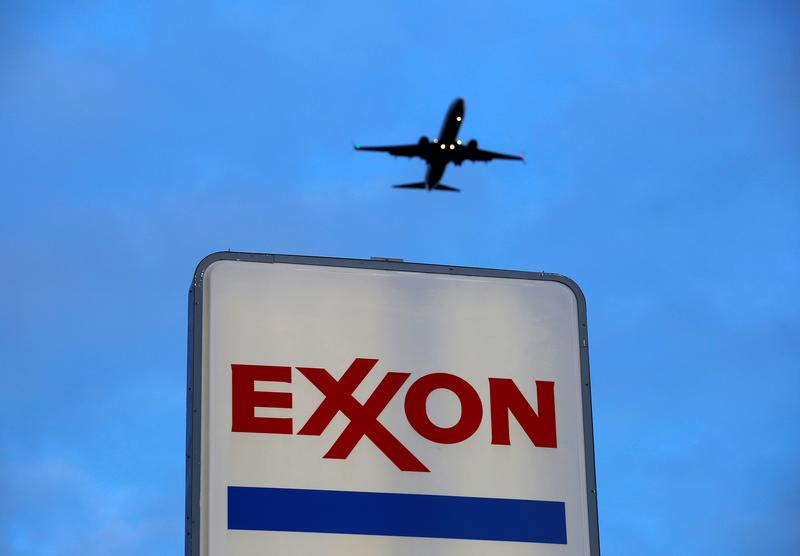 (Reuters) – A lawyer for New York’s attorney general on Tuesday told a state judge that Exxon Mobil Corp used two sets of books to hide the true cost of climate change regulations from investors, while an attorney for the oil major assailed the claims as politically motivated.

FILE PHOTO: An airplane comes in for a landing above an Exxon sign at a gas station in the Chicago suburb of Norridge, Illinois, U.S., October 27, 2016. REUTERS/Jim Young/File Photo

The lawyers’ opening statements kicked off a long-awaited trial in a civil lawsuit filed by the attorney general last year accusing Exxon of defrauding investors out of up to $1.6 billion.

The trial, expected to last up to three weeks, will take place before Justice Barry Ostrager in Manhattan Supreme Court without a jury and could feature testimony from Rex Tillerson, who served as Exxon chief executive officer and U.S. Secretary of State.

It is the first of several lawsuits currently pending against major oil companies related to climate change to go to trial.

The attorney general sued Exxon in October 2018 under the Martin Act, a New York state law that had been used primarily to go after financial fraud.

The lawsuit claimed Exxon falsely told investors it had properly evaluated the impact of future climate regulations on its business using a “proxy cost” of up to $80 per ton of carbon emissions, but internally used figures as low as $40 per ton or none at all.

“What we are saying, and the law demands, is that Exxon not mislead its investors,” he said.

Theodore Wells, a lawyer for Exxon, said that after Tillerson became chief executive in 2006, the company put in place a “robust system” to manage the risk of increasing climate change.

He said the $80 per ton proxy cost represented a “global,” “macro level” assessment of the cost, while lower figures, known as greenhouse gas or GHG costs, were used for particular capital projects.

“There is no document that says…proxy costs and GHG costs were one and the same,” he said.

“They didn’t stay in their lane of objectivity and fairness,” he said.

Massachusetts is separately investigating whether Exxon concealed its knowledge of the role fossil fuels play in climate change.

Both Massachusetts and New York began investigating Exxon after news reports in 2015 saying company scientists had determined that fossil fuel combustion must be reduced to mitigate the impact of climate change.

Those reports, by InsideClimate News and the Los Angeles Times, were based on documents from the 1970s and 1980s. Exxon said the documents were not inconsistent with its public positions.

Exxon and other oil companies including BP Plc, Chevron Corp and Royal Dutch Shell face lawsuits by cities and counties across the United States seeking funds to pay for seawalls and other infrastructure to guard against rising sea levels brought on by climate change.