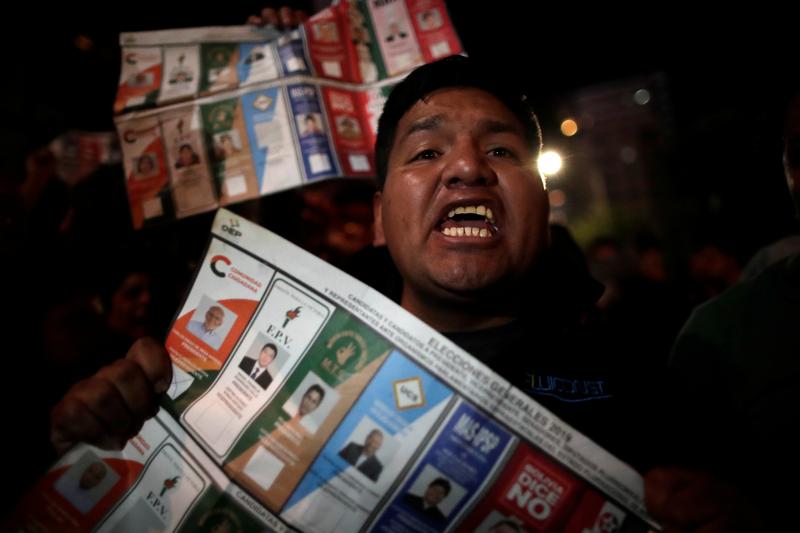 LA PAZ (Reuters) – Protesters in Bolivia were set to take to the streets for a second day on Tuesday after a preliminary vote count showed President Evo Morales had eked out an outright win, sparking demonstrations that devolved into late-night rioting as the opposition accused him of stealing the vote.

Bolivians, furious over the results amid allegations of vote-rigging, set fire to electoral offices in three cities in the provinces late on Monday, including one in the city of Potosi, where two people jumped from a burning building to escape the flames.

To avoid a runoff election, Morales needed 40% of the vote and a 10-point lead over the runner-up.

Videos broadcast on social media and local TV also showed protesters pulling down a statue of late Venezuelan President Hugo Chavez in the city of Riberalta, and pitched battles between police and masked youths amid plumes of tear gas.

As fears of a prolonged turmoil spread, long lines formed at some gas stations and supermarkets, prompting local food and energy associations to put out statements stressing that there was no shortage of supplies.

The unrest marks a major jolt for the land-locked country, which has had a long stretch of political stability under Morales, Bolivia’s first indigenous president and South America’s longest continuous-serving standing leader.

Morales, in office since 2006, has not made any public appearances since declaring victory late on Sunday even as three preliminary vote counts – including one by the state Supreme Electoral Tribunal (TSE) – showed he would likely be forced into a head-to-head second round with runner-up Carlos Mesa.

Morales said he was confident votes from rural areas would deliver him an outright win.

The TSE on Monday evening confirmed Morales’ prediction, showing him with a 10-point lead over Mesa when it restarted the faster preliminary vote count after a nearly 24-hour pause had sparked concern from monitors and foreign governments.

Mesa soon said he would not recognize the result, while the official monitor, the Organization of American States, said the sharp change in outcome since Sunday was “inexplicable” and a blow to voters’ trust in the electoral process.

A binding vote-count is still underway and could take days to finish.

As uncertainty loomed early on Tuesday, leftist Morales took to Twitter to remind Bolivians of high rates of poverty under a right-wing government in the 1990s.

A political group affiliated with Morales, Conalcam, slammed the unrest as part of a coup d’etat orchestrated by the right-wing opposition and called on supporters to defend Morales’ “victory” with peaceful counter-protests.

Morales’ interior minister, Carlos Romero, warned Mesa and his supporters not to stoke violence. “If someone goes too far and doesn’t measure the consequences, that’s their responsibility,” Romero said late on Monday.

(The story corrects title of interior minister in last paragraph)