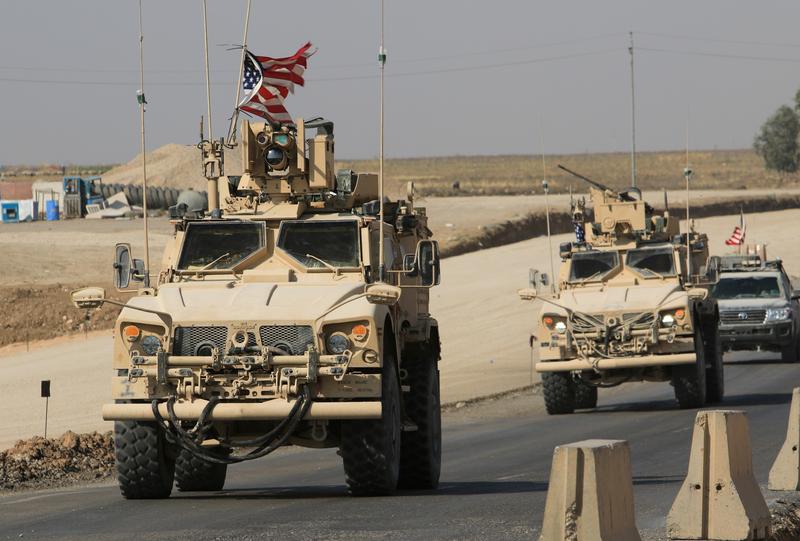 DOHUK, Iraq (Reuters) – U.S. troops crossed into Iraq early on Monday, part of a withdrawal from northeast Syria ordered by President Donald Trump that opened the way for Turkish troops to launch an offensive against Kurdish fighters in the area.

A convoy of U.S. vehicles is seen after withdrawing from northern Syria, at the Iraqi-Syrian border crossing in the outskirts of Dohuk,, Iraq, October 21, 2019. REUTERS/Ari Jalal

A Reuters cameraman saw more than 100 vehicles crossing from the northeast tip of Syria, where Turkey has agreed to pause its offensive for five days under a deal agreed between Washington and Ankara. The truce expires late on Tuesday.

U.S. Defence Secretary Mark Esper said on Saturday that all of the nearly 1,000 troops withdrawing from northern Syria are expected to move to western Iraq to continue the campaign against Islamic State militants and “to help defend Iraq”.

Turkish President Tayyip Erdogan has warned that Ankara will resume its military assault in Syria when the deadline expires if the Kurdish-led Syrian Democratic Forces (SDF) have not pulled back from its proposed “safe zone” area spanning the border.

Erdogan has also said Turkey will set up a dozen observation posts in the planned “safe zone”. A witness in the region said Turkish forces had already begun establishing two such posts on Sunday, drawing criticism from Iran on Monday.

“The issues should be resolved by diplomatic means … Syria’s integrity should be respected,” said Mousavi, whose country is a staunch ally of Syrian President Bashar al-Assad.

Turkey launched its offensive after Trump announced he was withdrawing U.S. troops from northeastern Syria. Trump’s move was criticized in Washington and elsewhere as a betrayal of Kurdish allies who had fought for years alongside U.S. troops against Islamic State.

However, Trump is now leaning in favor of a new military plan to keep about 200 U.S. troops in eastern Syria near the Iraq border, the New York Times said late on Sunday. The White House did not immediately respond to a request for comment.

Ankara is seeking to set up the “safe zone” as a buffer as it regards the YPG militia, the main component of the SDF, a terrorist group because of its links to Kurdish insurgents in southeast Turkey. The YPG has been a close U.S. ally in the fight against Islamic State.

On Sunday, the SDF said they had withdrawn from the border town of Ras al Ain under the U.S.-brokered ceasefire deal, but a spokesman for Turkish-backed Syrian rebels said the withdrawal was not yet complete.

U.S. troops have crossed into the semi-autonomous Kurdistan Region of Iraq, an Iraqi Kurdish security source told Reuters on Monday.

About 30 trailers and Hummers carrying heavier duty equipment crossed, with troops in cars coming through, the source added. A second security source in Mosul also said U.S. troops had crossed into Iraq from Sahela.

The U.S. pullout has also created a vacuum that Russia, Assad’s most powerful backer, has looked to fill. Syrian and Russian forces, invited by Kurdish authorities, last week entered the two border cities of Manbij and Kobani vacated by U.S. troops.

Erdogan has backed rebels fighting to oust Assad in the eight-year Syrian conflict, but has said Turkey had no problem with Syrian government forces deploying near the border if the YPG militia were removed.

At a planned meeting on Tuesday in the Russian city of Sochi, Erdogan and Russian President Vladimir Putin will discuss the issue of YPG withdrawal from Manbij and Kobani, Turkish Foreign Minister Mevlut Cavusoglu said on Sunday.

While Erdogan and Putin have close ties on defence and energy, Moscow has called the Turkish offensive into Syria “unacceptable” and said it should be limited.

Additional reporting by Parisa Hafezi in Dubai and Can Sezer in Istanbul; Writing by Jonathan Spicer; Editing by Gareth Jones