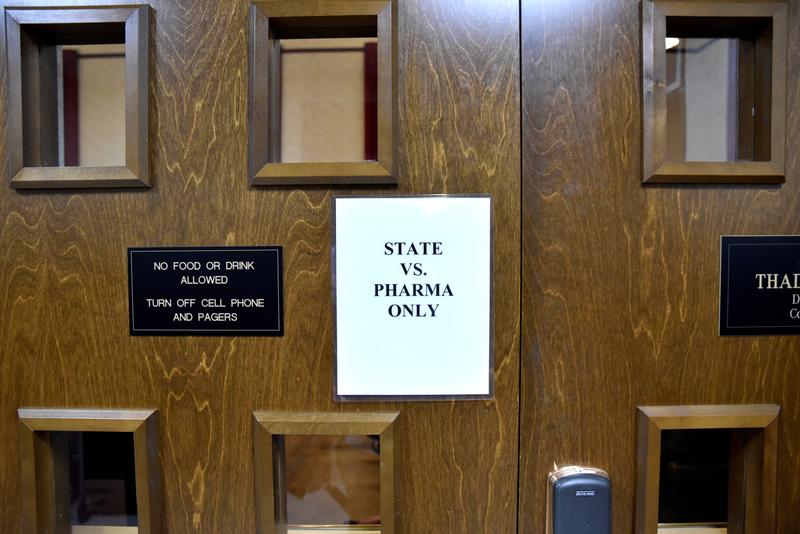 CLEVELAND (Reuters) – The fight over who is responsible for the opioid epidemic that has ravaged the United States heads to court on Monday in Ohio as local governments seek billions of dollars from companies that manufactured and distributed the highly-addictive painkillers.

A sign is seen on the outside of the courtroom on the first day of a trial of Johnson & Johnson over claims they engaged in deceptive marketing that contributed to the national opioid epidemic in Norman, Oklahoma, U.S. May 28, 2019. REUTERS/Nick Oxford

The trial will pit two Ohio counties against five companies the local governments say helped fuel a nationwide crisis. Some 400,000 U.S. overdose deaths between 1997 and 2017 were linked to opioids, according to government data.

Ohio’s Cuyahoga and Summit counties are seeking around $8 billion to pay for addiction treatment programs and to cover expenses spent over the years on police and healthcare.

The outcome of the first federal lawsuit to go to trial over the epidemic could influence how much they and other companies, such as Johnson & Johnson, pay to reach what is known as a global settlement of all opioid litigation.

The bellwether, or test trial, kicks off after last-ditch efforts to strike a broader $48 billion settlement fell short on Friday.

Some 2,600 lawsuits have been brought by states, towns, cities, counties and tribal governments who say drugmakers overstated the benefits of opioids while downplaying the risks and distributors failed to flag and halt a rising tide of suspicious orders, shipping vast amounts of the pills across the country.

Drugmakers have denied wrongdoing, arguing their products carried U.S. Food and Drug Administration-approved labels that warned of the addictive risks of opioids. They say they did not cause the terrible toll the epidemic has had on states and localities.

AmerisourceBergen, Cardinal Health and McKesson said in a joint statement on Saturday that they made up only “one component of the pharmaceutical supply chain” and their role was to make sure medicines prescribed by licensed doctors were available for patients.

“We remain deeply concerned by the impact the opioid epidemic is having on families and communities across our nation – and we’re committed to being part of the solution,” the statement said.

Together, the three companies distribute around 90% of the country’s drugs.

Walgreens and Teva did not return a request for comment.

The two Ohio counties have obtained more than $60 million in prior settlements with drugmakers J&J, Endo International Plc, Mallinckrodt Plc and Allergan Plc.

Claims against smaller distributor Henry Schein Inc by Summit County were dismissed over the weekend. Cuyahoga had not sued that company.

On Friday, U.S. Judge Dan Polster in Cleveland summoned executives from the big three distributors and Teva to court to hammer out a global deal that would have averted the trial. Polster also invited states, which have sued but do not have cases before him, to participate in settlement talks.

After nearly 11 hours, during which Polster shuttled between plaintiffs and defendants, the talks ended without a deal.

The breakdown marked a setback for Polster, who has aggressively pushed for a settlement that “could do something meaningful to abate this crisis.”

Pharmacy chains and drug distributors unsuccessfully tried to remove the outspoken judge from the case, saying he was biased and had pressed too hard for a costly settlement.

Attorney Paul Hanly told reporters on Friday that local governments he represents were “not on the same page” as the state attorneys general involved in the talks.

Pennsylvania Attorney General Josh Shapiro said it was “profoundly disappointing” that local governments would not go along with a settlement he valued at $48 billion, including $22 billion in cash and $26 billion in products and services.

Hanly and two other lawyers for the local governments, Joe Rice and Paul Farrell, said in a statement late on Friday that they remained open to settlement discussions but expected the trial to go forward as planned.

“When the first day of trial starts Monday, we look forward to sharing the facts – and the facts will show that opioid makers and distributors conspired to create and benefit from the worst public health disaster in decades,” they said.

Reporting by Tom Hals in Wilmington, Delaware, Nate Raymond in Boston and Kathy Gray in Cleveland.; Editing by Noeleen Walder and Bill Berkrot