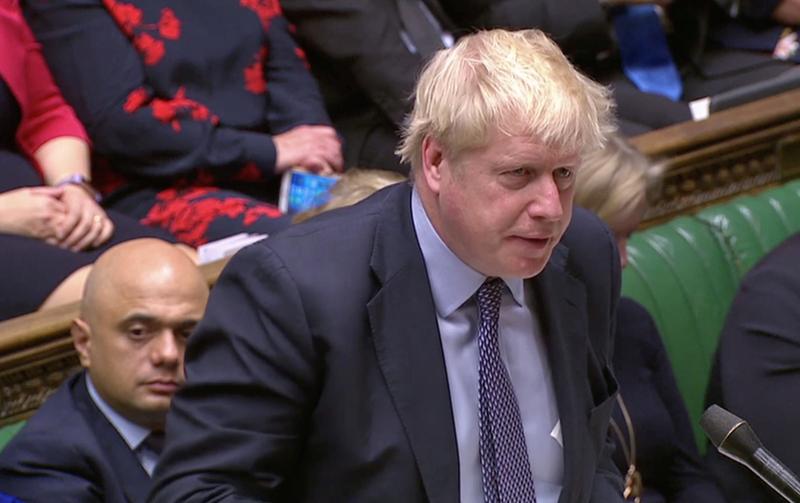 LONDON(Reuters) – Prime Minister Boris Johnson appealed to lawmakers on Monday to approve his Brexit bill this week, saying neither he, the European Union or the public wanted any more delays to Britain’s departure from the bloc.

FILE PHOTO: Britain’s Prime Minister Boris Johnson speaks at the House of Commons as parliament discusses Brexit, sitting on a Saturday for the first time since the 1982 Falklands War, in London, Britain, October 19, 2019, in this screen grab taken from video. Parliament TV via REUTERS

With just over a week before Britain is due to leave the EU, Johnson is scrambling to get his deal through parliament, which has put up a series of hurdles for the prime minister to meet his Oct. 31 deadline to try to prevent a no-deal Brexit.

After the parliamentary speaker ruled out a straight ‘yes or no’ vote on the deal itself on Monday, Johnson is now looking to pass the legislation implementing the agreement through parliament as quickly as possible.

More than three years after Britain voted to leave the EU in a 2016 referendum, the future of Brexit is as uncertain as ever, with a divided country, and parliament, still debating when, how and even whether it should happen.

In a final appeal to lawmakers before a vote on the first stages of his Withdrawal Agreement Bill, Johnson said he had secured a new deal so Britain could move on and discuss issues such as its health service, education and the cost of living.

“I hope parliament today votes to take back control for itself,” Johnson said in a statement before Tuesday’s votes.

“The public doesn’t want any more delays, neither do other European leaders and neither do I. Let’s get Brexit done on 31 October and move on.”

Johnson, who has failed to win most votes in parliament, has a rocky road ahead.

Parliament has already forced him to ask the EU for an extension to the negotiations – something he previously said he would rather be “dead in a ditch” than ask for. Instead he sent Brussels an additional letter saying he did not want a delay.

That has made some lawmakers increasingly concerned about his motivations, with some wanting further protections in law to make sure that Johnson cannot take Britain out of the EU without a deal, which most businesses say would damage the economy.

His parliamentary battle starts on Tuesday, when lawmakers will debate and vote on the Withdrawal Agreement Bill, the detailed legislation that puts his Brexit deal into British domestic law.

The government has proposed that lawmakers vote on a so-called second reading on the bill before setting out an accelerated timetable for its passage through both the lower house and upper houses of parliament in time for his deadline.

Opposition lawmakers have accused Johnson of trying to “ram” the bill through parliament without giving the chamber enough time to study its 110 pages.

Lawmakers could vote to reject the timetable, which would threaten the Oct. 31 deadline.

Some lawmakers may also look at ways later in the process to introduce changes to the legislation that could fundamentally alter the nature of Johnson’s deal – including possibly adding the need for a second referendum on the agreement.

But Johnson’s team is convinced the prime minister has the numbers to force it through eventually.

“We have negotiated a new deal so that we can leave without disruption and provide a framework for a new relationship based on free trade and friendly cooperation,” Johnson said in Monday’s statement. “We are leaving the European Union but we will always be European.”