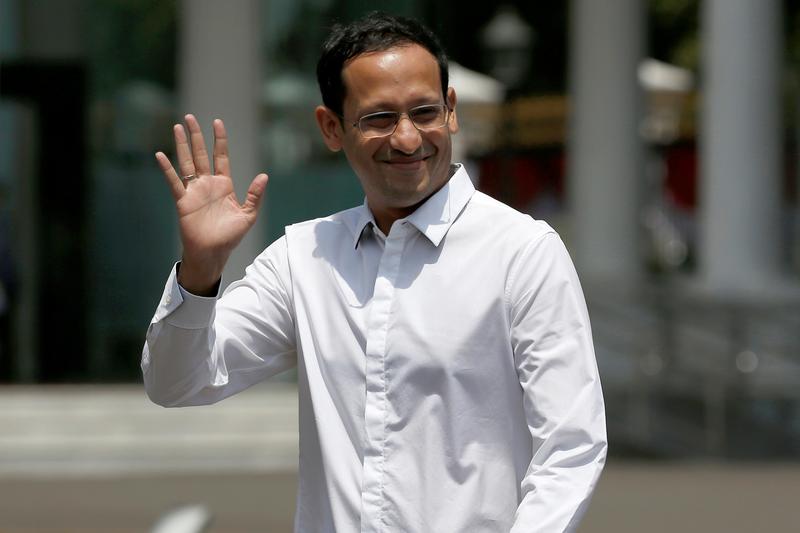 JAKARTA (Reuters) – Gojek CEO and co-founder Nadiem Makarim said on Monday he had resigned to join Indonesia’s cabinet, and the ride-hailing and payments company said two senior officials would jointly take over running operations of the $10 billion firm.

Nadiem Makarim, founder of the Indonesian ride-hailing and online payment firm Gojek waves to journalists as he arrives at the Presidential Palace in Jakarta, Indonesia, October 21, 2019. REUTERS/Willy Kurniawan

President Andre Soelistyo and the other co-founder Kevin Aluwi would be the joint CEOs, Gojek said. It said in a statement it had “planned for this possibility and there would no disruption to its business.”

Makarim, 35, told reporters at the presidential palace in Jakarta it was a “a big honor to be able to join the cabinet.” He said his specific role would be announced by President Joko Widodo later in the week.

Makarim said he and Widodo had spoken about “directions to develop Indonesia in the future” including in “human capital, bureaucratic reform, and investment.”

Indonesia media have linked Makarim, the face of Gojek, to a possible cabinet post in a new digital economy ministry or in education.

The move comes as Gojek ramps up expansion efforts through the region. Gojek group president Soelistyo has been at the firm since 2016 and previously headed Singaporean private equity firm Northstar Group, while co-founder Aluwi currently runs the company’s data science and analytics teams.

Having evolved from a ride-hailing service founded in 2010 to a one-stop app via which users can make online payments and order food and services such as massages, Gojek is now targeting a larger slice of the Southeast Asian market, where Singapore-based rival Grab currently dominates ride-sharing.

The Indonesian company, valued at $10 billion, raised over $1 billion earlier this year from backers including Alphabet’s Google and Chinese tech giants Tencent and JD.

Gojek is one of Indonesia’s five unicorns – companies that have reached $1 billion in valuation without tapping the stock markets.

The others are travel site Traveloka, market places Bukalapak and Tokopedia, and Grab-backed fintech firm OVO, which competes with Gojek’s own payments platform Gopay for the top spot in Indonesia’s multi-billion dollar online payments market.

However, while the country is one of the world’s fastest largest growing internet economies, its technology firms face an acute skills shortage that Widodo has pledged to bridge.