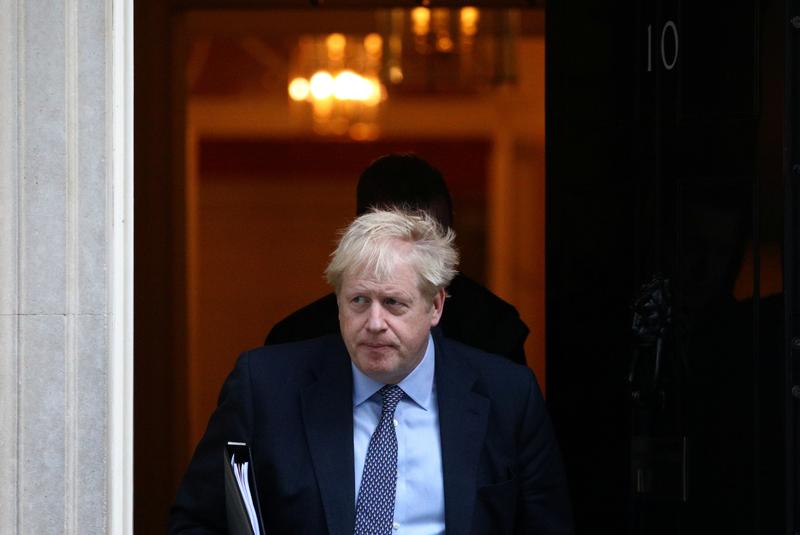 LONDON (Reuters) – Prime Minister Boris Johnson will try again to get his Brexit deal passed by parliament on Monday after lawmakers decided to delay their agreement, a humiliating blow for a leader who has staked his reputation on leaving on Oct. 31.

Britain’s Prime Minister Boris Johnson leaves Downing Street to head for the House of Commons as parliament discusses Brexit, sitting on a Saturday for the first time since the 1982 Falklands War, in London, Britain, October 19, 2019. REUTERS/Tom Nicholson

On Saturday, Johnson was forced to send a letter to the European Union seeking an extension to his “do or die” deadline of the end of October, but the British leader also sent another one to argue against what he called a “deeply corrosive” delay.

After more than three years of negotiations, it is unclear as to how, whether or when a deeply divided Britain will leave the bloc, more than 40 years after the country joined the project built out of the ruins left by World War Two.

Following is a rough guide to what could happen next:

Jacob Rees-Mogg, leader of the lower house of parliament, or House of Commons, said on Saturday the government planned to put Johnson’s exit deal to a debate and vote on Monday.

But the speaker of the House, John Bercow, said he would rule whether that would be allowed after several lawmakers said it would break with parliamentary convention that the same question cannot be put twice during the same session.

His statement should come at around 1430 GMT.

“I have been blindsided on this matter, as others have been,” Bercow told parliament after Rees-Mogg’s announcement.

“I will reflect on the matter, absorbing what colleagues say and consulting others for their advice, and I will report to the House on Monday,” he added. “The government are not the arbiter of what is orderly.”

If there is a vote, it could come much later in the day.

Scotland’s highest court, the Court of Session, is due to consider on Monday a legal challenge that sought to force Johnson to comply with the so-called Benn Act. That was the law which required him to write the extension letter if parliament had not approved either a deal or a no-deal exit by Oct. 19.

Anti-Brexit campaigners had asked the court earlier this month for it either to issue an order forcing Johnson to ask for a delay or for it to instruct that a letter be sent to the EU on his behalf if he refused.

The campaigners also said he should face penalties including a fine or even prison if he did not comply with the Benn Act.

Opposition lawmakers said by writing two letters, Johnson had broken his government’s pledge to the court not to frustrate the legislation.

But on Sunday, anti-Brexit campaigners said they would ask the court to delay its ruling on the challenge.

“What I and … the other petitioners have instructed our lawyers to do is to seek a continuation of the case until the end of the week to keep a watching brief over matters,” Scottish National Party lawmaker Joanna Cherry told ITV.

The court, has not yet ruled on the matter and was waiting to do so pending developments up to Oct. 19. But it said this month that government lawyers had given formal legal statements – averments – that he would abide by the Benn Act and it would be a serious matter if he did not.

Johnson told parliament that “next week the government will introduce the legislation needed for us to leave the EU with our new deal on October 31”. It is widely expected to have its first main stage of debate on Tuesday.

Senior minister Michael Gove said on Sunday the government would seek to get the legislation required through parliament in order to get Brexit done and leave the EU on Oct. 31. Gove and foreign minister Dominic Raab said they believed the government had the numbers to pass a deal.

Former minister Amber Rudd, who quit the government over Johnson’s willingness to pursue a no-deal Brexit, said she and most of the 21 Conservative lawmakers who were kicked out of the parliamentary party for backing attempts to block a no-deal exit, would support the legislation.

“He has a fragile but sincere coalition of people who want to support it,” she told Sky News.

Lawmakers will have the opportunity to bring changes to the legislation and Labour Brexit policy chief Keir Starmer and finance spokesman John McDonnell said on Sunday the party would put forward amendments including on issues such as protecting worker’s rights and closing the “trap door” to a no-deal Brexit at the end of a transition period in December 2020.

Changes proposed by lawmakers are also likely to include adding a customs union with the EU to the deal and the need for a confirmatory referendum on the agreement.

Johnson has ruled out a customs union and, on Monday, a lawmaker from the Northern Irish Democratic Unionist Party, which has propped up the government, said it would not support such a proposal.

A confirmatory referendum would throw open the possibility of Brexit not even happening – although it is not clear whether there would be sufficient numbers among lawmakers to back such a plan.

The chairman of European Union leaders, Donald Tusk, said on Saturday he had received the extension request and he would now be consulting with EU capitals on how to react.

After a short meeting on Sunday, diplomats with the bloc said the EU would play for time rather than rush to decide on the delay request.

“We’re looking for more clarity towards the end of the week, hoping that by that time we will also see how things develop in London,” one senior EU diplomat said.

Leaders of the 27 states that will make up the EU once Britain leaves are unlikely to deny the extension request.

Gove said the EU was “waiting to see what parliament does now”.

“We’ll have an opportunity in the days ahead to consider the legislation that allows us to leave the European Union. If people vote for that legislation … then we can leave and we can leave in time,” he said.

Both the governing Conservatives and main opposition Labour Party say they want a new election, but Labour leader Jeremy Corbyn has said he will not back any move to hold one until a no-deal Brexit is ruled out.

“An election is inevitable because of the numbers in parliament, because we have got to break the impasse, the timing will be a matter for Jeremy Corbyn … but it is inevitable that sooner or later this breaks into a general election,” said Starmer.