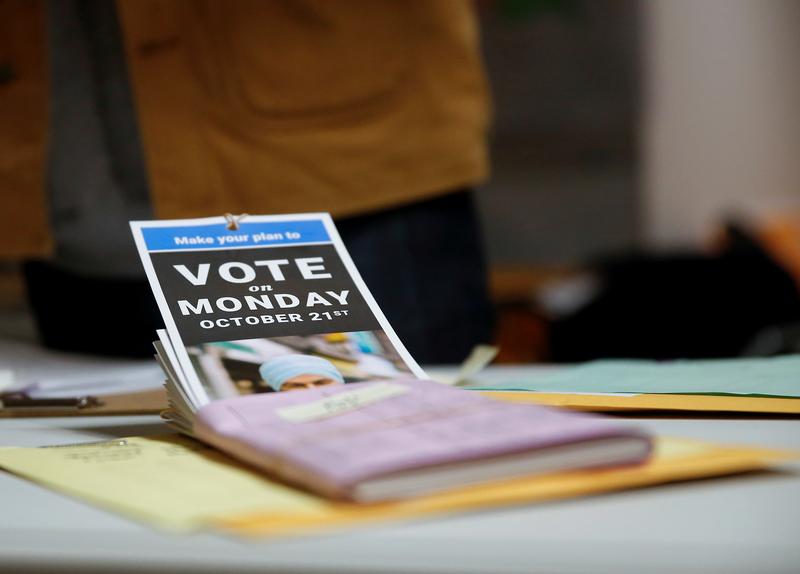 OTTAWA/CALGARY (Reuters) – Canadians began voting on Monday to determine whether Prime Minister Justin Trudeau, who swept into office four years ago as a charismatic figure promising “sunny ways,” will remain in power after two major scandals.

The first polls were set to close within hours in the province of Newfoundland and Labrador, with voting ending in the Pacific Coast province of British Columbia at 7 p.m. (0200 GMT on Tuesday)

Trudeau, 47, the Liberal Party leader, was endorsed by former Democratic U.S. President Barack Obama in the final stretch of the campaign and is viewed as one of the last remaining progressive leaders among the world’s major democracies.

But he was shaken during the campaign by a blackface scandal and has been dogged by criticism of his handling of a corruption case involving a major Canadian construction company. Trudeau, the son of former Prime Minister Pierre Trudeau, has also had to overcome a sense of fatigue with his government.

Trudeau, accompanied by his family, voted in Montreal on Monday after a marathon sprint campaigning across the country in the past four days.

On Twitter, he repeatedly urged people to get out and vote. Voter turnout is crucial for the Liberals who privately fear low engagement will affect them more than the Conservatives.

His Liberals and the main opposition Conservatives led by Andrew Scheer are in a neck-and-neck race, according to opinion polls.

A year ago, no one would have predicted that Trudeau risked becoming the first prime minister since the 1930s to secure a parliamentary majority and then fail to win a second term.

The latest opinion polls suggest he may narrowly avert that result and could win a minority in the 338-seat House of Commons. That would still leave Trudeau in a weakened position and needing the support of left-leaning opposition parties to push through key pieces of legislation.

“(A minority government) would force people to talk to each other which is what we need,” said Naomi Higgins, 25, after voting in Toronto. “We need to … start doing what’s best for everyone instead of what makes one party or the other look best.”

Despite Scheer’s dimpled smile, Trudeau’s main rival has proven to be a determined opponent.

“He can’t even remember how many times he put blackface on, because the fact of the matter is he’s always wearing a mask,” Scheer said during a debate. “Mr. Trudeau, you are a phony and you are a fraud and you do not deserve to govern this country.”

In his bid to unseat Trudeau, Scheer is also promising to balance the federal budget and eliminate a “carbon tax” on fossil fuels. Scheer, 40, is running his first campaign as party leader after winning a bitter Conservative leadership fight in 2017.

The six-week official campaign period has been a rough and meandering ride with dirty tactics on both sides.

The liberal image of Trudeau, who has championed diversity as prime minister and whose father opened up the country to mass immigration, took a severe blow when pictures emerged early in the campaign of him wearing blackface in the early 1990s and in 2001.

Trudeau had already been wrestling with the fallout from accusations he pressured his justice minister to help shield engineering firm SNC-Lavalin Group Inc from corruption charges. In August, a top watchdog said Trudeau breached ethics rules.

Given the fact that neither of the front-runners could come away with a parliamentary majority, it is the smaller left-leaning New Democratic Party (NDP) or the separatist Bloc Quebecois that could end up holding the balance of power.

“I am a lifelong Liberal voter and I am stumped on this one, mostly because I am really concerned about a Conservative win and just trying to figure out how to vote strategically,” said Kristin Street, 33, a strategy manager at a computer games company, in Port Moody, British Columbia.

EKOS Research pollster Frank Graves said Liberals needed turnout to be similar to four years ago or otherwise the Conservatives may have an edge.

“We may well be waiting until the final vote tallies in British Columbia to see who will win on Monday,” Graves said.

Reporting by Steve Scherer in Ottawa and Jeff Lewis in Calgary; Additional reporting by David Ljunggren in Ottawa, Allison Martell and Moira Warburton in Toronto; Editing by Amran Abocar and Matthew Lewis