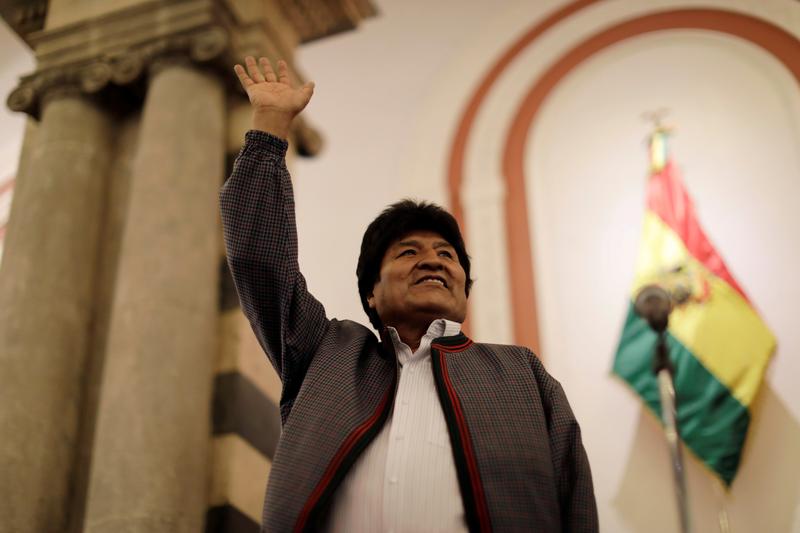 LA PAZ (Reuters) – Bolivia’s presidential election result was on a knife-edge on Monday, with a preliminary count suggesting it should go to a second-round run-off, but President Evo Morales insisting that he would secure enough votes in Sunday’s first round for an outright win.

Bolivia’s President and presidential candidate Evo Morales of the Movement Toward Socialism (MAS) reacts after the results for the first round of the country’s presidential election were announced, in La Paz, Bolivia October 20, 2019. REUTERS/Ueslei Marcelino

The uncertainty sparked fears among observers and diplomats about potential manipulation of the vote to avoid a risky second round, and of unrest that could follow in the landlocked nation, even as nearby Chile and Ecuador grapple with violence on the streets.

“The region is convulsing. In Bolivia so far there have been tensions but we could go from tension to convulsion if Morales tries to force a victory in the first round,” said Bolivian political analyst Franklin Pareja.

Morales was seen leading with 45% of the votes against 38% for main rival Carlos Mesa, according to a preliminary count of ballots by Bolivia’s electoral board, the Supreme Electoral Tribunal (TSE). Other pollsters also showed a tight race that would lead to a runoff vote.

Adding to the confusion, the official Cambio newspaper on Monday ran a front-page headline saying Morales had won, securing his fourth successive term.

Late on Sunday, however, the TSE had halted the provisionary count with just 83.76% of the ballot done. That move prompted the official monitor, the Organization of American States (OAS), to demand to know why.

“It’s crucial that this process is carried out quickly and transparently,” the OAS said on Monday, as fears of unrest grew and Mesa said he was heading to the industrial city of Santa Cruz to support groups mobilizing to demand the second round of voting.

Brazil, Argentina and the White House also expressed concern over the interruption of the official reporting of results.

“Electoral authorities should immediately restore credibility & transparency to the process so that the will of the Bolivian people is respected,” Michael Kozak, the U.S. assistant secretary of state for Western Hemisphere Affairs, said on Twitter.

CREDIBILITY OF THE VOTE

On Monday, Mesa railed against the government, saying that they were trying to “eliminate the clearly established path” to a second-round vote. He called on the international community and the monitors to ensure the vote remained fair.

“This manipulation they are trying to do is to completely block a second round and we will denounce it,” he told reporters and angry supporters gathered at the hotel in La Paz where the electoral board is conducting the count.

Morales needs over 50% or 40% with a 10-point lead over his closest rival to avoid a risky Dec. 15 second-round runoff. If he wins, Latin America’s longest continuous-serving standing leader would extend his rule to 19 years.

Antonio Costas, one of six members of the TSE team coordinating the count, told Reuters on Monday that the decision had been made to suspend the preliminary count to focus on the slower official calculation.

Costas added that he had not come under any political pressure to halt the preliminary count, but said that given the fierce criticism the TSE may have to reconsider.

“I think we need to reflect and if there is more data that we can publish we must do it,” he said. The rapid count was meant to help ensure greater transparency of the vote.

“We are going to talk respectfully. In my opinion this is a very good tool. It would not be desirable for the credibility (of the vote) to be affected.”

Morales, a former union leader for coca growers, has overseen a long stretch of political and economic stability for Bolivia, the continent’s poorest country. His support has slipped amid slowing economic growth and concerns about government corruption and anti-democratic practices.

Political analyst Pareja said Morales would need almost all the outstanding votes to reach a majority, which though not impossible was highly unlikely. “(So) even if he does win, no one is going to believe him,” he said.