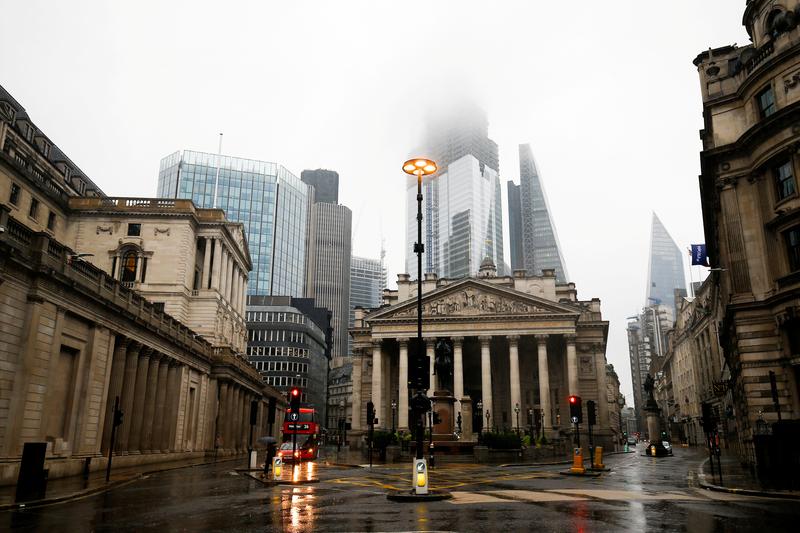 LONDON, (Reuters) – The Bank of England should be given more power to steer lending in Britain’s economy and influence government spending during a downturn, a think tank said on Monday.

FILE PHOTO: The Bank of England is seen in the financial district during rainy weather in London, Britain, September 23, 2018.

After more than a decade of low interest rates since the global financial crisis, central bankers across advanced economies are concerned that they’re less able to boost the economy when the next recession comes.

Positive Money, a think tank whose work has been endorsed by the opposition Labour Party and others in recent years, said closer coordination was needed between the BoE and the government, with the efficacy of quantitative-easing in doubt.

Last week, Gertjan Vlieghe, a member of the bank’s Monetary Policy Committee, cast doubt on the effectiveness of government bond purchases in future, and suggested the BoE could buy private-sector assets that were under stress.

Positive Money said the BoE and government should create a new credit policy unit so the BoE can influence lending, and the central bank should also be able to outline its expectations for the government’s fiscal policy.

Currently, the BoE avoids commenting on fiscal policy, and it has only bought nominal quantities of corporate debt, to avoid steering lending towards particular businesses or sectors.

The BoE is currently accountable to parliament through the Treasury Committee of politicians. Citizens should also be able to have direct input, the report said, and there should also be periodic debates in parliament over the BoE’s mandate.

“In the decade since the crash, the Bank of England has been handed powerful new tools such as quantitative easing and a new remit on financial stability,” said Fran Boait, executive director at Positive Finance.

“But this hasn’t been matched with an increase in accountability and democratic oversight, which has led to a widening gulf between the Bank and the public it is supposed to serve.”

Last year, a report commissioned by the Labour Party suggested the BoE could target productivity to help boost the economy if it wins power, although some economists said that was a task better suited to the government.

The Positive Money report also said recruitment criteria for the BoE’s Monetary Policy Committee should be broadened to include applicants from outside the world of finance and academia, such as trade unions or civic organisations.