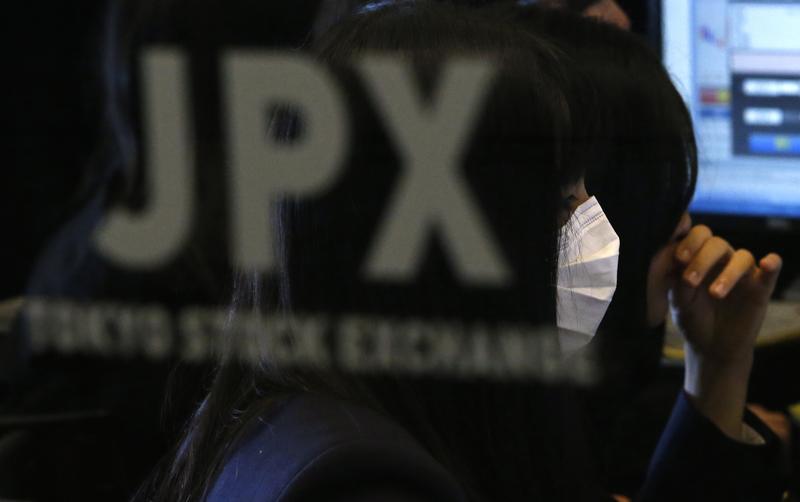 FILE PHOTO: A visitor wearing a mask is seen behind a logo of Japan Stock Exchange (JPX) at the Tokyo Stock Exchange in Tokyo December 15, 2014. REUTERS/Yuya Shino/File Photo

The pound slipped from a five-month high against the dollar and the euro after the British parliament forced Prime Minister Boris Johnson to seek a delay to an Oct. 31 deadline for Britain’s departure from the bloc.

The vote for an extension dealt a blow to optimism that a deal agreed last week would ensure Brexit happens with little economic disruption.

Chinese vice premier Liu He said on Friday that China will work with the United States to address each other’s concerns, and that stopping the trade war would be good for both sides and the world.

“We’ve had some positive news from Liu, and allowing Chinese investors direct access to dual-listed Hong Kong shares is a another positive,” said Sean Darby, global equity strategist at Jefferies in Hong Kong.

“There is still a lot of money on the sidelines, and there are only eight or nine weeks left to put that money to work before we end the year. I expect markets to remain bid.”

U.S. stock futures ESc1 rose 0.27% in Asia as investors brace for high-profile earnings this week from Microsoft Corp (MSFT.O), Amazon.com (AMZN.O) and others.

The S&P 500 fell 0.4% on Friday partly due to worries about fallout from the U.S.-China trade war.

A 15-month long trade war between the United States and China has shown few signs of a durable resolution being reached despite several rounds of talks.

Financial markets have been whipsawed over this period as a steady increase in tit-for-tat tariffs have slowed global trade and raised the risk of recession for some countries.

Underscoring the damage, Japan’s exports fell in September for the 10th straight month, while South Korea’s exports for the first 20 days of October dived 19.5% year-on-year, data on Monday showed.

Chinese bourses on Friday revised rules that would allow Hong Kong-listed dual-class shares to be included in the Stock Connect scheme for the first time, potentially benefiting popular tech companies such as Xiaomi Corp (1810.HK) and Meituan Dianping (3690.HK).

The rule change, which will take effect on Oct. 28, could be a positive for Hong Kong shares, which have been battered during months of often violent protest against Chinese rule of the former British colony.

The British government insists Brexit will take place on Oct. 31, but uncertainty over how British lawmakers will respond could weigh on sentiment for sterling.

The leader of the House of Commons says the government plans to put the new Brexit deal to a debate and vote on Monday, but it is unclear if the speaker of the House will let this happen.