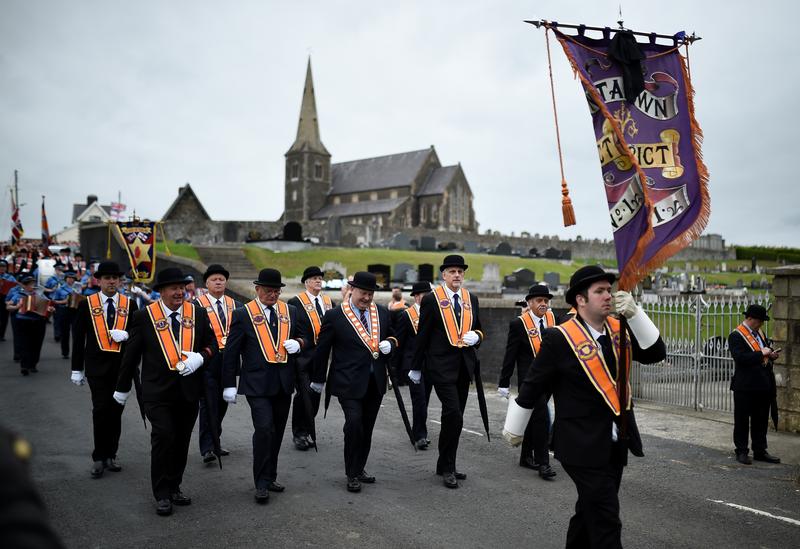 BELFAST (Reuters) – The head of Northern Ireland’s influential Orange Order said on Sunday unionists in the province should avoid staging violent protests over British Prime Minister Boris Johnson’s Brexit deal despite feeling that they had been let down.

The deal struck with EU leaders last week has been met by fierce opposition from pro-British politicians in the region, including Johnson’s Democratic Unionist Party (DUP) allies, who say it weakens Northern Ireland’s place in the United Kingdom.

“There is a feeling people need to do something but I would be encouraging people that it isn’t a case for street protest at this time,” Orange Order Grand Secretary Mervyn Gibson told Reuters in a telephone interview.

“I wouldn’t like to see loyalist violence. I think this is a time for cool heads, and violence only plays into the hands of republicanism,” he said.

The 30,000-member Orange Order, a Protestant organization, is central to the culture for Northern Irish loyalists – named for their allegiance to the British throne – and will strongly influence whether unionists take to the streets in big numbers to protest.

Gibson, a Presbyterian minister whose society holds annual parades that often raise tensions between Irish nationalist Catholics and pro-British Protestants, said there is “something wrong” when people in Northern Ireland must fill in customs forms and those in Scotland, England and Wales, the other parts of the United Kingdom, do not.

A 1998 peace accord largely ended three decades of sectarian and political conflict in Northern Ireland that cost some 3,600 lives, including some in attacks in mainland Britain and Ireland.

The border between EU member Ireland and Northern Ireland has been open as a part of that accord, but this has created a dilemma over how to avoid reinstating a hard border once Britain leaves the bloc, something that the EU believes would be jeopardize peace.

Under the proposed Brexit deal, Northern Ireland would remain in the United Kingdom’s customs area but tariffs would apply on goods crossing from mainland Britain to Northern Ireland if they were deemed to be headed further, to Ireland and the bloc’s single market.

But the DUP’s hopes of convincing pro-Brexit members of Johnson’s Conservative Party to join them in opposing the deal may prove a longer shot if those lawmakers believe it will not fan unrest and put Northern Ireland’s fragile peace at risk.

Many unionist politicians, including DUP deputy leader Nigel Dodds are members of the Orange Order.

“I think we have been let down by him (Boris Johnson), badly. It’s a deal that could see us sleepwalk in to a united Ireland. He hasn’t understood the unionist position, it wasn’t until now people are beginning to realize that,” Gibson said.

“This deal needs a unionist response from across the board. Parts of the deal need changed because this deal isn’t a good deal for unionism. It orientates us to Dublin economically and we are an integral part of the United Kingdom so should be treated as such.”