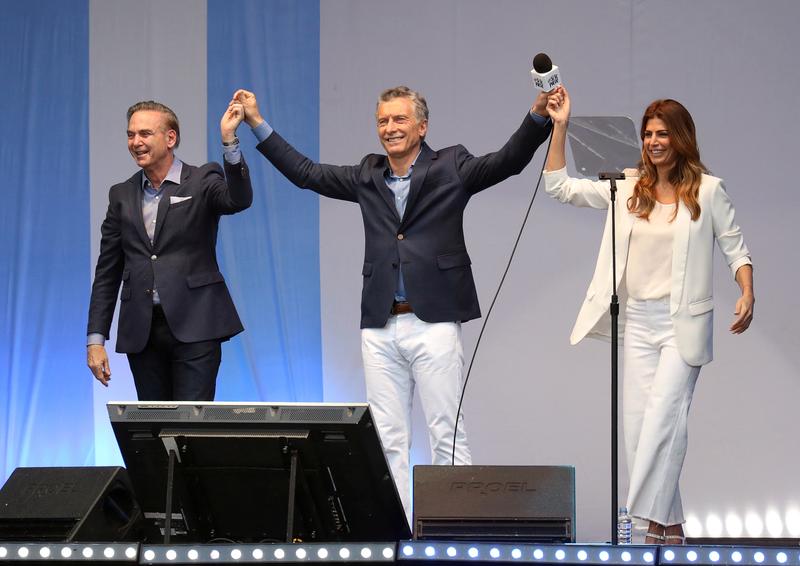 BUENOS AIRES (Reuters) – Argentine President Mauricio Macri called on “angry” voters to get behind him ahead of presidential elections next week, as he looks to defy the odds and rein in Peronist challenger Alberto Fernandez, who beat him heavily in a primary vote in August.

Huge crowds gathered in the southern hemisphere spring sunshine in the center of Buenos Aires on Saturday, carrying Argentine flags and “yes we can” banners. The event was one of a series of Macri campaign rallies around the country.

The strong turn-out underscores Macri’s enduring popularity in the relatively affluent capital. But opinion polls indicate voters overall want to oust the center-right leader in the Oct. 27 vote after being hit hard by economic turmoil.

Pollsters show center-left Fernandez some 20 percentage points ahead of Macri as the election looms, after he won by around 16 points in the primaries. A candidate needs 45% of the vote, or 40% plus a 10-point lead, to win outright in the first round.

Macri called on voters to help him turn the election around and said all was not yet lost.

“It’s not just any election, it is an election that defines our present and our future for many, many years,” Macri told the crowds, accompanied on stage by his wife and his vice presidential candidate Miguel Angel Pichetto.

“We have to tell all our friends who may still be angry, may be doubting, that we need them.”

Macri, who came to power in 2015 promising market reforms, open-door trade policies and strong investment, has been scuppered by a string of debt and currency crises that pulled the country into recession and sparked fears of default.

Inflation is running at an annual rate of above 50%, the peso is one of the world’s weakest currencies this year and domestic industries have been hurt by weak consumption. Over 35% of the population has sunk below the poverty line.

Hernán Lombardi, a politician and Macri ally, said on the sidelines of the rally that while the government had not got everything right, it offered a way forward for the country.

“We had many difficulties, there are things that we could solve and others that we did not, but we have a vision of the future of Argentina for the world,” Lombardi said. “That is why we are asking for four more years.”