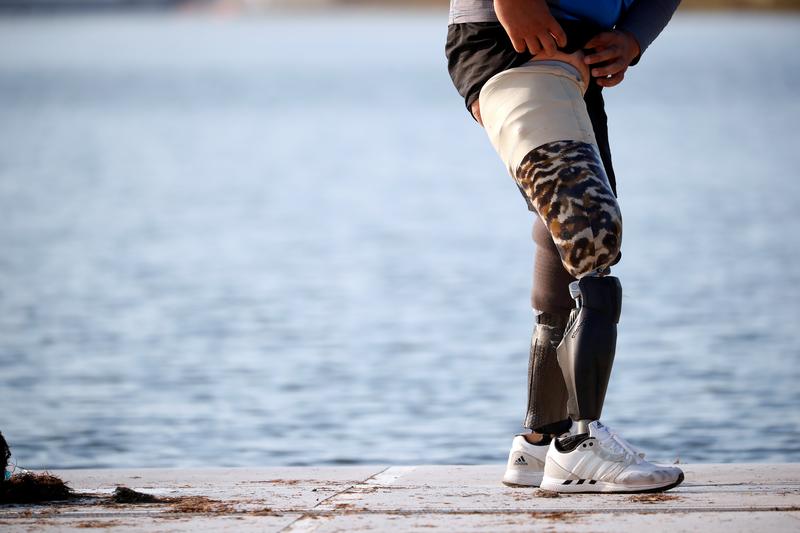 SEOUL (Reuters) – Pulling with smooth, steady strokes along a rowing course on an artificial lake, South Korean Paralympic hopeful Ha Jae-hun is the picture of calm determination, but it has taken him four years and 21 rounds of surgery to find this peace.

Ha lost his legs when he stepped on a landmine just inside the Demilitarized Zone (DMZ) along the border with North Korea. He was just 21.

The South Korean staff sergeant had volunteered to lead an early morning patrol after a colleague was assigned to training. That made him the first to go through an entry gate into the DMZ, signaling to the seven others on the patrol to wait, as he stepped forward.

The next thing Ha remembered was being thrown to the ground in unspeakable pain, both his legs stripped to the bone. The other soldiers were also wounded, though less severely.

Ha is now hoping to turn the rowing skills he picked up in rehabilitation into a place at the Paralympics at next year’s summer games.

“I just felt so relaxed when I went out on the water in a boat for the first time,” Ha said during his training session.

“I have to be careful and stay focused on the river, which doesn’t allow for other thoughts, and keeps me at ease.”

Former South Korean Army sergeant, first class, Ha Jae-hun, who lost both his legs in 2015 when he stepped on a North Korean landmine while on a patrol in the demilitarized zone (DMZ), puts on his artificial legs after a practice session at Misari Rowing Stadium in Hanam, South Korea September 24, 2019. REUTERS/Kim Hong-Ji

The incident on that fateful August morning has forever changed Ha’s life. He now relies on prosthetic legs, which he said he was so glad to learn to use as he could finally walk again, albeit “like a baby taking his very first steps”.

Apart from the physical pain, Ha said he also had to fight to quell feelings of hatred for North Korea, which South Korea blames for planting the landmine he stepped on.

“I wouldn’t say I don’t get mad at North Korea,” he said. “But just as I was a soldier myself, those who laid the mines must have followed an order. So sometimes I wonder what’s the point of blaming them.”

Ha left the military in January and joined a national para rowing team, winning a series of national and global competitions. He is hopeful but realistic about his chances as a newcomer, and aims to earn a spot at the Tokyo games and to eventually win a gold medal in France in 2024.

On Thursday, he won a gold at a national para sports competition, beating a record he set last year by 30 seconds.

“It was my first race last year. I had no skills, nothing but physical power, but I won. It was absolutely thrilling, I was like, ‘this is it’,” Ha said.

Ha’s physical strength and willpower, as well as the discipline gained from his time in the military, fueled his rapid ascent in the endurance sport, said Lim Myung-woong, the national team coach who encouraged his transition.

Ha likes to wear shorts to put his black prosthetic legs on show, part of his efforts to help change social attitudes towards people with disabilities.

“This isn’t something to be ashamed of,” he said, staring at his blades with a faint smile.