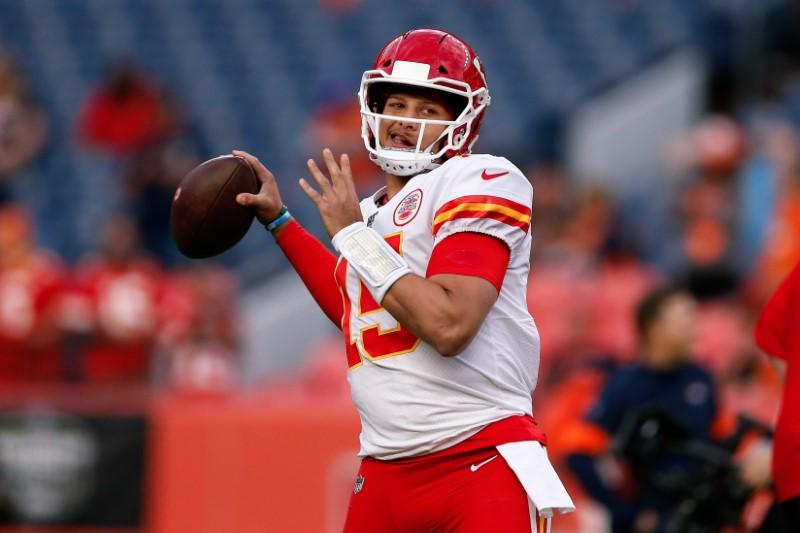 (Reuters) – Kansas City Chiefs quarterback Patrick Mahomes, the NFL’s reigning MVP, suffered a right knee injury on Thursday that leaves the immediate future in question for him and one of the league’s title contenders.

Mahomes was forced from the game against the Denver Broncos after getting hurt during a quarterback sneak in the second quarter in which he plowed forward amid a pile of players.

He remained lying on the field for a couple of minutes in obvious pain before being helped to the sidelines. He eventually walked to the X-ray room at Denver’s Empower Field at Mile High, but was quickly ruled out of the contest.

The NFL Network reported that Mahomes’ kneecap was dislocated. He will undergo an MRI to determine the extent of the damage.

The Chiefs (5-2) earned a 30-6 win over the Broncos, and Mahomes greeted the team in the locker room, leading a postgame rally with a sleeve on his right leg.

Mahomes appeared optimistic as he tweeted after the victory: “Awesome team win! Love my brothers! Thank you for all the prayers! Everything looking good so far!”

Mahomes, 24, set the National Football League (NFL) on fire last season in his first year as a starter, throwing 50 touchdowns and leading the Chiefs to the AFC Championship Game.

He has thrown 15 touchdowns and just one interception this season for Kansas City, which for now will play veteran quarterback Matt Moore while awaiting news on its franchise player.

“I’d say our whole organization has our fingers crossed right now, really hoping for the best for him,” Chiefs defensive back Tyrann Mathieu told reporters.