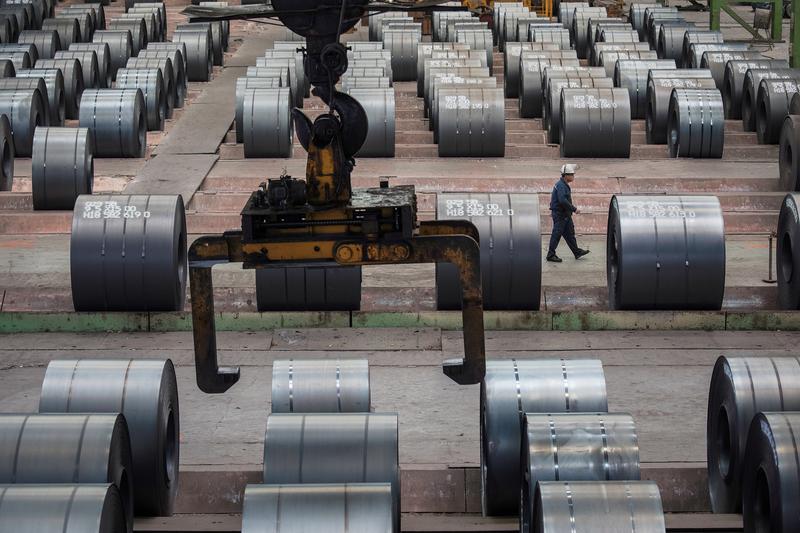 BEIJING (Reuters) – China’s monthly crude steel output slid to a six-month low in September, official data showed on Friday, as mill operations were hit by a raft of restrictions aimed at cutting pollution ahead of parades marking the country’s National Day on Oct. 1.

Average daily output in September was 2.76 million tonnes, according to Reuters calculations based on the NBS data, down 1.8% from the previous month.

For the first nine months of the year, China churned out 747.82 million tonnes of steel, up 8.4 % from the same period last year, the NBS data showed.

Production curbs in northern China ahead of the National Day celebrations came as major steelmaking districts in the Beijing-Tianjin-Hebei zone issued a pollution alert in the final week of September.

The weekly utilization rate at blast furnaces in steel mills across the country plunged in late September, falling to 56.2% in the week ended Oct. 4, the lowest level in more than seven years, according to data compiled by Mysteel consultancy.

September’s output drop came before the Ministry of Ecology and Environment outlined its annual anti-pollution plan for this year’s winter heating season, setting a target for concentrations of harmful PM2.5 emissions to be cut by an average of 4%.

But analysts do not expect a plunge for steel output in coming months.

“Environmental restrictions are not the decisive factor for steel supply,” said Tang Binghua, analyst with Founder CIFCO Futures, speaking before the data was released. “Output is mainly driven by profits.”

China’s property investment grew 10.5% year on year in September, boosted by a higher pace of new construction starts, which quickened to a 6.7% rise from a year earlier, according to Reuters calculation based on official data released on Friday.