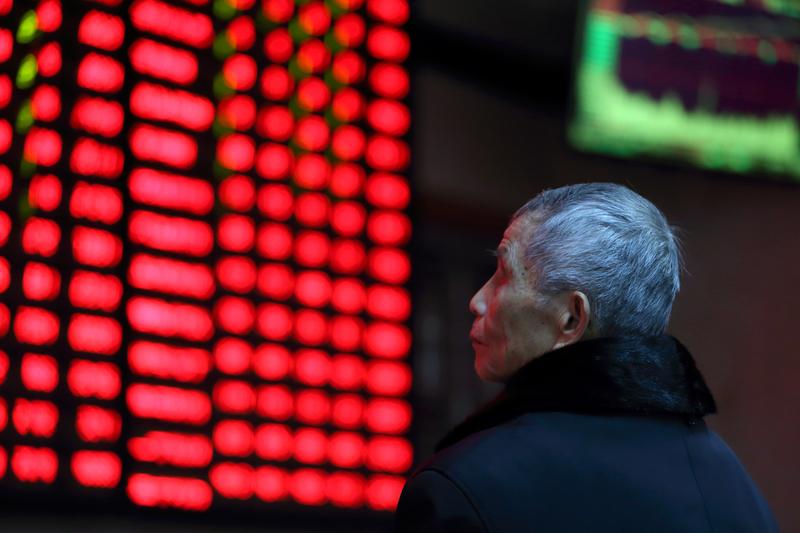 FILE PHOTO: A man looks on in front of an electronic board showing stock information at a brokerage house in Nanjing, Jiangsu province, China February 13, 2019. REUTERS/Stringer/File Photo

China’s economy grew 6.0% in the third quarter, less than expected, and the weakest pace in at least 27-1/2 years, as the Sino-U.S. trade war hit demand at home and abroad.

While the downbeat data raises the prospect that Chinese policymakers could prepare more measures to boost growth, analysts and market players said Beijing has relatively little room for significant easing.

“How much traction is monetary policy going to get? If there is any short-term move (higher) here in Asia it will genuinely be only short-term players because we’re not far from printing 5 (percent) in China GDP, and that’s not going to be good for risk assets,” said Greg McKenna, strategist at McKenna Macro.

“It doesn’t matter how excited you get about stimulus, it is not going to be good for risk assets.”

The disappointing Chinese data came as Japan’s core inflation slowed to near 2-1/2-year lows in September, raising expectations that the Bank of Japan could add to its already massive monetary stimulus.

Sterling, which had enjoyed its biggest rising streak since October 1985 and hit a five-month high on the back of the Brexit deal, gave up ground on Friday morning amid doubts that the agreement would receive parliamentary approval. The pound eased 0.31% to buy $1.2848. GBP=

“Whatever was agreed last night with the EU still has to go through the British parliament…the uncertainty surrounding that still hasn’t changed one iota,” said James McGlew, executive director of corporate stockbroking at Argonaut in Perth, Australia.

Equity markets had enjoyed a bounce on Thursday from the initial Brexit news, with the S&P 500 .SPX briefly topping 3,000 points for the first time in more than three weeks.

Helping to alleviate immediate trade war worries, China said on Thursday that it hoped to reach a phased agreement in its trade dispute with the United States as soon as possible.

The dollar index .DXY, which tracks the greenback against a basket of six major rivals, was barely lower at 97.592.