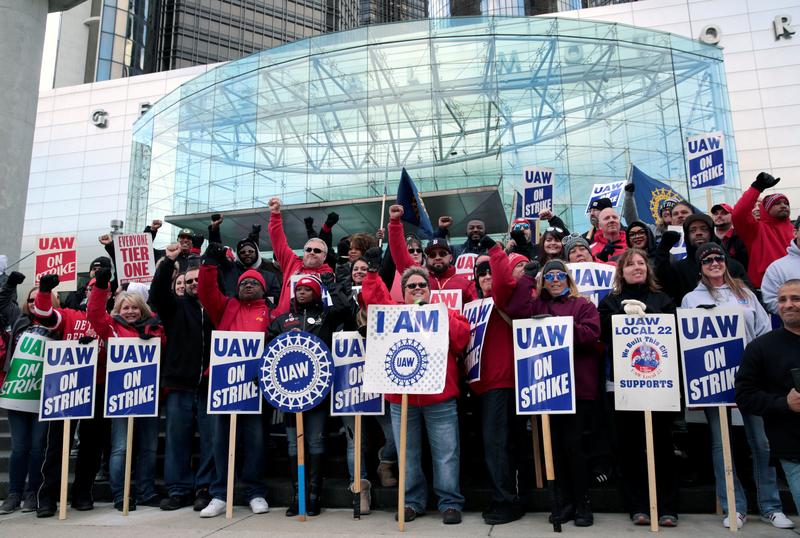 DETROIT (Reuters) – The United Auto Workers union wrung higher pay and better coverage for temporary workers from General Motors Co (GM.N) as part of its tentative deal to end a month-long U.S. strike, but the deal would also allow the automaker to move forward with closing three plants, the union said on Thursday.

The highlights of the agreement were released by the UAW after the union’s national council, representing GM plants across the United States, reviewed the terms of the four-year deal. It will now be up to the 48,000 workers to ratify the deal.

It was not immediately clear whether the workers would end their strike at that point or stay on the picket lines while the voting occurs – a process that could last up to two weeks.

The strike began on Sept. 16, with UAW negotiators seeking higher pay for workers, greater job security, a bigger share of profit and protection of healthcare benefits. Other issues included the fate of plants GM has indicated it may close, and the use of temporary workers.

The strike cost GM an estimated $2 billion according to analysts, hurt auto suppliers and played a role in U.S. manufacturing output falling more than expected in September.

The longest nationwide strike against a Detroit automaker since 1970 became a political event. Democratic presidential candidates joined UAW picket lines, eager to win union votes in Midwest swing states. For his part, U.S. President Donald Trump put pressure on GM Chief Executive Mary Barra before the strike to preserve jobs at a car plant in Lordstown, Ohio, that she had targeted for closure.

However, under the deal, GM will move ahead with closing Lordstown and two parts plants in Baltimore and Warren, Michigan. Workers from Lordstown on Thursday were outside GM’s Detroit headquarters, where UAW leaders were meeting, to protest the planned agreement.

GM also appears to have dodged a significant addition to its long-term balance sheet liabilities by agreeing to make a one-time cash distribution to UAW members eligible for pensions.

Separate from the UAW deal, GM on Thursday confirmed plans for an electric battery plant near the Lordstown complex that could eventually employ 1,000 people. Sources have said the battery plant would be a joint venture, where the workers are represented by the UAW and earn in the range of $15 to $17 an hour. The company did not comment on the deal with the UAW.

GM has said it plans to sell the Lordstown plant to a group affiliated with electric truck startup Workhorse Group Inc (WKHS.O) that would initially employ 400 people. A Workhorse spokesman could not immediately be reached for comment.

GM also is moving ahead with plans to invest $9 billion in its U.S. plants over the life of the next UAW deal, sources said. It also would create or retain 9,000 UAW jobs, a substantial number of which would be new, a person familiar with the plans said. The UAW contract summary did not address these figures.

As part of the push to protect jobs, the UAW said the union and company will jointly form a committee that would meet at least quarterly to discuss the impact of future technologies like electric and self-driving vehicles and their impact on UAW members. This group would address instances where work has shifted out of the union due to new manufacturing processes.

The agreement includes 3% pay raises in the second and fourth years, and 4% lump-sum payments in the first and third years, the UAW said. GM also agreed to make temporary workers with three years of service permanent.

Fulltime UAW members will also receive an $11,000 payment after the contract is ratified, and active temporary employees will receive $4,500, the union said. It also said the $12,000 cap on profit-sharing payments to members has been eliminated.

The UAW also had pushed for full-time employees earning less than the top wage rate of $32 an hour to progress to that level faster, resulting in all permanent employees reaching the top level within four years.

The UAW said GM also agreed to leave the union’s healthcare coverage untouched, meaning there will be no additional costs to members.

The union said GM has agreed to put “new product” in the company’s Detroit-Hamtramck assembly plant as part of the deal. Details were not provided in the UAW summary but sources have said the plant will build electric trucks.

If the deal is approved by the workers, the union will next begin negotiations with Ford Motor Co (F.N) or Fiat Chrysler Automobiles NV (FCA) (FCHA.MI), covering many of the same issues. The UAW previously agreed to temporary contract extensions with both automakers while it focused on GM.

A successful ratification is not a sure thing as workers during the 2015 talks initially rejected a deal with FCA before eventually approving a revised offer.

This year’s talks have been overshadowed by a widening federal investigation into corruption at the union, although officials and workers said they were focused on the negotiations.

Reporting by Paul Lienert and Joseph White in Detroit; Additional reporting by David Shepardson and Ben Klayman in Washington; Editing by Tom Brown and Matthew Lewis