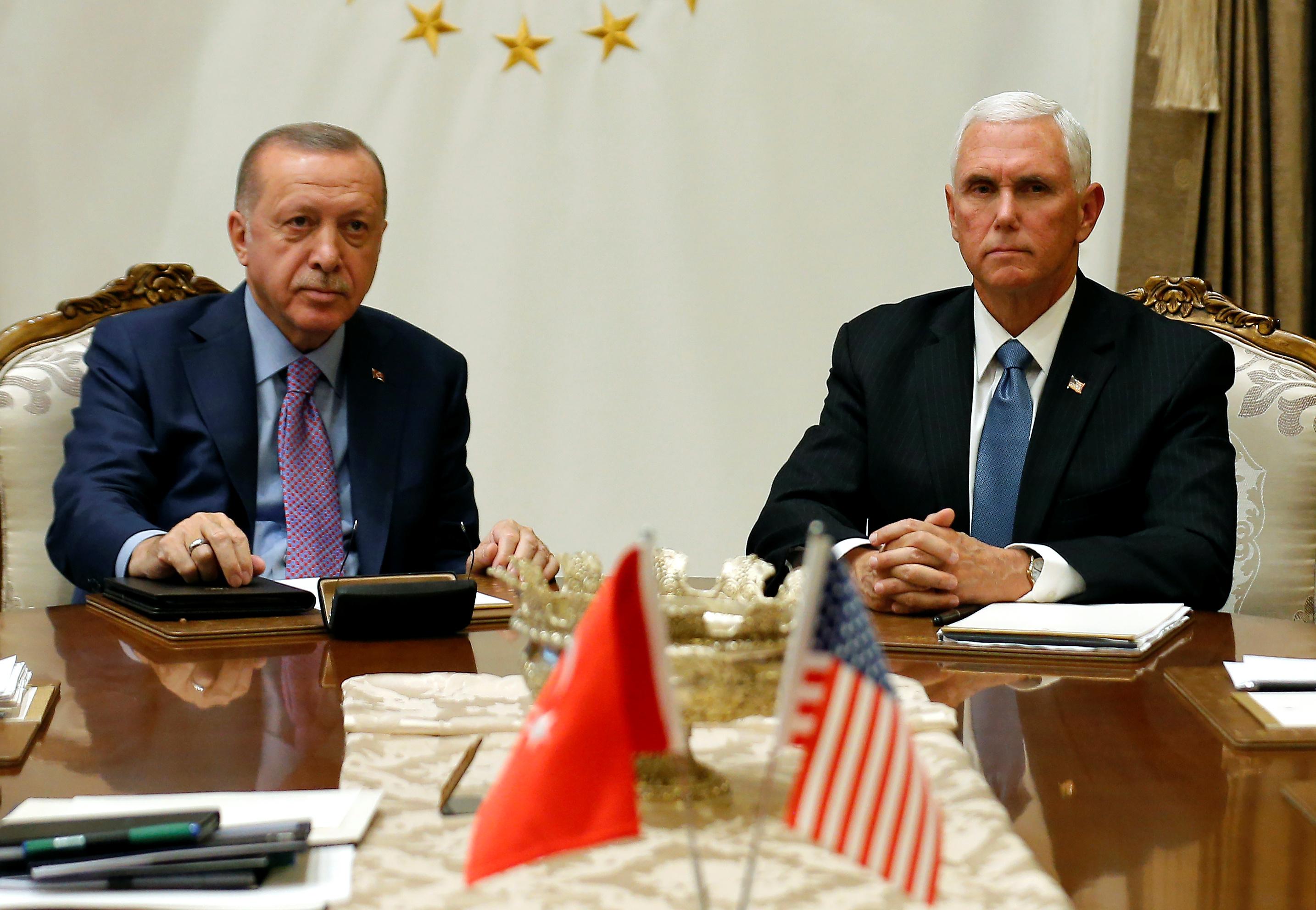 ANKARA (Reuters) – Turkey agreed on Thursday to pause its offensive in Syria for five days to let Kurdish forces withdraw from a “safe zone” Ankara had sought to capture, in a deal hailed by Washington but which Turkish leaders cast as a complete victory.

The truce was announced by U.S. Vice President Mike Pence after talks in Ankara with Turkey’s President Tayyip Erdogan, and was swiftly hailed by President Donald Trump, who said it would save “millions of lives”.

But if implemented it would achieve all the main objectives Turkey announced when it launched the assault eight days ago: control of a strip of Syria more than 30 km (20 miles) deep, with the Kurdish YPG militia, formerly close U.S. allies, obliged to pull out.

“The safe zone will be primarily enforced by the Turkish Armed Forces,” a joint U.S.-Turkish statement released after the talks said.

A Turkish official told Reuters Ankara got “exactly what we wanted” from the talks with the United States. Turkish Foreign Minister Mevlut Cavusoglu described it as a pause, solely to allow the Kurdish fighters to withdraw.

Kurdish fighters would be forced to give up their heavy weapons and their positions would be destroyed, Cavusoglu said. He declined to call the agreement a “ceasefire”, saying ceasefires could be agreed only by legitimate sides, and not by the Kurds that Turkey considers terrorists.

Pence said Washington had already been in contact with the Kurdish-led Syrian Democratic Forces (SDF), which had agreed to withdraw and were already pulling out.

“Thank you to Erdogan,” Trump said. “Millions of lives will be saved!”

“Today the United States and Turkey have agreed to a ceasefire in Syria,” Pence told a news conference after more than four hours of talks at the presidential palace in Ankara.

The deal struck with Erdogan also provided for Turkey not to engage in military operations in the flashpoint Syrian border town of Kobani, Pence said. Cavusoglu said Turkey had given no commitments about Kobani.

Pence added that he had spoken to Trump after the talks and that Trump had expressed his gratitude for the ceasefire accord. Washington’s main goal had been to halt the violence, and it had succeeded, Pence said.

The Turkish assault has created a new humanitarian crisis in Syria with 200,000 civilians taking flight, a security alert over thousands of Islamic State fighters abandoned in Kurdish jails, and a political maelstrom at home for Trump.

Trump has been accused of abandoning Kurdish-led fighters, Washington’s main partners in the battle to dismantle Islamic State’s self-declared caliphate in Syria, by withdrawing troops from the border as Ankara launched its offensive on Oct. 9.

Trump had defended his move on Wednesday as “strategically brilliant”. He said he thought Pence and Erdogan would have a successful meeting, but warned of sanctions and tariffs that “will be devastating to Turkey’s economy” otherwise.