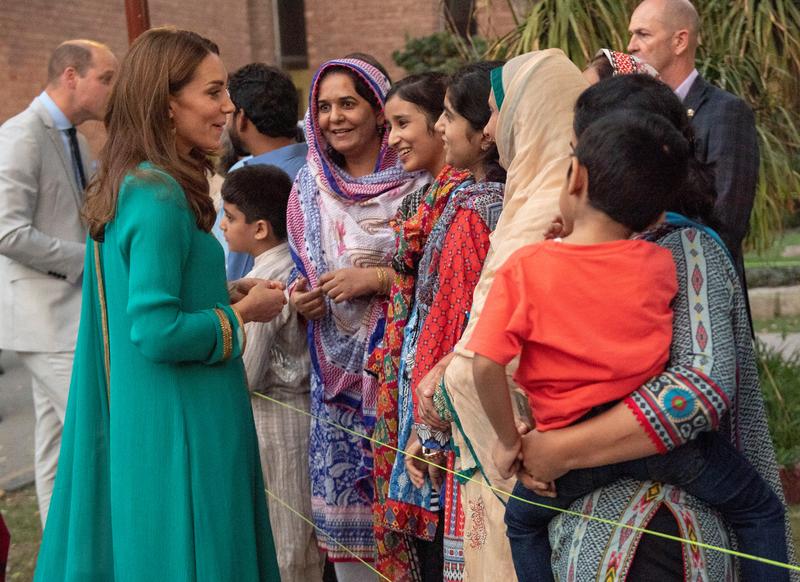 LAHORE, Pakistan (Reuters) – Britain’s Prince William and his wife Kate told reporters on board their flight on Thursday that they were fine, after the plane was forced to abort landings in the Pakistani cities of Rawalpindi and nearby Islamabad due to a severe thunderstorm.

The RAF Voyager carrying the royals, who are on a four-day official visit to Pakistan, returned to the eastern city of Lahore where the couple had spent the day.

William, who has previously worked as a search and rescue helicopter pilot, told reporters after they landed in Lahore that he and Kate were fine and joked that the problems had been caused because he was flying the plane.

A Reuters photographer on board said there had been no issues before the plane took off, but turbulence began to affect the flight, which was due to take just 26 minutes, as the plane attempted to land.

The journey eventually took more than two hours and the photographer described it as one of the most turbulent flights he had experienced in 25 years of regular flying.

A senior civil aviation official in Lahore told Reuters that the couple could try again to fly to Islamabad later on Thursday if weather permitted, or else they would stay in Lahore.

Earlier in the day Prince William, who is second in line to the British throne, and Kate had joined locals in a cricket match in Lahore before a trip to a cancer hospital that his mother, Princess Diana, visited a year before her death.

The Pakistani government hopes the couple’s four-day official visit will boost the country’s image as a tourist and business destination, after decades of sectarian violence and political unrest.

William and Kate, who have donned traditional Pakistani dress by local designers during their trip, have highlighted education and the impact of climate change in the country.

At a children’s home in Lahore and in her first public remarks of the tour, Kate said the couple were “moved and touched” by their experiences in the country.

“Being here in Pakistan this week, William and I have seen on several occasions how family is at the heart of your culture,” she said, before wishing three of the children happy birthday in Urdu, one of Pakistan’s official languages.

At a meeting earlier in Lahore, one of Pakistan’s largest cities and its cultural capital, the chief minister of Punjab state Usman Bazdar told the couple their visit “will further strengthen relations between the two countries”.

They later headed to the Shaukat Khanum Memorial Cancer Hospital, founded by Imran Khan, a family friend of the Prince and the current prime minister of Pakistan. Diana made a high-profile visit to the hospital, a year before her death in a car crash in 1997.

Additional reporting by Mubasher Bukhari in Lahore and Asif Shahzad in Islamabad; Editing by Mike Collett-White