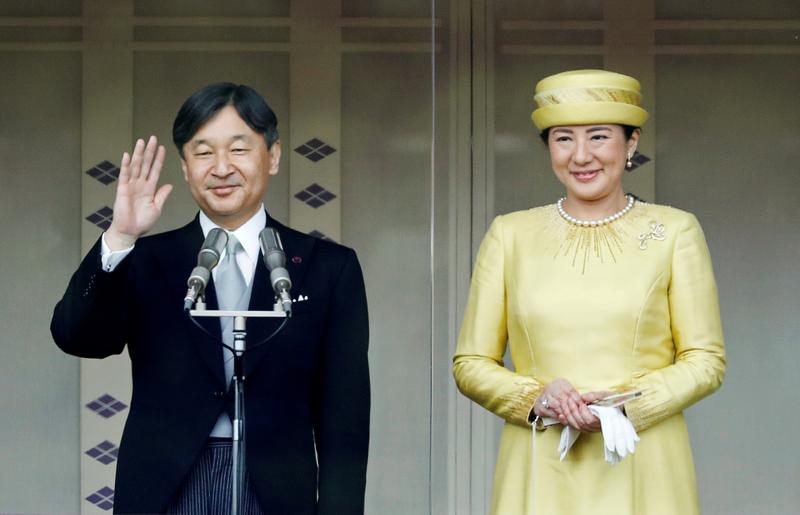 TOKYO (Reuters) – Japanese Emperor Naruhito and Empress Masako have brought a more relaxed touch to one of the world’s oldest monarchies, chatting in English with foreign visitors, laughing with children and even playing with dogs.

They are Japan’s first imperial couple with university degrees, to speak several languages and to have years of experience of living abroad – when the emperor even did his own laundry.

Six months after formally ascending to the Chrysanthemum Throne, they appear to be fulfilling hopes they will make it more international and bring it closer to the lives of ordinary people.

They have also pleasantly surprised many Japanese who worried they might have trouble living up to their predecessors, Emperor Akihito and Empress Michiko – especially Empress Masako, who has struggled for years with what palace officials term an “adjustment disorder”.

“Though the previous emperor and empress were seen as being close to the people, these two seem even closer. I think it’s because they appear to be more like ordinary people,” said Hideya Kawanishi, an assistant history professor at Nagoya University.

“They’re just suited to the current era in so many ways. For example, there are photos showing the emperor with a smartphone. They seem a lot more like us.”

Emperor Naruhito, 59, the eldest of three children, is the first to be cared for by his mother instead of being raised by wet nurses and tutors. His parents made efforts to give him an ordinary childhood, including sending him to school with a packed lunch.

A student of water transport, he graduated from Gakushuin University and then spent two years at Oxford, which he has described as some of the best years of his life. He later defied palace officials to marry diplomat Masako Owada, now 55, who was largely raised abroad, after she caught his eye at a concert.

The two have one daughter, 17-year-old Aiko, who as a woman cannot ascend the throne.

The couple’s overseas experience was evident when they hosted a banquet for U.S. President Donald Trump soon after their investiture in May. After chatting with Trump and his wife, Melania, Emperor Naruhito finally deferred to the protocol of using an interpreter.

“I think the previous emperor and empress could have spoken in English too, but these two do it so innately – it’s a real tribute to all their time abroad,” Kawanishi said.

The couple seems a world away from the staid, aloof court of old.

Emperor Naruhito has posed for selfies with members of the public while overseas, and in Japan the two recently laughed with children and played with dogs during a visit to a dog shelter.

“Their relative youth is appealing and this is not something you could imagine the previous imperial couple ever doing, at least not so naturally,” Kawanishi said.

Empress Masako’s struggles with palace life and her adjustment disorder, which kept her largely out of the public eye for a decade, were in stark contrast to Empress Michiko, whose performance was often termed “flawless”.

As an empress with a ready smile, she has largely dispelled the concern about her health.

“She has improved with regard to her public duties and is participating in various events,” said Hidehiko Kasahara, a professor at Keio University who specializes in royal issues.

“Of course, her health is a mental issue so there are ups and downs, but worries have rather faded.”

Though an increase in responsibilities means Empress Masako may have more constraints on her time, ascending to the position may have also given her more freedom in the protocol-bound court.

For now, she and the emperor appear to be proceeding cautiously with only minor adjustments, though this may change as they settle into their roles.

“When Masako meets foreign dignitaries she has confidence and her conversation has substance,” Kasahara said.

“The fact that she can act as she wants means there is less stress. Rather, it’s a plus for her recovery.”