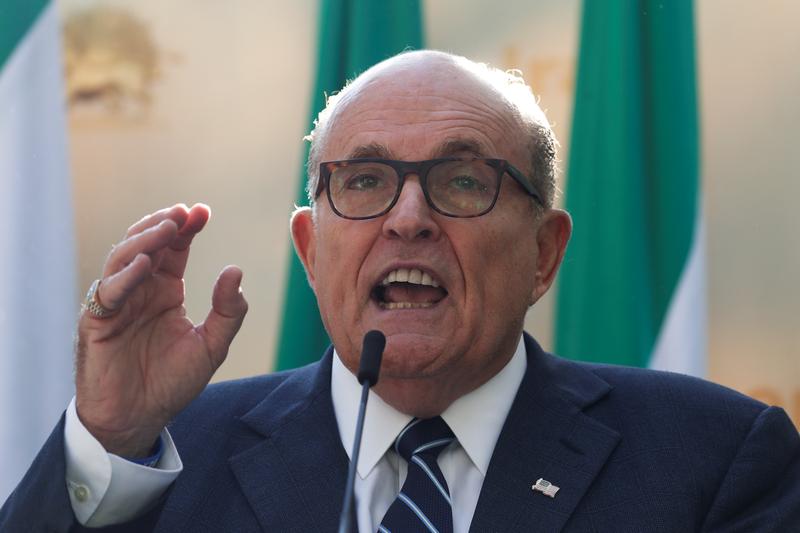 (Reuters) – President Donald Trump’s efforts to pressure Ukraine into investigating a top rival in the 2020 U.S. presidential election prompted Speaker Nancy Pelosi and other Democrats in the House of Representatives to move ahead with an impeachment inquiry, threatening his presidency.

The scandal has also featured an extensive cast of Ukrainian officials.

Here are some of the other main American players in the drama.

Trump’s personal attorney, a former New York mayor and 2008 presidential candidate, is a central figure in a scandal that has led to the impeachment inquiry.

Giuliani says Biden improperly pressured Ukraine to fire its top prosecutor, Viktor Shokin, in order to stop an investigation into a company that put his son, Hunter, on its board.

Giuliani said on Oct. 15 that he would not comply with a congressional subpoena to turn over documents related to his work.

The former vice president has long led a crowded field of 19 candidates hoping to win the Democratic Party’s nomination to face Trump in the November 2020 election.

Biden has accused Giuliani of peddling “false, debunked conspiracy theories” and has urged U.S. television networks to stop booking him to appear on air.

As vice president under Trump’s predecessor, former President Barack Obama, Biden played a leading role in U.S. efforts to dismiss Shokin over corruption concerns. Biden says he told then Ukrainian President Petro Poroshenko in 2015 that the United States would withhold $1 billion in loan guarantees if Shokin remained on the job.

Biden’s son served on the board of Burisma Group, a privately held natural gas producer, between 2014 and 2018. Biden says he has done nothing wrong, but admitted that family connections may have helped him get the position.

Ukrainian officials announced on Oct. 4 that they would review 15 previous investigations related to Burisma, and the country’s National Anti-Corruption Bureau said in September it was investigating activity at Burisma between 2010 and 2012, prior to Hunter Biden’s involvement. The company denies any wrongdoing.

Ukraine’s top prosecutor, Ruslan Ryaboshapka, told Reuters he was not aware of any evidence of wrongdoing by Hunter Biden.

In the July phone call, Trump encouraged Zelenskiy to work with Barr, the U.S. attorney general, to investigate the Bidens. Barr did not learn of the call until several weeks after it took place, and has not communicated with Ukraine, according to the Justice Department.

But as the nation’s top law enforcement official, Barr has taken several actions that have benefited Trump and caused Democrats to question his independence. He decided in March not to prosecute Trump for obstruction of justice for interfering with Special Counsel Robert Mueller’s investigation of Russian attempts to influence the 2016 election.

When he released Mueller’s report in April, Barr echoed Trump’s refrain that the special counsel had found “no collusion” between his campaign and Russia. Mueller in fact had concluded that there was not enough evidence to bring criminal conspiracy charges, but outlined numerous examples where campaign officials welcomed Russian interference in the election.

The U.S. secretary of state, a vocal Trump supporter, was on the phone call between Trump and Zelenskiy but did not say whether he heard anything unusual. He has ordered State Department officials not to cooperate with the impeachment inquiry, with limited success.

House Foreign Affairs Committee Chairman Eliot Engel says Pompeo is a “fact witness” and has accused him of stonewalling their inquiry.

Before becoming the United States’ top diplomat, Pompeo was Trump’s CIA chief and before that a Republican congressman.

A former U.S. special representative for Ukraine, Volker was one of two American diplomats who pressured their Ukrainian counterparts to launch investigations that could benefit Trump, according to text messages he provided to Congress. Volker worked with Giuliani on the effort, the messages show.

Those communications show he told a Ukrainian official that a meeting between the countries’ two leaders was tied to Kiev’s agreement to investigate the 2016 U.S. election. He later pressured Ukraine to issue a public statement announcing probes into Burisma and the 2016 election.

Sondland, a Trump donor who serves as U.S. ambassador to the European Union, was also involved in the effort to get Ukraine to investigate Biden and the 2016 election, the text messages show.

In one exchange, Sondland sought to quell concerns by another U.S. ambassador, Bill Taylor – who as charge d’affaires in Ukraine is the senior diplomat there – that the Trump administration was withholding foreign aid until Kiev agreed to help with Trump’s political campaign, and suggested they “stop the back and forth by text.”

Sondland is expected to testify on Capitol Hill on Oct. 17 in response to a subpoena after he initially refused to participate.

The former U.S. ambassador to Ukraine was abruptly recalled to the United States in May, leaving Washington without a top-level diplomatic presence in a country on the front lines of the West’s standoff with Russia.

A career diplomat with the U.S. State Department who had served under Republican and Democratic administrations, Yovanovitch told lawmakers that Trump ousted her based on “unfounded and false claims” after she had come under attack by Giuliani.

She expressed about private interests circumventing professional diplomats “for their own gain, not the public good.”

Trump called her “bad news” in his July phone call with Zelinskiy.

The U.S. energy secretary is one of three officials, along with Sondland and Volker, who was assigned to take the lead on Ukraine after Yovanovitch was ousted, according to George Kent, a U.S. State Department official who spoke to lawmakers on Oct. 15.

The Associated Press reported that Perry pressed Zelenskiy to install certain people on the board of Ukraine’s state-owned gas company. Perry has denied wrongdoing. Democrats have subpoenaed him for Ukraine-related documents.

Trump’s former Russia adviser told lawmakers on Oct. 14 that she and her boss at the time, former National Security Adviser John Bolton, were alarmed by the efforts to pressure Ukraine to investigate Biden. She said Bolton characterized Giuliani as “a hand grenade who is going to blow everybody up.”

As the intelligence community’s inspector general, Atkinson handled a complaint by an unidentified whistleblower who first reported concerns about the Trump administration’s efforts to improperly involve Ukraine in U.S. affairs. Atkinson deemed the complaint credible, and decided that it qualified as an “urgent concern” which by law should be shared with Congress.

However, the Justice Department and the acting director of national intelligence, Joseph Maguire, determined that the complaint should not be shared with lawmakers. Atkinson then notified Congress of the dispute, which ultimately led to both the complaint and the summary of Trump’s July 25 call being released.

Atkinson said he will fight to protect the identity of the whistleblower, who has been the subject of attacks by Trump.