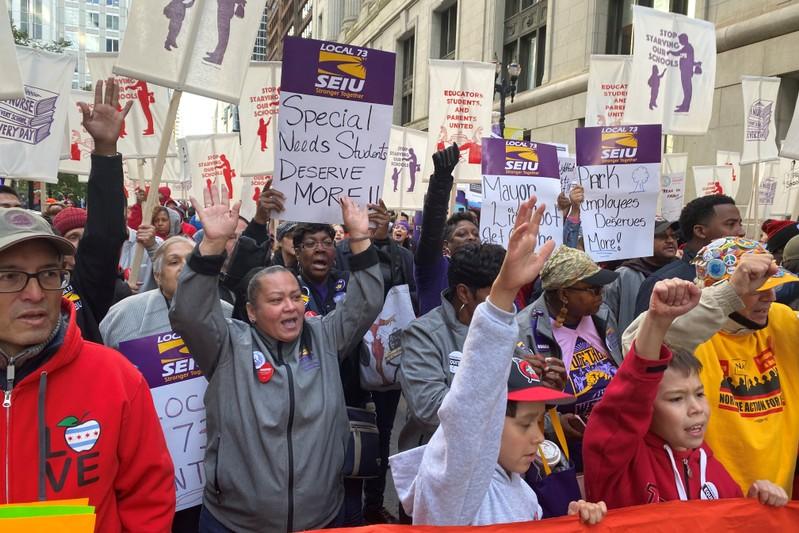 CHICAGO (Reuters) – Chicago Public Schools (CPS) said it was canceling classes on Thursday for 361,000 students after union leaders recommended teachers walk off their jobs if protracted labor negotiations failed to produce a deal by midnight.

FILE PHOTO: Hundreds of teachers and supporters march, days before the teacher’s union was set to go on strike if a contract settlement was not reached, in Chicago, Illinois, U.S. October 14, 2019. REUTERS/Brendan O’Brien

School buildings will stay open during the day for students who need a place to go, officials said. Schools will serve breakfast and lunch, but all after-school activities, including sports, tutoring and field trips, have been canceled.

Leaders of the Chicago Teachers Union (CTU) informed the district’s bargaining team that they would recommend a strike should proceed on Thursday, Mayor Lori Lightfoot said.

“We need to get a deal done,” she said during an afternoon briefing. “Make no mistake, this work stoppage will put a significant strain on working families. We need to do right by our children.”

“If she cannot land a deal with teachers for public schools in Chicago, then you have to question her ability to get work done in this city,” she told reporters earlier in the day.

Lightfoot, who took office in May, said the city had reached a labor agreement with the union representing city park workers.

The agreement with the union includes wage increases ranging from 10% to 28% over the four and a half years and for paid vacation to hourly employees based on the number of hours worked. The deal ensures that park facilities across the city will remain open for children during the strike.

The district’s bargaining team has offered 80 proposed changes to the current contract related to issues requested by the union, Lightfoot said.

The proposal would provide support for oversized classes, enforceable targets for reducing class sizes and adding more support staff across the district, she said.

“At every turn we bent over backwards to meet the union’s needs,” she said earlier in the day.

The mayor said the union’s demands would cost the district an additional $2.5 billion annually.

CPS finances “are still recovering from the brink of insolvency, and we do not have unlimited funds,” the mayor said.

The district’s credit ratings remain at the non-investment, or “junk” status, although they have improved in the wake of a revised state-wide school funding formula that boosted revenue for CPS operations and pension payments.

Thousands of Chicago teachers staged a one-day walkout in 2016 to protest the lack of a contract at that time and failures to stabilize the finances.

Reporting by Brendan O’Brien and Karen Pierog in Chicago; Editing by Matthew Lewis