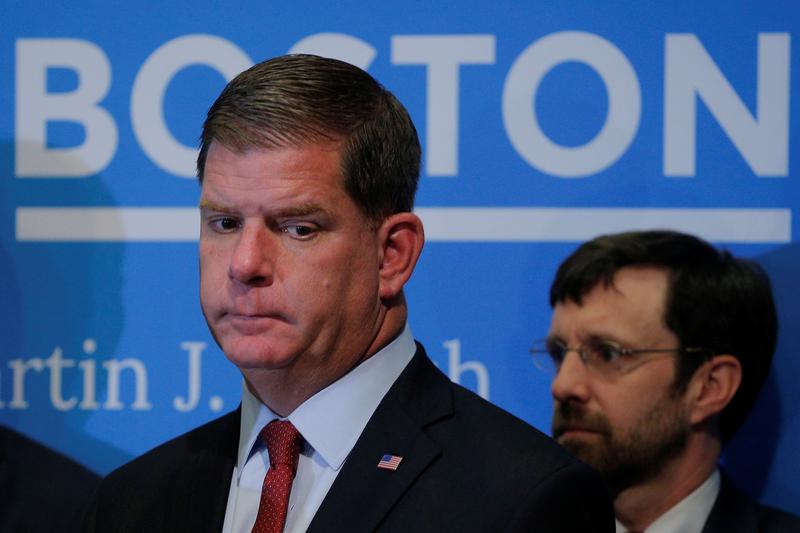 BOSTON (Reuters) – The City of Boston’s retirement board on Wednesday voted unanimously to end its relationship with money manager Kenneth Fisher, whose firm has lost almost $1 billion in assets after allegations he made disparaging remarks about women last week.

Boston Mayor Marty Walsh listens during a news conference to urge U.S. President Donald Trump not to withdraw from the Paris Climate Accord at City Hall in Boston, Massachusetts, U.S. May 31, 2017. REUTERS/Brian Snyder

“Boston will not invest in companies led by people who treat women like commodities. Reports of Ken Fisher’s comments and poor judgment are incredibly disturbing, and I have asked our retirement board to take a vote to end any relationship with Fisher Investments,” Walsh said in a statement.

So far, pension plans run for Boston, the state of Michigan and the city of Philadelphia have announced they will stop investing more than $900 million with Fisher Investments.

In a video posted Oct. 9 on Twitter, Alex Chalekian, chief executive of a financial advisory firm, called attention to the comments Fisher made at a financial conference last week.

Chalekian said Fisher made derogatory comments about genitalia, picking up girls and financier Jeffrey Epstein, among other topics. Epstein committed suicide in August while being held in jail awaiting trial on sex trafficking charges.

Fisher, who was not available for comment, has apologized for his remarks. Fisher Investments Chief Executive Damian Ornani has said the firm is launching a task force to address diversity and inclusion at the firm itself.

Comments of public figures have come under increasing scrutiny in the era of social media and as the #MeToo movement, has exposed widespread sexual harassment or abuse of women in multiple spheres of American life and ended the careers of dozens of powerful men in media, politics, entertainment and business.

Meanwhile, Boston-based mutual fund giant Fidelity Investments and pension plans around the country have said they are reviewing whether to keep investing money with Fisher Investments.

Fisher controls an investment company that manages about $112 billion for individuals, mutual funds, trusts and pensions. In recent years, the company has landed several dozen companies, many of them small businesses, to manage their employees’ 401(k) investments, U.S. regulatory filings show.