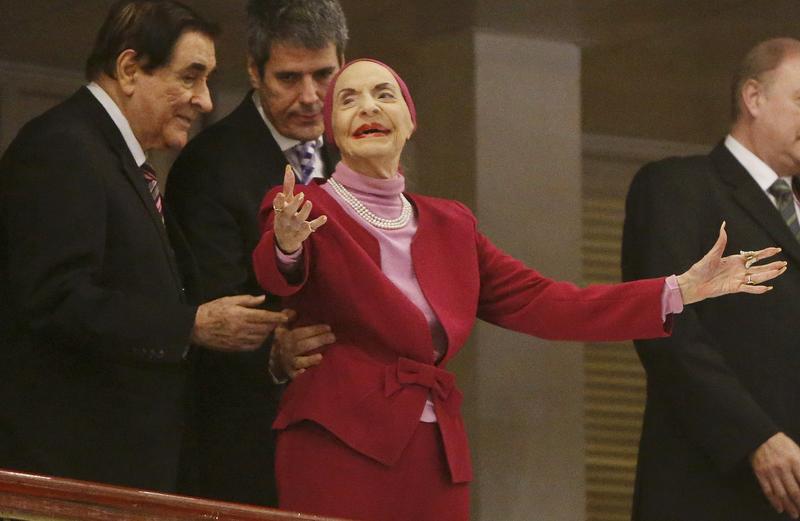 (Reuters) – Legendary Cuban ballerina Alicia Alonso, who achieved global acclaim in the 1940s and went on to run the internationally renowned National Ballet of Cuba for decades, died on Thursday at age 98, state-run media said.

FILE PHOTO: Cuba’s prima ballerina assoluta and director of the Cuban National Ballet, Alicia Alonso, reacts to the audience as she takes her seat to listen to U.S. President Barack Obama make a speech to the Cuban people in the Gran Teatro de la Habana Alicia Alonso in Havana, March 22, 2016. REUTERS/Jonathan Ernst/File Photo

“Alicia Alonso has gone and left an enormous void, but also an unbeatable legacy,” President Miguel Diaz-Canel said in a post on Twitter. “She positioned Cuba at the altar of the best of dance worldwide. Thank you Alicia for your immortal work.”

One of the greatest 20th century ballerinas, Alonso used her star power to make a sometimes elitist art form popular on her Caribbean island, forging the world’s largest ballet school with a unique bravura style.

She immediately identified herself with the 1959 revolution and, with her dance partner of many years, the Russian Igor Youskevich who died in 1994, performed for the bearded guerrillas of Fidel Castro’s rebel army after they took power in Havana. She remained closely associated with the Communist government until the end.

So revered is Alonso in Cuba – where a perfume carries her name and the huge Coppelia ice cream parlor is named after one of her signature roles – that she carried the rare title of prima ballerina assoluta, reserved for only the most exceptional of dancers.

“Aside from having been an extraordinary dancer herself, her legacy is a devotion to the classical perfection of ballet,” Jane Hermann, U.S. agent for the National Ballet of Cuba since 1978, said in a phone interview on Thursday.

“In Cuba, it’s so multicultural that you can’t get the exactly perfect body lines that are expected in classical ballet. In spite of that she brought together the training and rehearsal perfection that established as good a classical company as any in the world today.”

Alonso’s breakout role was “Giselle” in New York on Nov. 2, 1943, when she replaced British dancer Alicia Markova, who fell ill, in the newly formed company that would become the American Ballet Theatre.

For her debut in the ethereal 1841 French Romantic role, Alonso had learned the steps with her hands while recovering from eye surgery.

Alonso proved “that a Latino dancer could achieve the highest levels of excellence in a style reserved almost exclusively to Slavic or Anglo performers,” National Ballet of Cuba historian Miguel Cabrera wrote in his book “Alicia Alonso: Reality and Myth.”

Petite with an angular face, Alonso danced until her 70s despite having trouble walking, and continuing to direct her company with the help of trusted artists who served as her eyes.

“She has a very vivid imagination which allows her to see things in her mind as they would appear on stage,” Suki John, an American scholar on Cuban dance whom Alonso had invited to choreograph for the National Ballet of Cuba, told Reuters in a July 2015 interview. “She developed this visual acuity as a young dancer when she had one of her first operations on her eyes.”