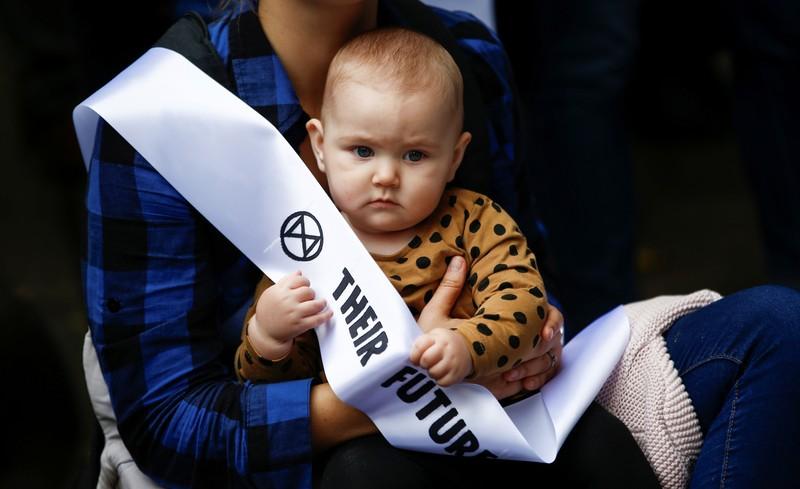 LONDON (Reuters) – About 150 mothers with babies and young children defied a police ban on climate protests to stage a “nurse-in” outside the London offices of Google on Wednesday, while activists launched a parallel protest at the premises of its subsidiary YouTube.

The mothers said they were acting in response to a report in Britain’s Guardian newspaper last week that said Google has made “substantial” contributions to climate deniers in Washington despite saying it supports climate action.

“It’s just a terrible betrayal to all the parents, families and children that are suffering as a result of the climate and ecological crisis,” said Lorna Greenwood, one of the organisers of the mass nurse-in.

Google said in the Guardian report: “We’re hardly alone among companies that contribute to organisations while strongly disagreeing with them on climate policy.”

The mothers gathered despite police issuing a ban on protests by the Extinction Rebellion group in London late on Monday.

Extinction Rebellion Youth, a group affiliated with the main movement, issued a statement accusing YouTube, which is owned by Google, of offering a disproportionate platform to people who dispute the scientific consensus that climate change is caused by burning fossil fuels.

“This is not about censorship of individuals’ freedom of speech: it is about preventing YouTube being exploited by fossil fuel companies seeking to warp the public debate in their favor,” it said.

Police say they have arrested 1,642 people in the capital since Extinction Rebellion launched a fresh wave of civil disobedience on Oct. 7.

The group wants to force governments to take action to tackle climate change and the accelerating loss of plant and animal species by using disruptive tactics such as blocking roads and bridges, and glueing themselves to buildings.

It says at least 1,400 people have also been arrested in 20 cities around the world since last week, with protests taking place in central Brussels, New York, Amsterdam and elsewhere.

Hundreds of the group’s supporters gathered for a planned rally in London’s Trafalgar Square on Wednesday despite the police ban. The square was cleared of camping protesters earlier in the week.

Amnesty International said the police ban was an “unlawful restriction” on the rights to freedom of expression and peaceful assembly. The police say Extinction Rebellion would be entitled to demonstrate in ways agreed in advance with the authorities.