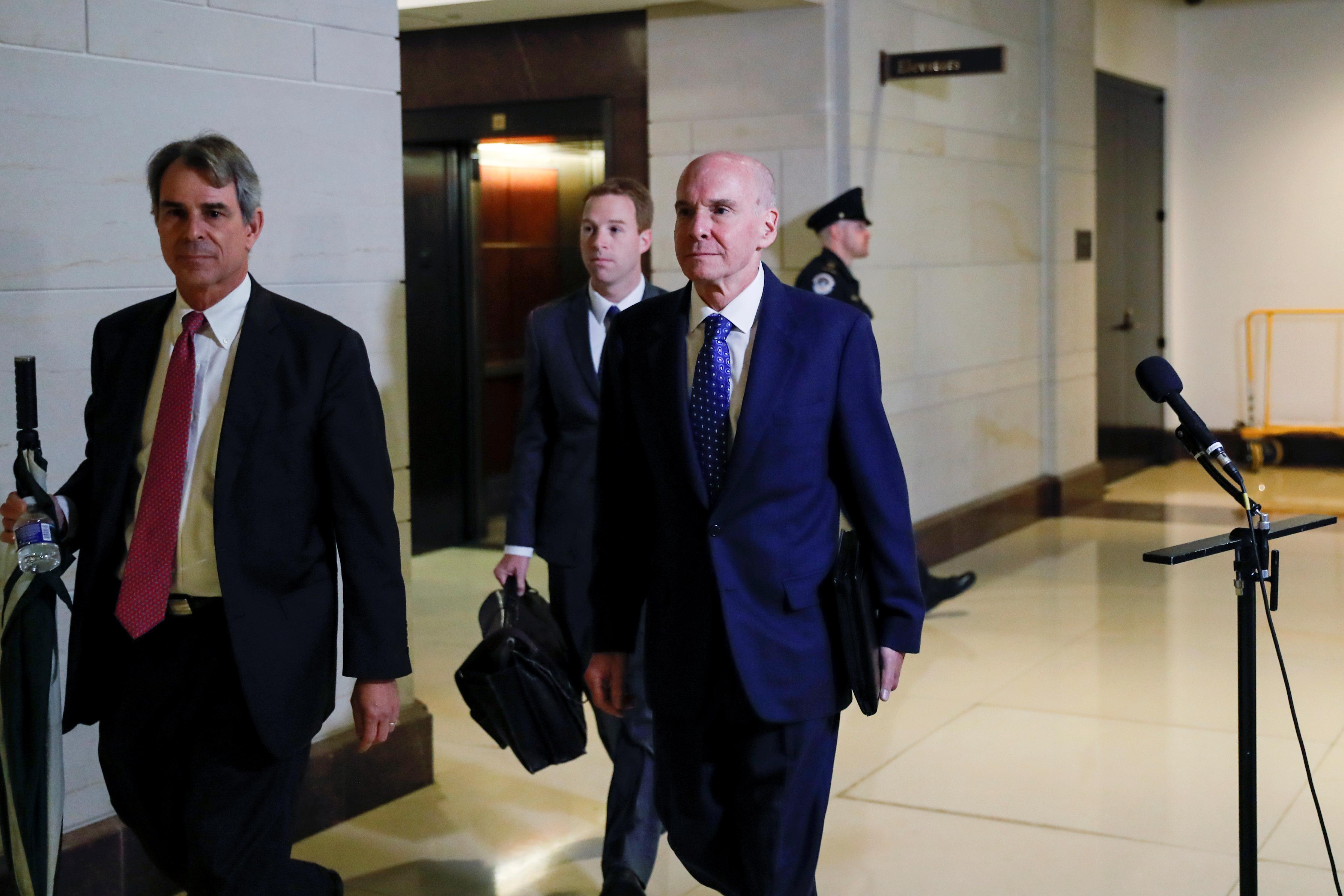 Former Pompeo adviser Michael McKinley, the latest senior administration official to give closed-door testimony to the Democratic-led inquiry, sat for five hours of questions from investigators as congressional Republicans stepped up attacks on a process that could end in Trump’s impeachment by the House of Representatives before the end of the year.

Lawmakers are examining whether Trump improperly pressured Ukraine to launch an investigation of former Vice President Joe Biden, a top political rival and leading candidate for the Democratic 2020 presidential nomination.

A veteran diplomat who had served as ambassador to Brazil and Afghanistan, McKinley was expected to tell investigators that some career diplomats had their careers derailed for political reasons while he served as adviser to Pompeo from May 2018 until last Friday, according to the Washington Post.

The newspaper said he resigned over State Department leadership’s unwillingness to defend former U.S. Ambassador to Ukraine Marie Yovanovitch against an effort to intervene in the country for Trump’s political benefit. Yovanovitch, who was withdrawn earlier this year, told investigators last week that the president ousted her on “unfounded and false claims.”

Previous witnesses have described how policy staff were sidelined on Ukraine by Trump’s personal lawyer, Rudy Giuliani, and others. Investigators expect to hear next week from acting U.S. Ambassador to Ukraine William Taylor, who raised concerns that security aid was being withheld to pressure Ukraine, according to sources familiar with the matter.

“We’ve uncovered significant evidence of Trump’s abuse of power. And we’ll continue to expose the truth,” House Intelligence Committee Chairman Adam Schiff, who is leading the impeachment inquiry, said on Twitter on Wednesday.

Trump denounced the inquiry as a “witch hunt” on Twitter early on Wednesday and later told reporters that Democrats were being disrespectful. He accused House Speaker Nancy Pelosi of handing out subpoenas “like cookies.”

In related news, the FBI on Wednesday arrested David Correia, one of four people charged last week in an alleged scheme to funnel $1 million in donations to politicians and political candidates to benefit a planned marijuana business funded by an unnamed Russian businessman.

Ramping up attacks on Democrats, House Republicans complained of being denied access to witness transcripts and said they would introduce a censure resolution against Schiff.

A House vote to impeach Trump would lead to a trial in the Republican-controlled Senate that could result in his ouster. But so far, few Senate Republicans have criticized the president.

The House probe is focused on a July 25 phone call in which Trump pressed Ukrainian President Volodymyr Zelenskiy to investigate unsubstantiated allegations against Biden and his son, Hunter Biden, who was on the board of a Ukrainian gas company.

Trump has denied wrongdoing and defended his request to Zelenskiy. Biden and his son also deny wrongdoing.

Gordon Sondland, a Trump political donor and a key actor in the unfolding political drama as U.S. ambassador to the European Union, is expected to appear on Thursday in response to a subpoena after he initially declined to testify.