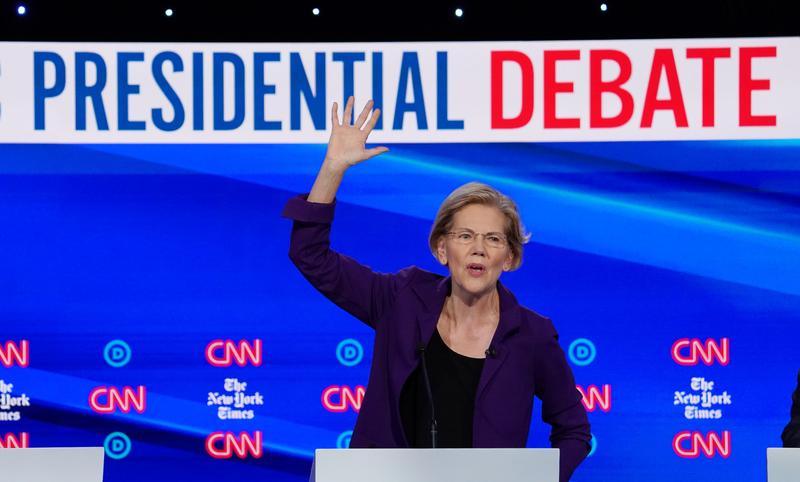 WASHINGTON (Reuters) – The barrage of questions fired at Elizabeth Warren at Tuesday’s debate in Ohio underscored her new front-runner status in the Democratic presidential race, but also lingering concern within the party over whether the progressive senator can defeat President Donald Trump next year.

Time and again on Tuesday, the U.S. lawmaker from Massachusetts faced skepticism from her Democratic rivals about her leftist agenda, ranging from taxing the rich, to potentially costly universal government-run healthcare, to free college tuition.

2020 election but that her push for sweeping change would cause another bitter split in the country after Trump’s already divisive presidency.

Warren’s recent surge in the polls – she is now considered a favorite for the nomination along with former Vice President Joe Biden – made her the top target at the debate, with moderates such as Biden, U.S. Senator Amy Klobuchar and Pete Buttigieg, the mayor of South Bend, Indiana, leading the charge.

In an interview with Reuters after the debate, Klobuchar, a Minnesota lawmaker who is competing with Biden and Buttigieg to appeal to Midwestern swing voters, said Warren needed to explain how she was going to pay for her sweeping proposals.

“I just think I have a better way, and I think it’s also important that she keeps not telling us how she’s going to pay for them,” Klobuchar said. “And, as I said, someone’s going to get that invoice, and she needs to tell us who it is.”

The debate highlighted the deep schism in the party that remains between its liberals and moderates, as well as persistent questions about Warren’s electability even as she continues to surge in most national polls.

Biden, who has painted himself as the leading centrist alternative to Warren, came into the debate with worries of his own. He has seen some slippage in polls and more recently been the target of a campaign of unsubstantiated allegations by Trump concerning his son Hunter’s business activities in Ukraine and China.

But that issue was only briefly touched upon – and by Biden himself, who tried to keep the focus instead on Trump and the impeachment inquiry the president faces as a result of a whistleblower complaint that he pressured Ukraine to investigate him and Hunter Biden.

Biden’s team had worked furiously in advance of the debate to defuse the issue, and his rivals showed little appetite for making it an issue.

For once, Biden was not at the center of the evening, reflecting the evolving nature of the Democratic race.

Warren’s advocacy for a universal government-run healthcare based on the Medicare plan for seniors, which could cost trillions of dollars, as well as for free public universities and a tax on the wealthy, has sparked concerns among some Democrats that her platform is politically unrealistic and could alienate independent and moderate voters if she emerges as the party’s nominee.

Her challengers have accused her of being evasive about whether middle-class taxes would have to be raised to pay for her healthcare plan.

At the debate, Buttigieg accused Warren of wanting “infinite partisan combat” that would continue to divide the country.

Afterward, Buttigieg, who raised the third-most amount of money among the candidates in the third quarter of the year, told CNN he felt it was important to take Warren on.

The first Democratic nominating contest in Iowa is less than four months away, adding an urgency to the jabs by Buttigieg and Klobuchar, among others, who have struggled to amass support.

“I think there was a real conversation tonight about approach,” said Antjuan Seawright, a Democratic strategist in South Carolina who advised Hillary Clinton’s two presidential campaigns. “There was an elevated effort to highlight the pragmatic versus the progressive.”

Amid the attacks, Warren stayed firm and vigorously defended her agenda. She ended up with the most screen time of all the candidates.

“Why,” she asked at one point, “does everyone else on this stage think it is more important to protect billionaires than it is to invest in an entire generation of Americans?”

The evening likely will do little to alter the dynamic between Biden and Warren as the party’s two current standard-bearers, although the announcement after the debate that U.S. Senator Bernie Sanders would be endorsed by high-profile progressive congresswoman Alexandria Ocasio-Cortez could spice up the race.

Biden and Warren are fiercely competing for votes in Iowa. Warren is hoping she can seize control of the race by winning there and then in New Hampshire, while Biden is looking to pair a win in Iowa with a victory in majority-black South Carolina, another early voting state.

He appeared to be addressing Warren directly late in the debate when he referred to other candidates being “vague.”

Warren countered by saying she was not afraid to “dream big.”

“For me,” she said, “this is about knowing what’s broken, knowing how to fix it, and, yes, I’m willing to get out there and fight for it.”

Judging from Tuesday’s debate, that fight is about to grow much more intense.