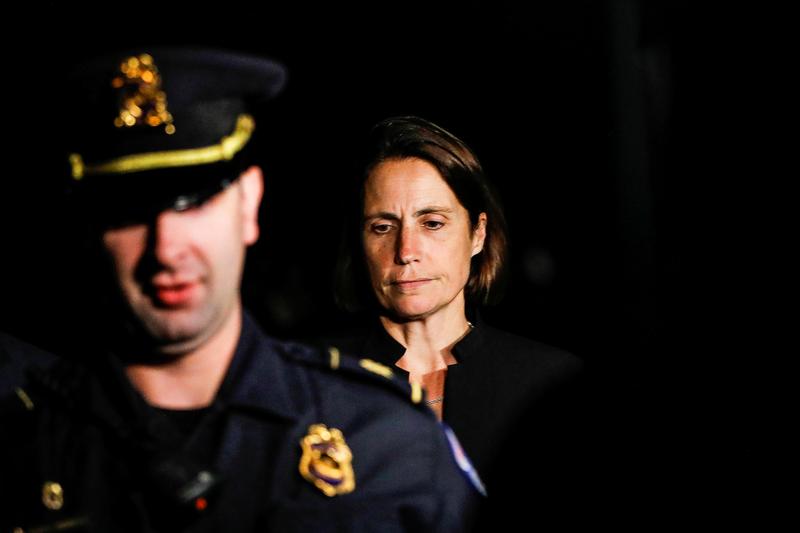 WASHINGTON (Reuters) – U.S. President Donald Trump’s former Russia adviser testified for more than nine hours on Monday behind closed doors as the latest witness summoned in the Democratic-led impeachment inquiry against Trump over his request that Ukraine investigate a domestic political rival.

Fiona Hill, former senior director for European and Russian Affairs on Trump’s National Security Council, made no comments to reporters on arriving or leaving a secure room in the U.S. Capitol where she spoke to the House Intelligence Committee and two other panels.

Raskin, a member of the House Judiciary and Oversight panels that also are investigating Trump, declined to give details of her testimony.

As they have done in the past, Republican lawmakers complained that the hearings were closed to the public and that transcripts were not being released.

The pace of the House Democrats’ investigation quickened on Monday as they lined up additional witnesses to testify in closed sessions.

Michael McKinley has agreed to appear voluntarily for a closed transcribed interview on Wednesday, just days after he announced his resignation as a senior adviser to Secretary of State Mike Pompeo.

Also, a person familiar with the proceedings confirmed that Deputy Assistant Secretary of Defense Laura Cooper would be interviewed by the committees on Friday.

Trump has denied wrongdoing in his dealings with Ukraine.

The Democrats’ inquiry could prompt the House to approve articles of impeachment – formal charges – leading to a trial in the Senate on whether to remove Trump from office. Unlike the Democratic-controlled House, the Senate is led by Trump’s fellow Republicans, who have shown little inclination to remove him.

Adding to the almost dizzying number of developments, the Wall Street Journal reported that federal investigators for at least the past couple of months have been questioning witnesses as they look into Rudy Giuliani’s business dealings in Ukraine. Giuliani has been acting as Trump’s personal lawyer.

Justice Department officials in Washington referred a request for comment to the U.S. District Court in the Southern District of New York, where a spokesman declined to comment.

Giuliani faces a Tuesday deadline to produce documents related to the Ukraine matter subpoenaed by the House Intelligence Committee. He has not said whether he will comply.

The former New York mayor has defended his actions as proper in his role as Trump’s lawyer.

In yet another development, Trey Gowdy, a former Republican congressman who was announced last Wednesday as joining Trump’s outside legal team for the impeachment fight, no longer will be doing so, at least for now, according to Jay Sekulow, a lawyer for Trump. Sekulow praised Gowdy last week as “a great asset” to the legal team.

The Trump administration’s removal in May of Marie Yovanovitch as U.S. ambassador to Ukraine may have figured in Hill’s testimony.

On Friday, Yovanovitch testified that she had been ousted based on “unfounded and false claims” after coming under attack by Giuliani, who had been working to get Ukraine to investigate former Vice President Joe Biden, a top contender for the Democratic nomination to face Republican Trump in the November 2020 presidential election.

The inquiry focuses on a July 25 phone call in which Trump asked Ukrainian President Volodymyr Zelenskiy to investigate unsubstantiated allegations against Biden and Biden’s businessman son, Hunter Biden, who had been on the board of a Ukrainian energy company.

Democrats have accused Trump of pressuring a vulnerable U.S. ally to dig up dirt on a domestic rival after withholding $391 million in U.S. security aid intended to help combat Russian-backed separatists in the eastern part of Ukraine. Zelenskiy agreed to investigate. Trump eventually allowed the aid.

The British-born Hill, who left her White House job shortly before the July 25 call but remained on the payroll into August, had advocated a tough U.S. approach on Moscow even as Trump was more accommodating toward Russian President Vladimir Putin. U.S. intelligence agencies have concluded that Russia interfered in the 2016 U.S. election with a campaign of hacking and propaganda intended to boost Trump’s candidacy.

On Thursday, committees are scheduled to receive testimony from Gordon Sondland, the U.S. ambassador to the European Union.

Sondland, a Trump backer and not a career diplomat, participated in a text message exchange with Bill Taylor, the top U.S. diplomat in Ukraine. Democrats say it reveals concern among aides that Trump’s pressure on Ukraine to investigate Biden was improper.

As talks continue over whether the whistleblower from within the U.S. intelligence community who prompted the inquiry will testify, Trump weighed in on Twitter, demanding that the person testify and that the individual’s identity be revealed.

Trump has questioned the patriotism of the whistleblower, who filed a complaint after the Zelenskiy call, saying Trump was improperly using the power of his office to solicit interference in the 2020 election from a foreign country.

Negotiations between representatives for the whistleblower and congressional committees were deadlocked over Senate Intelligence Committee requests that the individual provide testimony in person, while the House committees were willing to exchange questions and answers in writing, according to two people familiar with the negotiations.