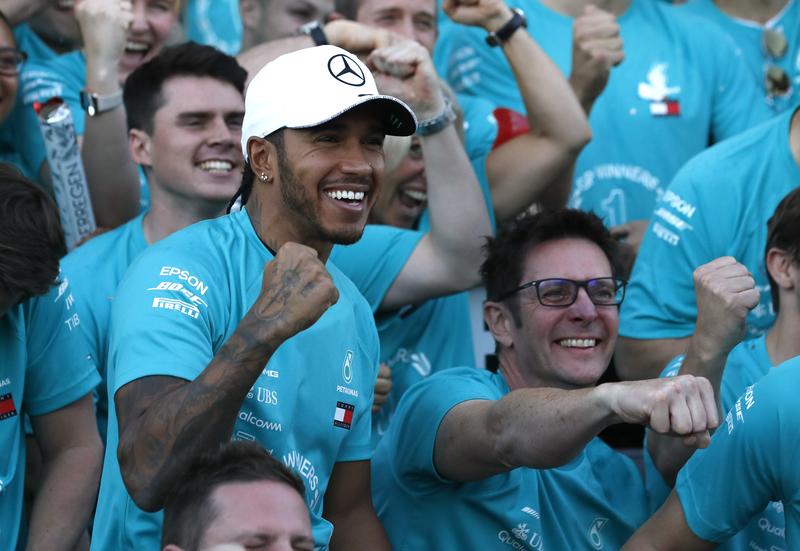 SUZUKA, Japan (Reuters) – Formula One champions Mercedes are wondering how far they can go after securing an unprecedented sixth successive title double in Japan on Sunday.

The Silver Arrows wrapped up the constructors’ crown with four races to spare at Suzuka, with only Lewis Hamilton and Valtteri Bottas now left in the running for the other championship.

Hamilton is 64 points ahead of the Finn, Sunday’s winner, and firmly on course to secure his sixth title with only Michael Schumacher — on seven — ahead of the Briton in the sport’s all-time record books.

“Every year we are trying to set objectives that motivate us,” Mercedes F1 principal Toto Wolff told reporters as the team celebrated.

“So we have beaten the Ferrari record now and we’ve got to reinvent ourselves for next year.”

Ferrari won six successive constructors’ titles between 1999 and 2004, with Schumacher taking five drivers’ crowns in a row from 2000-04.

Hamilton has already claimed several of Schumacher’s records but the two big ones — the most titles and races won — are still to be matched.

The 34-year-old is on 82 wins, nine short of Schumacher’s 91, with that also looking a realistic target for 2020 given that Hamilton is averaging 10 wins a season over the past six campaigns.

Mercedes are still far off Ferrari’s record 16 constructors’ championships and 15 drivers’ titles but making it six on Sunday was massive for a team who have tried to portray themselves as underdogs against a faster Ferrari this season.

“The pressure is enormous,” said Wolff. “The truth is you are setting your own bar very high, and your own expectations, and then just not meeting those expectations is extremely painful.”

Next season, with 22 races, will be the longest ever and Mercedes are already concerned that Ferrari have a performance advantage that they can carry over to good effect with stable rules before an overhaul in 2021.

Ferrari have been on pole for the past five races and locked out the front row in Suzuka, and Wolff said their could be no complacency and there was still plenty of work to be done.

“It’s always this mixture of feelings that on the one side you have won a sixth double, and you need to be overwhelmed, and on the other side we are just eager to get the performance back,” he said.

“We are so performance-driven that we’ve got to get the performance back into the car.”

Mercedes returned to Formula One as a fully-fledged constructor in 2010, taking over the title-winning Brawn GP team. They got off to a hesitant start but have dominated since the dawn of the turbo-hybrid era in 2014.

Sunday’s win was their 99th in Formula One, including those from when they last competed as a fully-fledged constructor in 1954 and 1955.

They have scored 86 of those victories in the last six seasons, with their biggest haul coming in 2016 when they won 19 of 21 races.

“I could spend a whole day trying to analyse what I think are the strengths of the group,” said Wolff.

“But there are just too many factors and so many faces come into my mind that I see through the year that are happy and tired.”