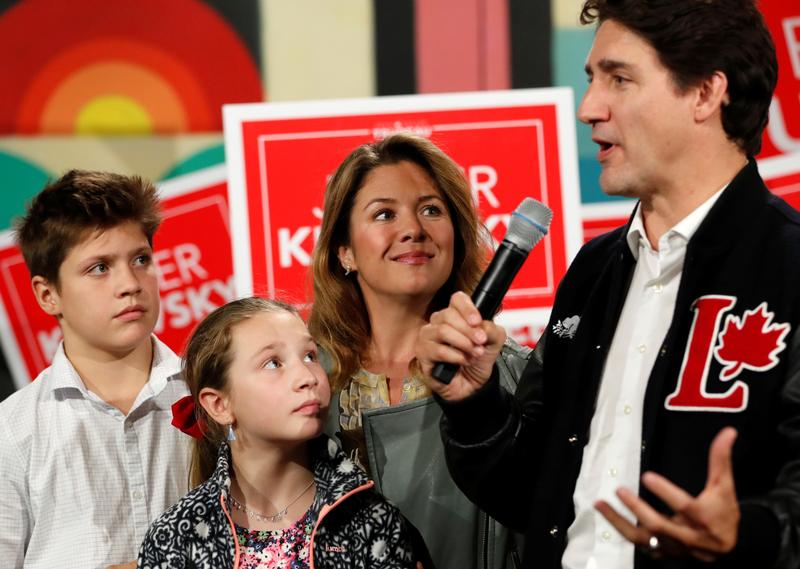 Trudeau’s remarks were unusually forceful, especially since the two leaders looked to have patched up relations after Trump accused the Canadian last year of being weak and dishonest.

Opinion polls put Trudeau’s Liberals even with the Conservatives of Andrew Scheer and suggest the ruling party will lose its majority in the House of Commons. That would leave the Liberals relying on smaller parties to govern.

Trudeau, campaigning on the Canadian Thanksgiving holiday, noted the Liberals had overseen the successful negotiation of a new U.S.-Mexico-Canada trade agreement last year. The talks were tough at times and Trudeau said Scheer had favored capitulating to the U.S. side.

“We need to continue to have a strong government with a clear focus on standing up for Canadians, standing up to Donald Trump, standing up to the forces of populism and chaos around the world,” Trudeau told reporters in Windsor, Ontario.

A Nanos Research poll released on Monday put the Liberals at

32.3% support and the Conservatives at 32.1%. The left-leaning New Democrats of Jagmeet Singh, the most obvious choice of partner for a Liberal minority government, were at 19.2%.

Singh wants more spending on social programs and higher taxes on the wealthy.

Scheer called on Canadians to give him a majority, saying the alternative was a coalition between the Liberals and New Democrats that would generate massive budget deficits.

“(It would be) a government where Justin Trudeau may be the spokesperson, but the New Democrats are calling the shots,” Scheer told reporters in Winnipeg, Manitoba.

Singh indicated on Sunday he was open to a coalition with the Liberals, who have struggled to open a lead since the emergence last month of photos from years ago showing Trudeau in blackface.

Canada has only had one formal coalition, in 1917 during World War One. The New Democrats have struck deals to keep minority Liberal governments in power, most notably from 1972 to 1974 and in 2005.

Asked about a possible coalition with the New Democrats, Trudeau replied: “I’m campaigning hard to stop Conservative cuts and elect a progressive government.”

Scheer said if he won, he would present a fiscal update within 100 days to introduce a series of tax credits.

The Conservatives announced their platform last week and outlined tens of billions of dollars in spending reductions.