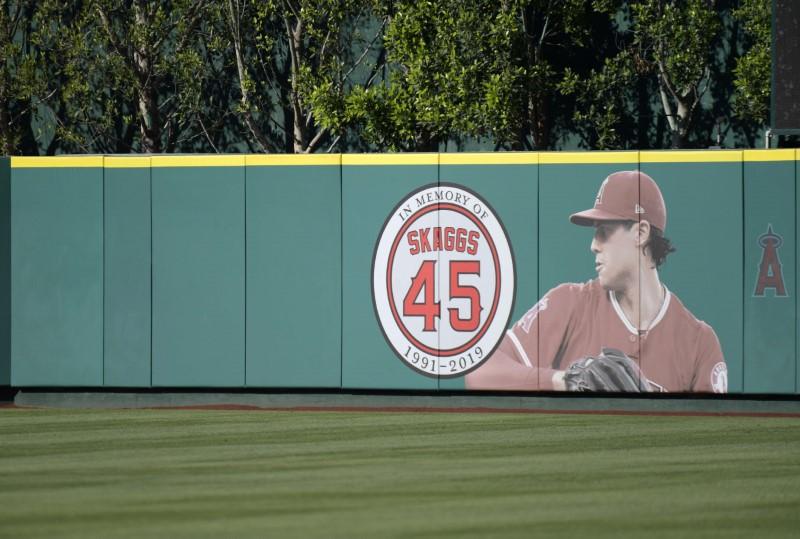 The Los Angeles Angels employee who claims he gave opioids to late pitcher Tyler Skaggs told ESPN on Sunday that he is coming forward because it is “time for everyone to stand up and take responsibility.”

FILE PHOTO: Jul 17, 2019; Anaheim, CA, USA; Detailed view of a memorial for Los Angeles Angels pitcher Tyler Skaggs on the outfield wall at Angel Stadium of Anaheim. Skaggs, 27, died at a hotel in Southlake, Texas, July 1, 2019, where he was found unresponsive prior to a game against the Texas Rangers. Mandatory Credit: Kirby Lee-USA TODAY Sports

Eric Kay, the team’s communications director whom ESPN reported is on paid leave as he deals with his own opioid addiction, issued a statement through his attorney to “Outside the Lines.”

“I felt and continue to feel that it is time for everyone to stand up and take responsibility for their respective roles in this,” the statement read. “Nothing anyone does will ever provide closure for the Skaggs family. I can’t, the Angels can’t, and the courts can’t, regardless of what happens there. But at least I can help them ‘know’ instead of ‘wonder.’ My hope is that there is some peace in that for them.”

Skaggs, 27, was found dead in a hotel room in Southlake, Texas, on July 1 when the Angels were in town to meet the Texas Rangers. His autopsy report, released Aug. 30, said Skaggs had oxycodone, fentanyl and alcohol in his system and listed the cause of death as choking on his own vomit.

“Outside the Lines” reported Saturday that Kay interviewed with U.S. Drug Enforcement Administration agents in both Dallas and Los Angeles field offices in September. Michael Molfetta, Kay’s attorney, confirmed details of what Kay told the DEA, which include:

** Kay provided oxycodone to Tyler Skaggs, used the drug with the late pitcher for years, and the team knew about Skaggs’ drug abuse.

** Kay gave Skaggs three oxycodone tablets before the Angels traveled to Texas and that Skaggs sought more on the road, but Kay couldn’t provide them.

** Five other Angels players used opiates while with the team, though the identities of the players named by Kay have not been made public.

“I made the decision to cooperate with law enforcement because I felt that it was the right thing to do,” Kay added in his statement to ESPN. “That is all I can do from this point on, if it comes with public shame and derision, I accept that.”

On Saturday afternoon, the Angels released a statement in response to ESPN’s initial report.

“We have never heard that any employee was providing illegal narcotics to any player, or that any player was seeking illegal narcotics,” Angels president John Carpino said. “The Angels maintain a strict, zero tolerance policy regarding the illicit use of drugs for both players and staff. Every one of our players must also abide by the MLB Joint Drug Agreement. We continue to mourn the loss of Tyler and fully cooperate with the authorities as they continue their investigation.”