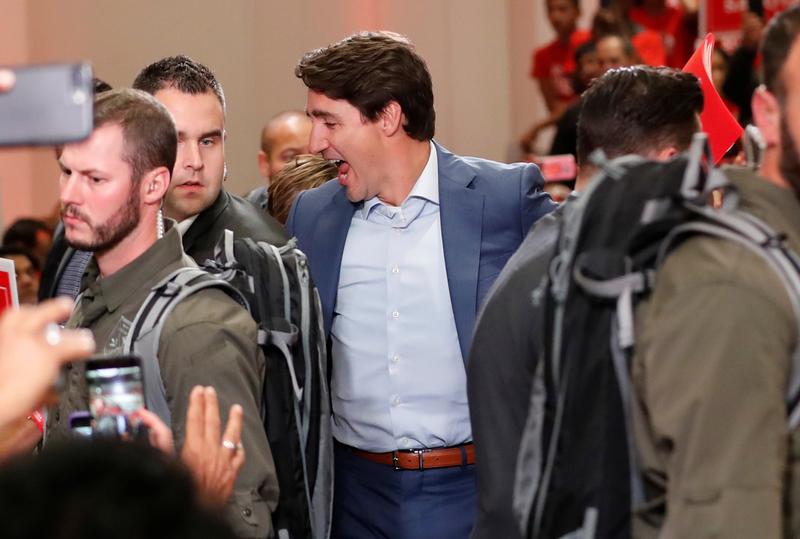 OTTAWA (Reuters) – The main rivals to Canada’s Liberal Prime Minister Justin Trudeau said a threat that forced him to wear a bulletproof vest at a campaign rally on Saturday was a concerning sign for the country’s democracy ahead of the Oct. 21 federal election.

Trudeau arrived 90 minutes late to a rally outside of Toronto wearing bulky protection under his shirt, a Reuters witness said, after he had received a security threat, Canadian Broadcasting Corp. reported.

It’s “very upsetting to hear that Justin Trudeau had to wear a bulletproof vest tonight at a campaign event,” Andrew Scheer, leader of the Conservative Party, said late on Saturday. “Threats of violence against political leaders have absolutely no place in our democracy.”

Scheer is Trudeau’s main rival ahead of the vote, and the two are in a statistical tie nationally, according to polls. But the left-leaning New Democrats (NDP) are gaining and could end up with the balance of power.

“Any threat made against Justin Trudeau, or any leader, is troubling to all of us. No matter how you vote or believe, no one should face threats of violence,” NDP leader Jagmeet Singh said.

Trudeau will go ahead with plans to campaign in the Ontario city of York north of Toronto on Sunday, said a Liberal official who declined to be named given the sensitivity of the situation.

At the Saturday rally, Trudeau still plunged into the crowd to shake hands and pose for photos as he usually does, but unlike in the past he was surrounded by bodyguards wearing large backpacks.