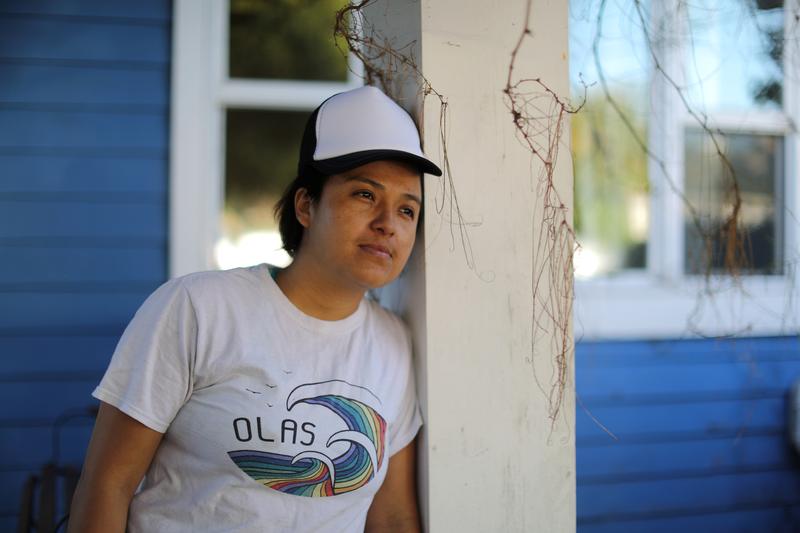 BERKELEY, Calif. (Reuters) – Marveny Suchite lives with her American immigration sponsor in a bungalow here on a tree-lined street. A neighbor’s yard sign reads: “No matter where you are from, we’re glad you’re our neighbor.”

Guatemalan asylum-seeker Marveny Suchite poses for a portrait outside the home in which she is staying in Berkeley, California, September 6, 2019. REUTERS/Lucy Nicholson

The 25-year-old from Guatemala takes English classes and gets bilingual children’s books from the library to learn even more. A daily highlight is walking her housemate’s cockapoo to the dog park, where, she says with a quick grin, the pet has some friends.

She is cheerful about her new circumstances – except, as she explains, tearing up: “Two important pieces of my life are missing: My wife and my son.”

Suchite left Guatemala last November in a hurry. She later told a U.S. asylum officer that flyers had been posted threatening her life because she’s a lesbian, according to the officer’s formal notes, reviewed by Reuters. Her mother warned her that people had come looking for her, Suchite told the officer, explaining they were “machistas” – men who are sexist. Suchite took off that day.

She had been attacked before, beaten and raped by close family members, then by strangers in an alley who vowed to “stop” her from being gay, according to the asylum officer’s notes. She recounted that she became pregnant from the alley assault and that when she tried to file a rape report with police, they laughed at her. Reuters could not independently confirm her account.

(For an interactive version see tmsnrt.rs/2VssPY7)

International human rights organizations have cited high rates of violence against women in Central America, both in the home and at the hands of gang members. That and widespread aggression toward gay and transgender people pushed many, like Suchite, to join recent migrant caravans.

“I don’t want you to come back,” Suchite recalls her mother saying. “I prefer you to be alive and far away than to be near and dead.”

In November 2018, she joined a U.S.-bound caravan in Mexico, alone among hundreds of strangers. She told nobody she was gay, until she met a transgender woman who noticed that she was dressed “like a boy,” she said.

From then on, she traveled with her and three other transgender women. “We took care of each other,” she said. They saved her life, she said, awakening her when she dozed off and almost fell from the roof of a moving train.

After she reached the border and asked for asylum, border officials in San Ysidro, California, took her to a cell where 40 people were packed together so closely they could barely move, she said. The theme song from the movie “Frozen” played nonstop over the speakers.

Transferred to the Otay Mesa Detention Center in nearby San Diego, she recalls the joy she felt on the drive, seeing the sky and the raindrops on the windshield after 10 days in detention.

She spent more than three months at Otay Mesa, an Immigration and Customs Enforcement (ICE) facility. A female guard in the cafeteria used to squeeze her breasts, Suchite told Reuters. She said she complained to the guard’s superior but was ignored. “When that officer was on duty, I’d rather go hungry,” she said.

Lauren Mack, an ICE spokeswoman, said all detainees at Otay Mesa detention center are given information underscoring the importance of reporting abuse, and forms are available in each housing unit.

In the spring, Diana Shapiro, a therapist and founder of a group that supports LGBT asylum seekers in the San Francisco area, offered to house and provide for Suchite until her asylum claim is decided, likely next year.

Once her work permit comes through, Suchite said, she hopes to paint houses or repair telephone lines. She likes the adrenaline rush of climbing up high. In Guatemala, she worked as a zipline instructor.

Eventually, she hopes to bring her family to the United States – her 4-year-old son and the woman she calls her wife, with whom she has been for five years. But Guatemala does not sanction gay marriage, and U.S. immigration policies have hardened under the Trump administration even for officially married couples.

For now, she video chats with her family for hours daily. At bedtime she sings her son a lullaby – though the reception is not always good. On a recent day, she told him over and over how much she loved him.

She couldn’t hear his response.