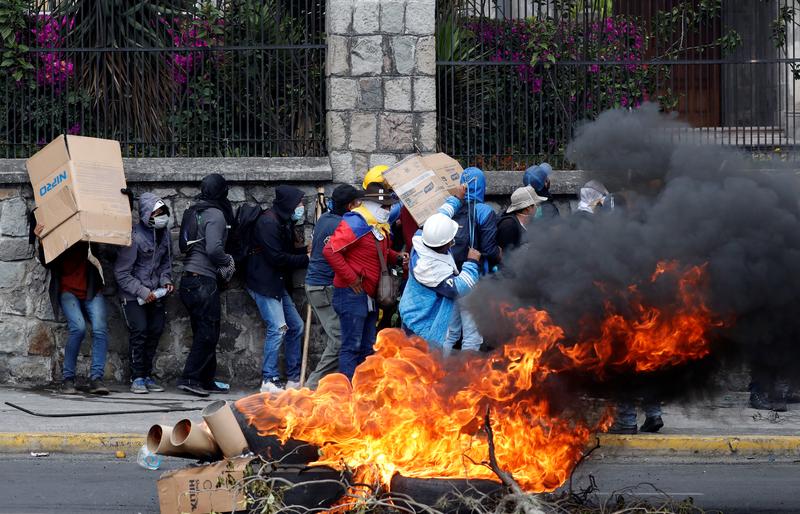 QUITO (Reuters) – An indigenous group in Ecuador that has led massive protests to reinstate a fuel subsidy said on Saturday that it has decided to hold direct talks with President Lenin Moreno, the first sign of a potential breakthrough in a dispute that has triggered more than a week of unrest.

The back-to-back announcements came as the highland capital of Quito was rocked by a tenth day of clashes over Moreno’s austerity plan, a key part of his efforts to rein in the fiscal deficit after signing a $4.2 billion loan deal with the International Monetary Fund (IMF).

Downtown Quito resembled a war zone as plumes of tear gas clouded streets littered with bricks and small fires and groups of people huddled behind walls and makeshift barricades for protection.

Police fired tear gas at protesters gathered at the country’s parliamentary building and access roads to Quito’s airport were reported blocked by the airport authority.

Local TV reported that people had set fire to the building of the country’s comptroller, showing images of it enveloped in smoke.

At least four people have been killed in the unrest and hundreds have been wounded and arrested.

Oil wells have been closed by protesters in parts of the country, curbing production of more than 1 million barrels of crude so far, the energy ministry said on Saturday.

A Chinese-owned copper mine announced it was temporarily limiting its operations as a precautionary measure.

The IMF has long been a lightning rod for conflict in Latin America. Argentine President Mauricio Macri was trounced in an August primary vote amid stiff opposition to an IMF deal he signed last year.

Reporting By Alexandra Valencia and Alberto Fajardo in Quito, Additional Reporting and Writing By Mitra Taj; Editing by Bill Berkrot