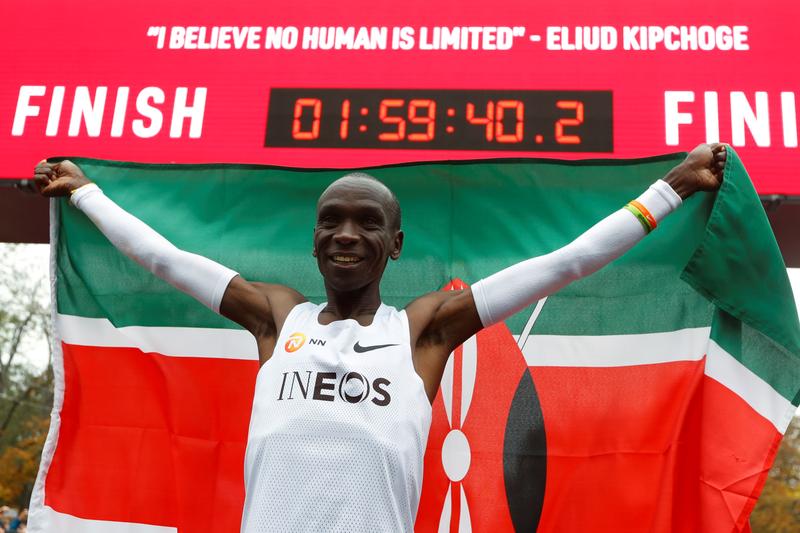 VIENNA (Reuters) – Kenyan Eliud Kipchoge made athletics history on Saturday when he became the first person to run a marathon in under two hours, stretching the limits of human endeavor and passing a milestone few thought could be reached for decades if at all.

Guided by green laser beams shone onto the road and helped by 41 world class athletes choreographed into rotating teams of pacemakers, the Olympic champion and world record holder smashed the barrier by 20 seconds, finishing in one hour 59.40 minutes.

It was regarded as the biggest achievement in athletics since Briton Roger Bannister broke the four-minute mile in 1954 and was likened by Kipchoge himself to landing on the moon.

“Today we went to the moon and came back to earth! I am at a loss for words for all the support I have received from all over the world,” he said.

However, it was not recognized as a world record by the sport’s governing International Association of Athletics Federations (IAAF) as it was not in open competition and used rotating pacemakers.

As the pacemakers peeled away for the last kilometer, Kipchoge accelerated down the final straight, smiled and pointed at people in the crowd who gave him a rousing reception.

Barely sweating, the 34-year-old looked as if he had completed a quiet morning run as he reflected on his unique achievement.

“From the first kilometer, I was really comfortable,” he said after before being mobbed by his team mates.

“I have been training for this for four and a half months, I have been putting my heart and mind to run under two hours for a marathon and make history.

“I am feeling good. After Roger Bannister it took another 65 years to make history,” he added. “Now I’ve gone under two hours to inspire other people and show the world nobody is limited.”

Although the IAAF did not recognize the run, its president, Sebastian Coe, had said he was in favor of such events and argued that it was not a huge issue if they were not recognized by the sport’s governing body.

There was unbridled joy in Kipchoge’s homeland as thousands of people celebrated on the streets. “We don’t even have the words to explain it, it is such a proud moment. We are super, super proud to be Kenyan,” said one.

In Nairobi, traffic stopped with people gathering in bars and anywhere with television screens as national hero Kipchoge closed in on completing the stunning achievement.

The run, organized and funded by the British chemical company INEOS and dubbed the INEOS 1.59 challenge, was Kipchoge’s second attempt to break the barrier, having missed out by 26 seconds in Monza two years ago.

The 9.6 kilometer course, a long straight with two loops at the end, was designed with slightly steeped banks and had been partially resurfaced to help Kipchoge keep pace and avoid injury.

The venue and time were carefully chosen by organizers to provide the best-possible conditions — cool and windless — although it was slightly more humid than expected and there were a few spots of rain.

The pacemakers were divided into teams of seven, with five forming an inverted arrowhead in front of Kipchoge and two more behind him and running in stints of 4.8 kilometers.

The transitions between pacemaking teams proved to be one of the most challenging aspects of the run and Kipchoge seemed to trip during one exchange.

They were preceded by an electric car which shone green laser beams onto the road to show the right pace and keep the runners on the right lines.

Throughout the run, Kipchoge ran at a remarkably steady pace which varied between 2.48 and 2.52 minutes per kilometer and was consistently around 10 seconds under the target.

There was a stretch around the halfway mark where he seemed to be struggling but he quickly regained his composure.

“I was really calm and trying to go with the pace, not to be crazy or slow, but to follow instructions and what the pacemakers are doing,” he said, adding that the achievement meant a lot of his homeland.

“Everyone can step out of their door and think positively.”